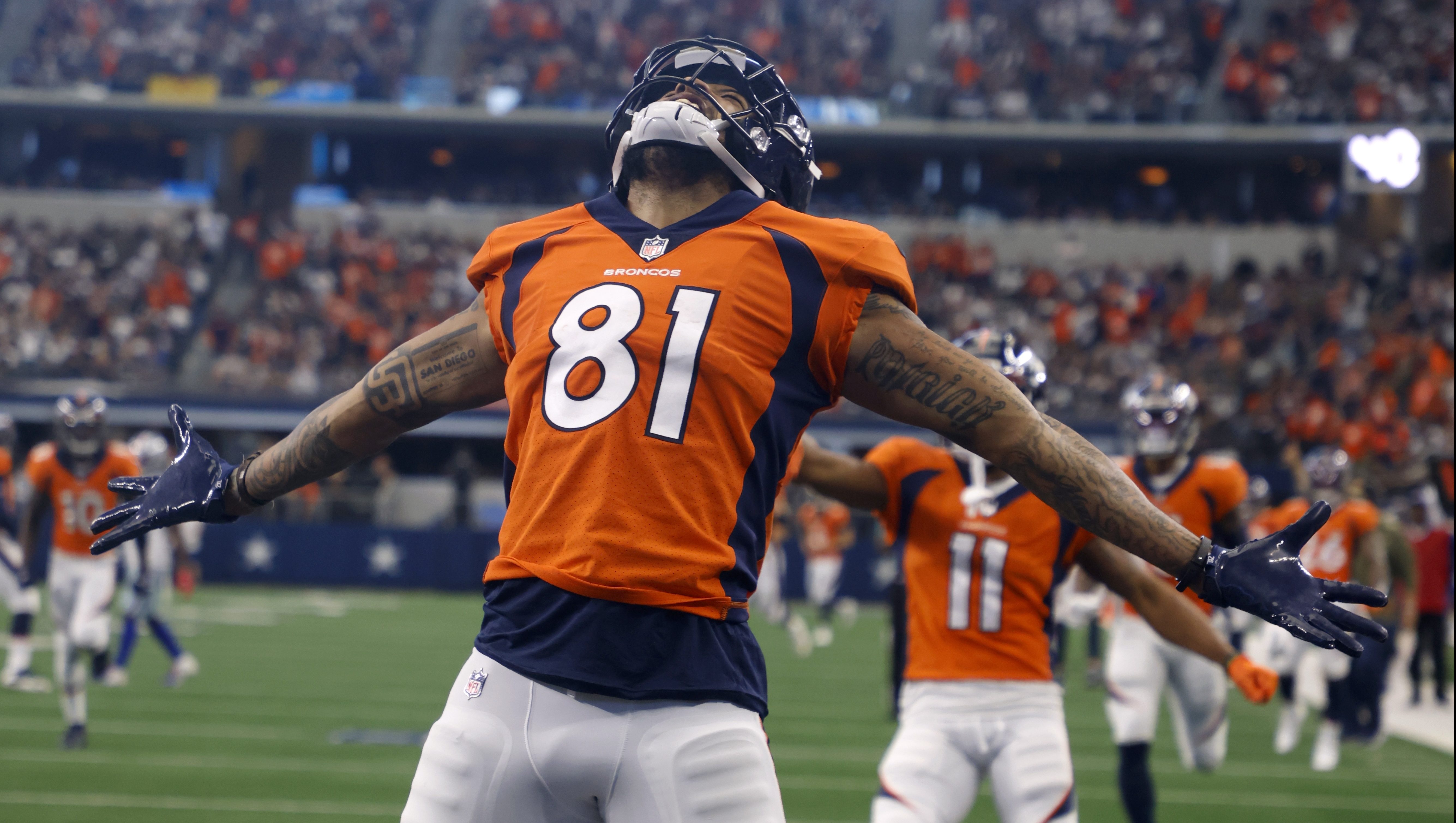 ENGLEWOOD, Colo. (AP) — George Paton swears that committing $90 million to wide receivers Courtland Sutton and Tim Patrick over the weekend wasn’t about making Denver an attractive landing pad for a veteran quarterback in 2022.

“No, we’re just trying to get better as a football team and win games,” the Broncos’ first-year general manager insisted Monday.

The extensions mean the Broncos’ top four receivers — Patrick, Sutton, Jerry Jeudy and KJ Hamler — are under contract through 2023.

And that fact could certainly help lure a veteran QB to Denver and jolt the Broncos back into relevancy like Peyton Manning did in 2012.

Another magnet? A strong finish, so that the Broncos (5-5), even if they miss the playoffs again, can show they’re on the verge of breaking out of their prolonged funk that dates to Manning’s retirement in 2016.

Both Patrick and Sutton have been in Denver since 2018 and have yet to see a winning record, much less make the playoffs.

“We might not have put ourselves in the best situation so far, but the only thing we can control is what’s ahead of us,” Sutton said. “It’s hard to even put into words how bad we want that, and how bad we want that for us, the team and for the city. It’s been way overdue for the city to be able to have a playoff game here and the Broncos in the playoffs.

“Our job is to make sure that we’re doing everything we can to put ourselves in position to get in playoffs regularly.”

That’s Paton’s job description actually, and he’s making a strong case for NFL Executive of the Year as a rookie GM.

His flurry of deals around the trade deadline, including the deal that sent Von Miller to the Rams, left him with 11 draft picks next April, including five in the top 100.

Getting Sutton and Patrick to take hometown discounts in 2021 means he’ll still have about $70 million in projected salary cap space in the offseason.

And all the ammo to finagle a veteran QB if he surveys the college crop and decides none of them are worth the investment.

The top candidates for a change of scenery all have some heavy baggage:

Aaron Rodgers missed the entire offseason in a beef with Packers management and returned to Green Bay with a heavy hint that this would be his farewell season in Wisconsin. He led the Packers to a terrific start, but a COVID-19 infection sidelined him for a showdown at Kansas City and revealed his deception about being vaccinated, which led to the NFL fining him and the Packers.

Although the Packers are 8-3, Rodgers said after Green Bay’s 34-31 loss at Minnesota on Sunday that a toe injury that prevented him from practicing very much last week was aggravated when he got stepped on.

“It’s very, very painful. I got stepped on in the first half, and that kind of activated all the symptoms that I was having,” said Rodgers, who turns 38 next month. “It’s going to be another painful week next week, and then hopefully I can get healed up during the bye.”

Deshaun Watson started asking for a trade from the Texans right after the 2020 season ended, but about two months later a flurry of sexual assault and misconduct cases during massages came to light.

Watson has not been charged with a crime and has denied all wrongdoing. The Texans have been paying Watson not to play, placing him on the inactive list each week. The league hasn’t disciplined him yet.

A deadline deal to send him to the Dolphins never materialized. Assuming the cases go forward, Watson is scheduled to be deposed Feb. 22, or about three weeks before the new NFL league year starts — which is the next opportunity for the 26-year-old QB to be officially traded.

Russell Wilson, who turns 33 next week, also seems ready for a second chapter to his career. But he hasn’t thrown a touchdown pass in his two games since rushing back from a severe injury to his middle finger on his throwing hand that required surgery and forced him to miss several games for the first time in his career.

In his return from a three-game absence, Wilson completed just 20 of 40 passes for 161 yards and two interceptions in Seattle’s 17-0 loss to Rodgers and the Packers in Green Bay. It was the first time the Seahawks were shut out in Wilson’s 150 regular-seasons starts.

Then, on Sunday, he completed 14 of 26 passes for 207 yards in a 23-13 loss to the Cardinals and backup QB Colt McCoy. With seven games left, Seattle (3-7) has already equaled its most losses in any season with Wilson and is likely to miss the playoffs for just the third time since Pete Carroll’s arrival in 2010.

Still, Rodgers, Watson or Wilson would be seen as an upgrade in a quarterback town that’s run through 11 starting QBs since Manning went 50-14 in his four seasons in Denver.