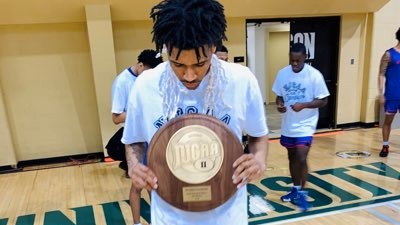 OKLAHOMA CITY, Okla. — Every basketball team has a designated star player. The person they look up to in difficult times or when a resurgent spark is needed during a tight game. There are instances when the team has no pronounced star and the collective speaks for itself. But there are also occasions when the team has a duo or even a trio of stars that can help lift the team in dour times. At Oklahoma City University (OCU), there’s the emergence of a duo that are carrying the team to glory. One half of that partnership is Kori Guest.

The 6-foot-6 guard from Tulsa, Oklahoma, has been with the OCU Stars from the moment he graduated high school. For the last two seasons, he’s been one of the focal points on this team in terms of scoring. Last season, Guest led the team with 14.0 points per game. He shot the ball efficiently, too, where he had a field goal percentage of 42.7% and 40.7% from the three-point line. Those are some solid percentages for someone who’s part of a tandem in the offensive set. But Guest also was a great contributor defensively. He had team-highs in steals (9) and blocks (4). His all-round game merits to be praised and was inevitably rewarded by the coaches this season.

Guest has started in all of the games where he’s averaging 28.5 minutes per game. While he’s made the most threes, he has also taken 20 more attempts. He’s averaging 36.8% from beyond the arc and 40.2% from the field. Those numbers are down from last year’s totals and it has affected his points per game average which now stands at 12.4. On the bright side, he still leads the team in steals with 10 and has improved his free throw percentage which was at 75.0% and is now at 80.0%.

There shouldn’t be any concerns, barring injury, with Guest for the OCU Stars. He’s aware he can shoot better and wants to improve. He comes from a strong basketball lineage where his father was once a basketball player at Northeastern Oklahoma A&M and, naturally, wants to do well. Given Guest’s history, it comes as no surprise that the young guard can improve and would want to preserve his place as one of the two players that his teammates look for when a surge is needed. He’s a player who loves basketball and when the adoration is that strong, there’s no hurdle or obstacle that is insurmountable.