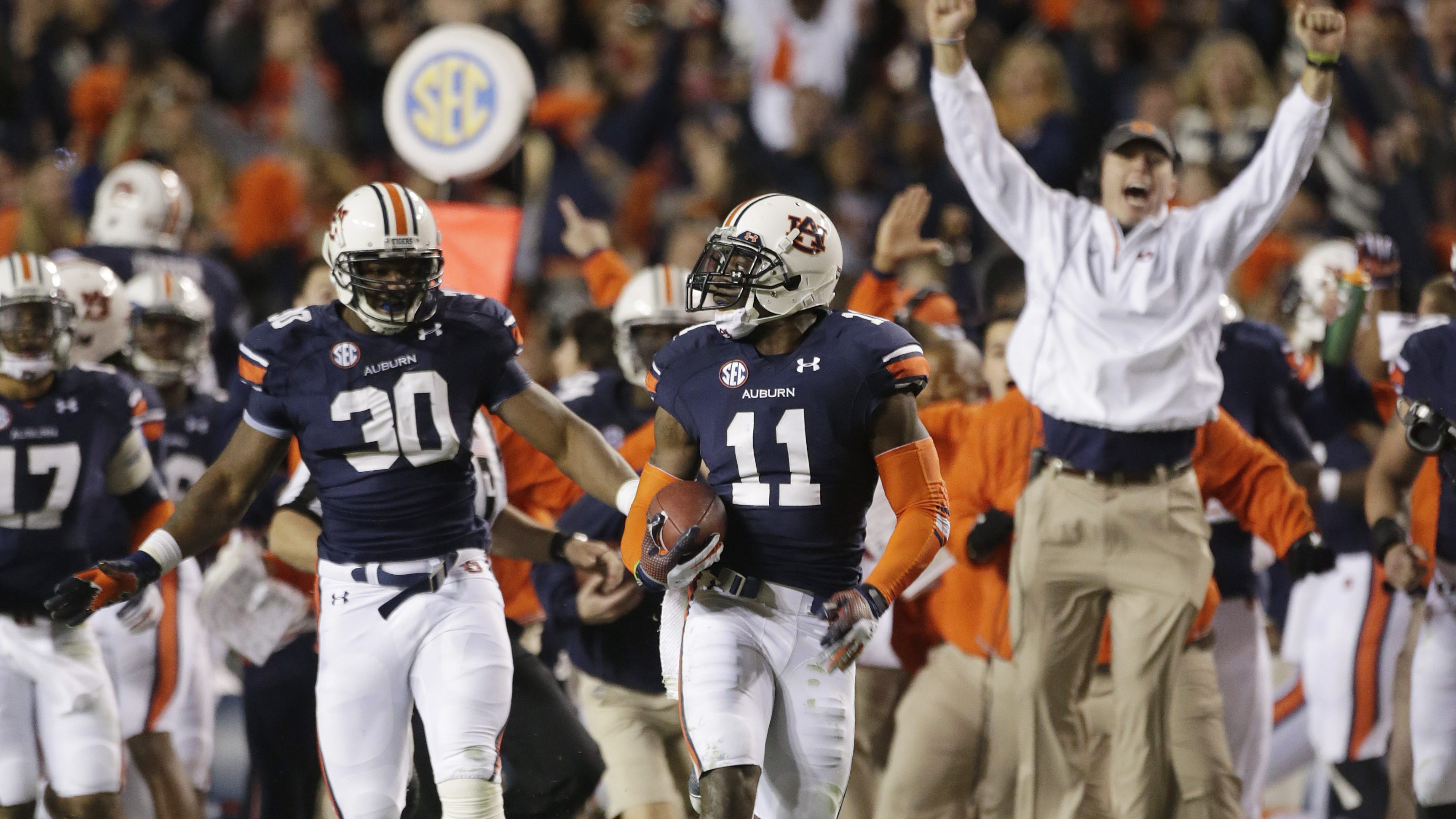 Auburn cornerback Chris Davis (11) returns a missed field goal-attempt 100-plus yards to score the winning touchdown as time expires in the fourth quarter of an NCAA college football game against No. 1 Alabama in Auburn, Ala., Nov. 30, 2013. Davis returned the Alabama field goal-attempt that came up short from the back of his own end zone for a touchdown on the final play to send the fourth-ranked Tigers to the 2013 Southeastern Conference title game and eventually the BCS championship game. (AP Photo/Dave Martin, File)

The best college football rivalries can change over time depending on the state of the programs involved.

Go back 25 or 30 years and Miami-Florida State probably would have been near the top of most lists. Nowadays, while still heated and entertaining, ‘Canes-’Noles just doesn’t capture the attention of the nation the way it did when at least one those two was at the top of the sport.

Of course, some rivalries have just gone away altogether. For decades, Nebraska-Oklahoma was a lock to be one of the biggest games of the season. Texas-Texas A&M, too. Conference realignment has relegated those to the history books.

The Associated Press asked 42 sports writers and broadcasters to rank the five best rivalries in college football, with points given on a sliding scale (five for a first-place vote, four points for second, etc.).

Four longstanding series separated themselves from the rest according to the results released Tuesday. The top two, as it happens, will be renewed this weekend, with high stakes on the line for three of the four teams involved.

Signature moment: The Kick-Six, one of the most memorable plays in the history of college football. Top-ranked Alabama was tied with Auburn at 28-28 and challenged to get 1 second put back on the clock for a 57-yard field goal try that came up short. Auburn’s Chris Davis fielded the kick from the back of his own end zone and sprinted up his own jubilant sideline for a touchdown on the final play to send the fourth-ranked Tigers to the 2013 Southeastern Conference title game and eventually the BCS championship game.

Biggest upset: In 1972, No. 7 Auburn beat No. 2 Alabama on the strength of two blocked punts in what would become known as the “Punt ‘Bama Punt” game.

Reward: Before the Big Ten split into divisions in 2011, the winner of the Michigan-Ohio State game earned the conference title 22 times. Bragging rights for these two massive fan bases also cannot be underestimated.

Signature moment: No. 1 Ohio State and No. 4 Michigan played to a 10–10 tie in Ann Arbor in 1973, creating a deadlock atop the Big Ten standings. The treasured Rose Bowl bid came down to a vote of conference athletic directors, won by Ohio State. Michigan’ coach Bo Schembechler never got over it.

Biggest upset: In 1969, the Buckeyes entered the season finale No. 1 in the country and unbeaten, with eyes on a national titl. They were knocked off by a Michigan team that came in 7-2. This game kicked off what is known as the Ten Year War in the rivalry between Schembechler and Ohio State coach Woody Hayes.

Reward: Commander-in-Chief’s Trophy, though Air Force also gets a say in where that resides.

Signature moment: Less than a month after President John F. Kennedy was assassinated in 1963, Army-Navy played what turned out to be one of their most memorable games. Trying to upset Heisman winner Roger Staubach and the second-ranked Midshipmen, Army reached Navy’s 2-yard line, trailing 21-15 in the closing seconds, but time ran out

Biggest upset: No. 2 Army was unbeaten under Hall of Fame coach Red Blaik entering the 1950 game with 2-6 Navy and carrying a 28-game winning streak. The Midshipmen won 14-2 and the rivalry began to shift in Navy’s favor after a string of six years when Army didn’t lose.

Signature moment: Texas coach Darrell Royal accused Oklahoma and coach Barry Switzer of spying on his practices leading up to the 1976 game, which ended in a 6-6 tie and wound up being Royal’s last in the rivalry. Years later, Switzer conceded in his autobiography, that, yes, there was some spying going on for OU. The 1984 game was a memorable 1-2 matchup that ended 15-15. This year’s wild Sooners’ win deserves an honorable mention.

Biggest upset: In what turned out to be Mack Brown’s last season as Texas coach, the 3-2 Longhorns beat the No. 12 Sooners 36-20 behind backup quarterback Case McCoy.

Signature moment: The Gator Stomp. After scoring a touchdown early in the 2007 matchup, Georgia players participated in a full-team, end-zone celebration, incurring a 15-yard penalty that didn’t bother Bulldogs coach Mark Richt one bit. The next season, Florida coach Urban Meyer used two late timeouts with his team up 49-10.

Signature moment: In 2019, after scoring a potential game-tying touchdown for Ole Miss, receiver Elijah Moore celebrated by mimicking a dog lifting his leg to urinate in the end zone. The move drew a 15-yard penalty, pushing back the extra point try — which was missed to give Mississippi State a 21-20 victory. Ole Miss fired coach Matt Luke within days, but the victory helped Mississippi State coach Joe Moorhead keep his job — for about a month. He was fired after team’s bowl game.

Biggest upset: In 1970, Ole Miss was 7-1, No. 10 in the country, bowl-bound and trying to finish the season strong despite having lost star quarterback Archie Manning earlier in the season to a broken arm. The Bulldogs won 19-14 in Oxford to snap a three-game losing streak,

Nickname: None, though it is often called college football’s most storied intersectional rivalry.

Signature moment: The Bush Push in 2005. Defending national champion USC had won 27 straight games, but the Fighting Irish had the Trojans in trouble in South Bend. Quarterback Matt Leinart sneaked in from the 1-yard line with a big push — against the rules at the time — from star tailback Reggie Bush for the winning TD.

Biggest upset: In 1964, Notre Dame was unbeaten, No. 1 and lined up to win a national championship when unranked USC rallied from 17-0 down and scored the winning touchdown with 1:35 left in the game on a fourth-and-8.

Reward: Used to be a chance to play for a national title. Now, the winning head coach gets to keep his job.

Signature moment: Wide right. In consecutive seasons (1991-92), the game was a matchup of top-three teams. T he Seminoles missed crucial field goals in the waning seconds in both — wide right each time — to give Miami victories that propelled the Hurricanes to a chance to play in a bowl game with a national championship on the line.

Biggest upset: Florida State was No. 1 in the country when it opened its season against No. 6 Miami in 1988. The upset itself wasn’t so stunning as much as how it went down. The ‘Canes dominated 31-0 and went on to finish No. 2 in the country. The ’Noles didn’t lose again and finished No. 3.

Dereon Seabron goes from a role player to star for North Carolina...
Close losses haunt Canyon Cougars’ season
Jackson Flottmeyer had career year but is already thinking about ...
The Josh Heupel effect is in full swing at Tennessee
Stan Fenn: A seasoned golf coach
Colorado State Rams’ valued guard Isaiah Stevens
Phillip Mason experiences unique path in journey to Tennessee
It’s the last week of fantasy football, here is how to get ...
Attention to detail and gratitude the keys to Smith Women’s hoo...
Saguaro, Devon Dampier embracing role of ‘underdogs’ ahead of...
Visalia Rawhide: Where legends are made
Darryl Thomas: Taking Upland football to greater heights