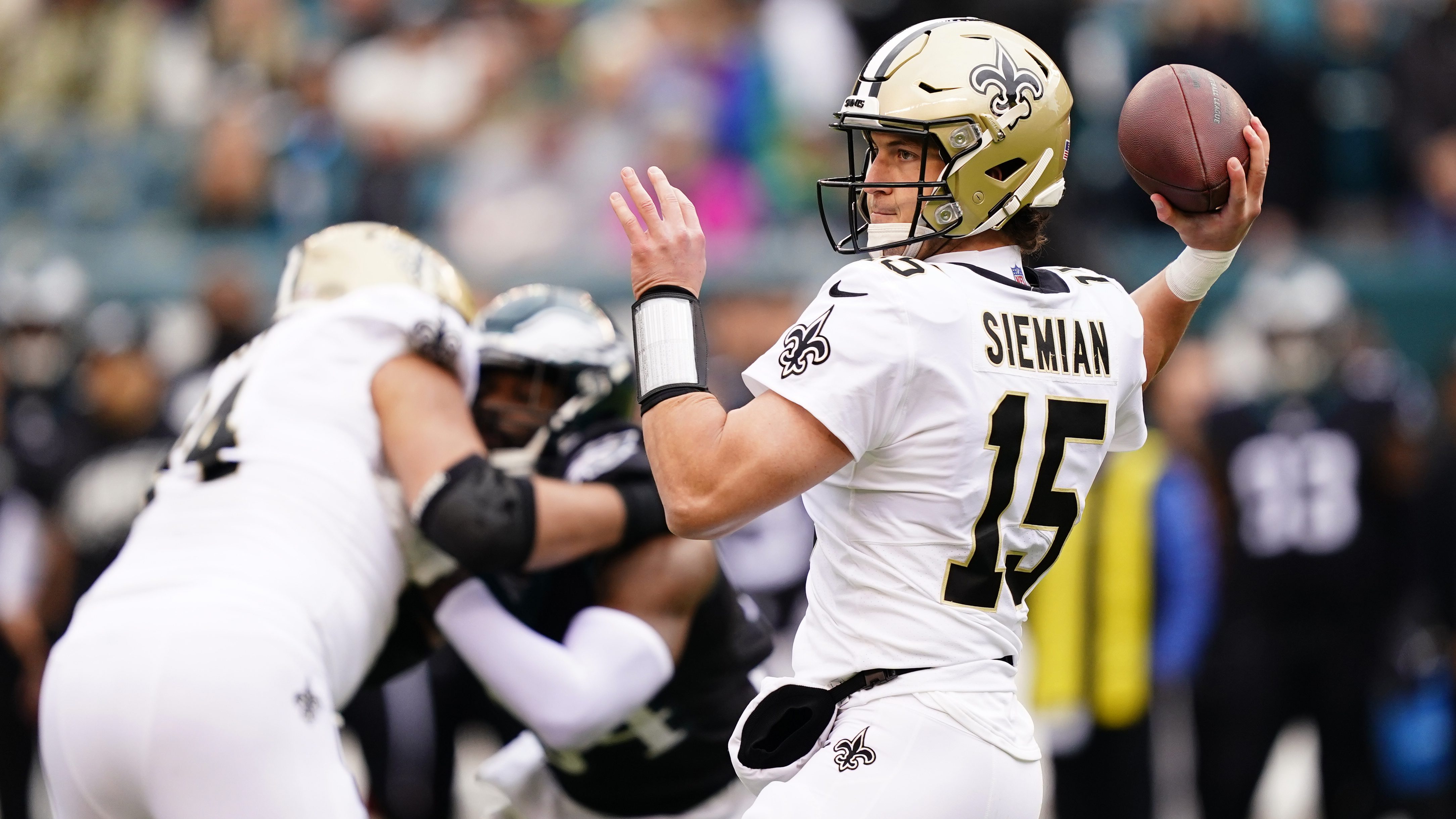 New Orleans Saints' Trevor Siemian passes during the first half of an NFL football game against the Philadelphia Eagles, Sunday, Nov. 21, 2021, in Philadelphia. (AP Photo/Matt Rourke)

NEW ORLEANS (AP) — Very little has come easy for the New Orleans Saints this season, particularly in the Superdome, where they’ve lost twice after leading in the final minute of regulation.

Despite that and the three-game slide they’re currently on, the Saints (5-5) are in the thick of the NFC playoff picture heading into a Thanksgiving night home date with the Buffalo Bills (6-4), who’ve had their own stumbles lately.

“Losing wears on a team. Losing is tough,” said Saints offensive lineman James Hurst, who has been thrust into starting roles at both tackle and guard for injury-plagued New Orleans this season. “It’s easy to make excuses, but the type of guys we have in our locker room aren’t looking to make excuses.

“Everyone is just looking at their job, trying to understand what they can do better,” Hurst added. “Everyone is really accountable for that and I think that’s all you can really ask for.”

Veteran Mark Ingram has been New Orleans’ primary running back in Kamara’s absence, but now he’s showing up on the injury report with an ailing knee and missing practice time as well.

That has only complicated matters for quarterback Trevor Siemian, who’s lost his first three starts since being pressed into a regular starting role because of Jameis Winston’s season-ending knee injury.

“Any time we’re not winning, you are always self-reflecting, saying, ‘Hey, what can I do to get us over the edge and get some wins rattled off.’ The answer is: I have to play a little better at times,” said Siemian, who threw his first two interceptions in last Sunday’s loss at Philadelphia. “Me and everybody else haven’t played good enough to win. … But I’m looking forward to playing this week.”

The Bills have lost two of three, including a stunning 9-6 defeat against Jacksonville and a surprisingly uncompetitive 41-15 drubbing — at home — against Indianapolis last week.

But quarterback Josh Allen said that while the Bills are making corrections from last Sunday’s loss, they’re not dwelling on it.

“You can’t feel sorry for yourself; you can’t let one week affect another,” Allen said. “We’re excited to get out there on Thursday and try to be the team that we know we can be. That’s a team that’s willing to do whatever it takes to win a football game.”

The Saints’ defense was No. 1 in the NFL against the run until facing Eagles dual-threat QB Jalen Hurts last Sunday and giving up 242 yards rushing.

Buffalo’s Allen also has built a reputation as an adept scrambler.

“There’s plenty of areas that we can improve on — some areas that we thought we were better in,” Saints defensive end Cam Jordan said, calling Philadelphia’s rushing totals “embarrassing.”

Buffalo receiver Stefon Diggs, who caught 127 passes for 1,535 yards and eight TDs last season with Buffalo, has seen his production dip somewhat this season, but doesn’t sound concerned as he prepares to face the Saints’ 22nd-ranked pass defense.

“I’m trying to be the best teammate that I can be,” said Diggs, who has a still formidable 60 catches for 773 yards and six scores this season. “I want to be that spark for my team, and I want to be the reason my team is catching momentum. I believe that I can do that.

“As far as getting the ball or not getting the ball, I can only do so much,” Diggs added. “So, I kind of control what I can control and when I’m given opportunities, I’m going to take full advantage.”

After seeing a string of fourth-quarter comeback bids fall short during their losing streak, New Orleans is focused on starting faster offensively. The Saints have failed to score any first-quarter points in their past three games and have just 13 first-half points during that span.

“I’ve just got to play better in the first half specifically,” Siemian said. “I’m not going to press or anything, but … I’ve got to do a better job on early and put us in a position to play fast early on in the ballgame.”

Facing the Saints reminds Diggs of one of the most extraordinary moments of his NFL career. His 61-yard, winning TD catch for the Minnesota Vikings as time expired in a January 2018 playoff game against New Orleans became known as the “Minneapolis Miracle.”

“That’s something that I’m always going to be looking back like, ‘Damn, I’m gonna tell my kids that one day,’” Diggs said this week. “And they probably won’t believe me, but I’m like this: ‘Look, we’ve got some video of it.’

But Diggs also notes that joy was short-lived because the Vikings lost the following week to eventual Super Bowl champion Philadelphia.

“Now, I’m trying to focus on something a little bit bigger,” he said.