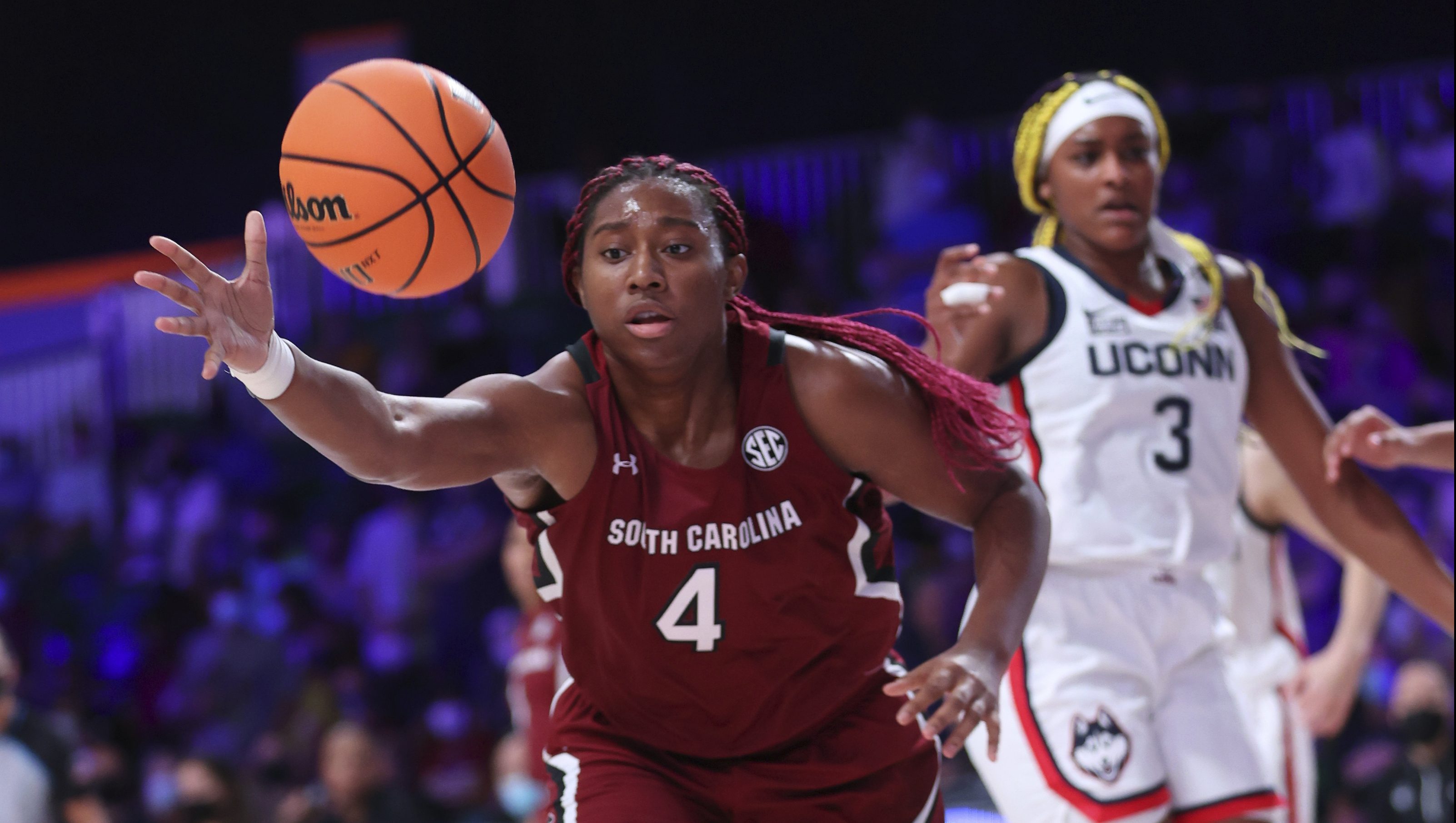 PARADISE ISLAND, Bahamas (AP) — Aliyah Boston spent the offseason working on her fitness to be able to excel late in games.

It’s already paid off for South Carolina’s star post player, who was dominant in the final quarter of the No. 1 Gamecocks’ victory over UConn on Monday. She finished with 22 points and 15 rebounds and came up with a few big plays in the fourth quarter when South Carolina ran away from the Huskies.

“This year she self-evaluated and said, ‘Hey, I’m out of shape,’” South Carolina coach Dawn Staley said. “She said she dropped some 23 pounds.”

Boston did it by cutting out many of the comfort foods she really enjoyed, like ice cream.

“It’s been a challenging process,” she said. “I felt sluggish (last year) and I felt like I couldn’t really move. I started focusing on more what I need to do to figure out how to lose weight.”

She not only improved her conditioning, but also worked on her game. She spent time with San Antonio Spurs great Tim Duncan in Texas working out. Boston’s family is friends with one of Duncan’s really good friends.

It was a thrill for Boston, who like Duncan was born in the U.S. Virgin Islands. Boston was born in St. Thomas, while Duncan hails from St. Croix.

“Growing up in the islands there aren’t a lot of people that made it to the NBA,” she said. “He was definitely someone I looked up to. To go work out with him in person was amazing. We wanted to do it earlier in the year, but because of COVID it wasn’t the right decision to do it then. I learned a lot from him.”

Boston said she was in disbelief when she found out she could work out with Duncan. Like the NBA Hall of Famer, Boston is skilled on both sides of the ball. She takes pride in her defense and has increased her offensive prowess.

This year the junior forward is averaging 14.8 points, 7.7 rebounds and 2.2 blocks a game. While the numbers aren’t as eye-popping as some of the other preseason AP All-Americans, Staley isn’t worried because she knows her star will shine bright in the biggest games.

“We don’t have to lean on her that way,” Staley said. “When we do, she’ll come through for us. This was a good week for her to have stats that are really meaningful.”

Boston took 19 shots against UConn and made 10, including a 3-pointer. She had four points and three rebounds in the final quarter as the Gamecocks outscored the Huskies 16-3.

“She’s always looked big picture, always had a pro mentality,” Staley said. “She’s a young junior and the big-picture stuff is so far away.”

Staley knows the 6-foot-5 Boston will continue to develop and isn’t afraid to say she’s the best player in the country. It’s hard to argue with that right now.

“It’s time for Aliyah Boston to be the dominant player that she is,” Staley said. “I think she sells herself short a lot of the time, so we have to get in her. She’s to be dominating because she’s a dominating player.”