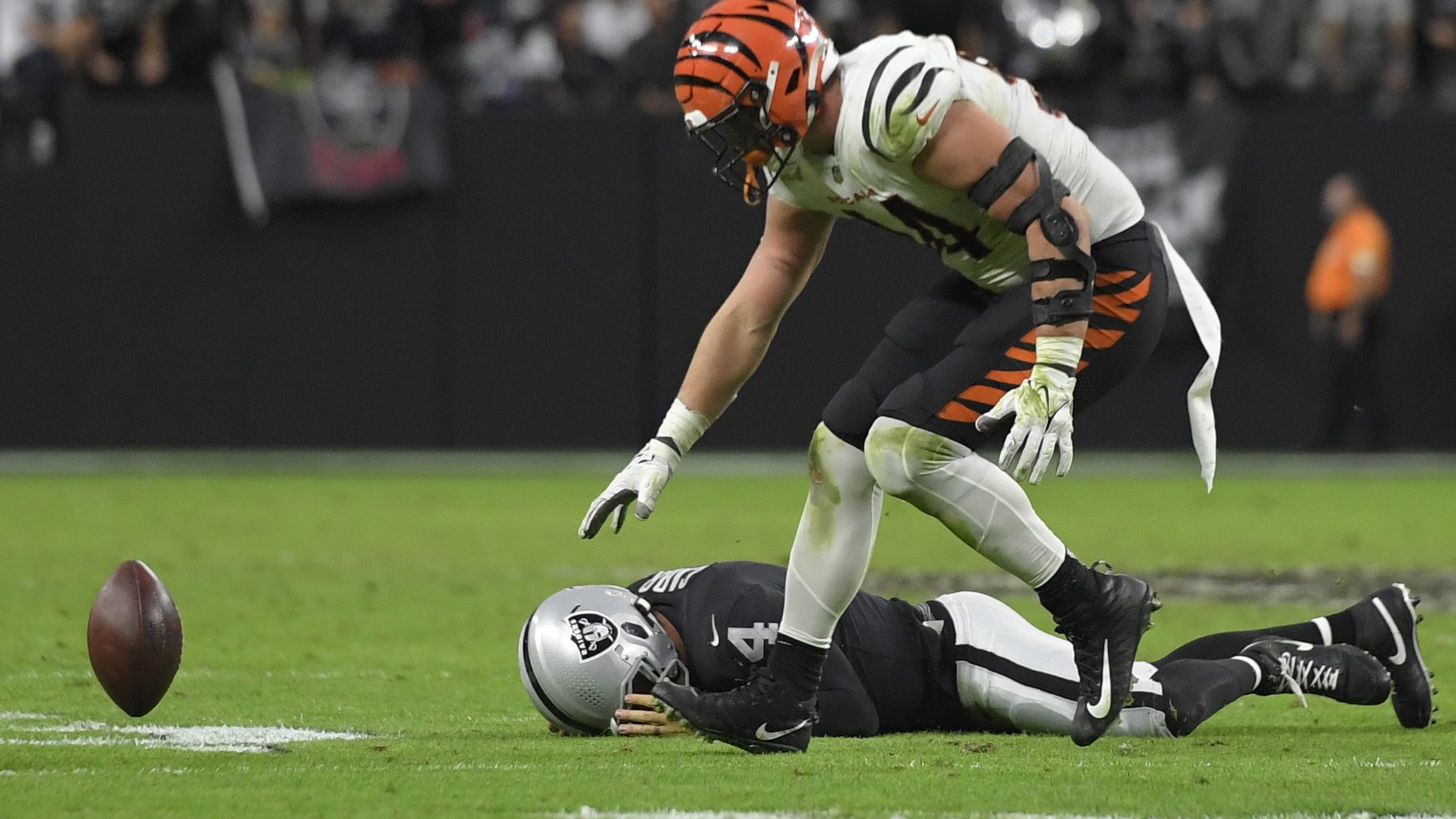 ARLINGTON, Texas (AP) — The Dallas Cowboys and Las Vegas Raiders have one victory between them in November and one more chance do something about it before the playoff push time also known as December.

Just so happens they’re playing each other on Thanksgiving.

So forget about Dallas receiver Amari Cooper playing his former team for the first time Thursday — a positive COVID-19 test and his vaccination status took care of that. And interim coach Rich Bisaccia probably won’t spend much time thinking about his return to the place he left to join the Raiders three years ago.

The NFC East-leading Cowboys (7-3) want to bounce back at home coming off a poor offensive showing, just as they did a week and a half ago against Atlanta. The Raiders (5-5) need to end a three-game losing streak that cost them first place in the AFC West.

“I don’t know the right wording for it, but there’s definitely a feeling of, ‘Enough is enough. We’ve got to win,’” Las Vegas quarterback Derek Carr said. “It’s a big game because it’s the next game. But what an opportunity for us to get back on track on the road in a hostile environment against a really good football team.”

Dallas fell behind by 30 against double-digit underdog Denver in a 30-16 loss before routing the Falcons 43-3. Now the Cowboys are coming off a 19-9 loss to Kansas City in which the NFL’s No. 1 offense, with sub-par showings from quarterback Dak Prescott and the running game, didn’t score a touchdown.

The expected return of left tackle Tyron Smith, who missed three games with an ankle injury, could be the boost the Cowboys need.

“As we head into the latter part of the season, we got to start getting this thing back rolling,” said running back Ezekiel Elliott, who took another shot against the Chiefs to a right knee that’s been bothering him for weeks. “It’s time we start firing on all cylinders.”

The common theme in the Raiders’ losing streak has been poor play on third down on both sides of the ball. Over the past three weeks, Las Vegas ranks last in the NFL with a 21.4% third-down conversion rate on offense and 31st on defense, allowing 53.5%. The Raiders had 14 straight unsuccessful third downs on offense the past two games between converting their first try against Kansas City and their last against Cincinnati.

“I put it all on me. I got to be better,” said Carr, whose team was outscored 73-27 in the losses to the Chiefs and Bengals. “If I’m better, we’re all better. That way we’re not down multiple scores late in games.”

Cooper, acquired from the Raiders for a first-round pick midseason in 2018, is Dallas’ most reliable receiver but now will miss a second consecutive game because NFL protocols require unvaccinated players to be sidelined at least 10 days. Owner and general manager Jerry Jones, while calling Cooper “one of the highest character guys you will ever be around,” wasn’t pleased about it.

“It said it early,” Jones said on his radio show this week. “You check ‘me’ at the door in a football team. That has nothing to do with the issues of masking, not masking, getting vaccinated, not getting vaccinated. The facts are it is a ‘we’ thing when you walk into the locker room, and anybody is being counted on to pull his weight.”

Bisaccia, who took over when Jon Gruden resigned after old emails with racist, misogynistic and homophobic comments surfaced, had his second-longest NFL tenure with the Cowboys from 2013-17. He led special teams then as well. Bisaccia’s longest stint was nine seasons with Tampa Bay (2002-10).

Thanksgiving week was difficult for the Cowboys a year ago. Strength and conditioning coach Markus Paul collapsed in the weight room and died at a hospital a day later, about 24 hours before the Cowboys lost to Washington 41-16. Coach Mike McCarthy led a discussion of Paul in a team meeting Tuesday.

“From my perspective, we want to make sure his legacy carries on. It’s important to all of us,” McCarthy said. “We have 84 players in the locker room, and 40 of the players were not here last year. Clearly I was talking more to the new players just to understand who he was and what he’s meant to us.”

After committing 14 false starts the first nine games, Las Vegas was clean on offense against the Bengals with the only penalty on that unit coming when Josh Jacobs was flagged for unnecessary roughness after an interception. But the defense had three key penalties that helped extend drives that led to scores for the Bengals, including one for lining up in the neutral zone and two personal fouls.

“It was concentration penalties, it was alignment penalties, apparently it was just a cornucopia of penalties,” Bisaccia said. “We just didn’t do a very good job.”