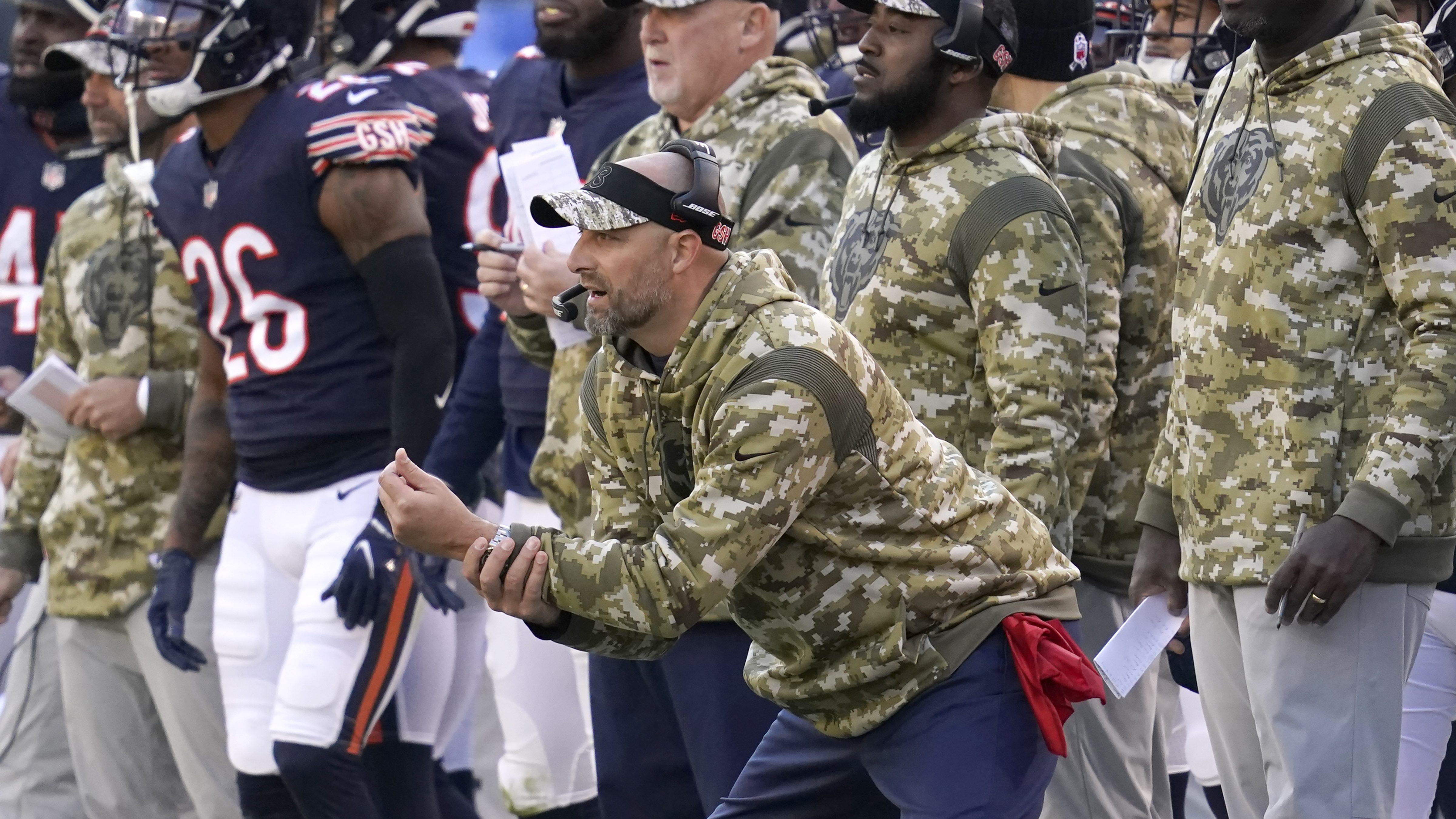 Chicago Bears head coach Matt Nagy watches his team from the sidelines during the second half of an NFL football game against the Baltimore Ravens Sunday, Nov. 21, 2021, in Chicago. (AP Photo/Nam Y. Huh)

Maybe the NFL teams set to play on Thanksgiving got caught looking ahead to the holiday extravaganza.

All six squads playing on Thursday lost in their lead-up to the Thanksgiving game, marking the first time since 2001 that every team playing on the holiday dropped its previous contest.

Back then there were only two Thanksgiving games, with Detroit hosting Green Bay and Dallas hosting Denver.

This year there are six teams — Detroit, Chicago, Las Vegas, Dallas, New Orleans and Buffalo — looking to get rid of the bad taste of a loss so they can enjoy their holiday. Four of those are on winless stretches of at least three games.

Detroit (0-9-1) hosts Chicago (3-7) in the first game, a matchup between a winless team and another on a five-game losing streak. The Bears and Lions are familiar Thanksgiving foes with this being their 19th meeting, two shy of the record held by Detroit and Green Bay.

That game will be followed by the slumping Raiders (5-5), who have lost three straight, visiting the Cowboys (7-3), who have dropped two of three.

The nightcap features another team on a three-game skid, with New Orleans (5-5) hosting Buffalo (6-4).

The final two games on Thanksgiving are part of a record nine this week between teams that don’t have a losing record, the most in NFL history in Week 12 or later.

The Arizona Cardinals have become the NFL’s road warriors.

The Cardinals have won all six road games this season, with each victory coming by at least 10 points. The last team to do that was the Cowboys in 1968 when they won all seven road games they played that season by double digits.

Arizona is off this week but can match the mark the following week at Chicago.

The Minnesota Vikings have had a knack for playing with the lead.

The Vikings are the 20th team in the Super Bowl era to lead each of their first 10 games by at least seven points. Despite having that kind of cushion each game, Minnesota is still only 5-5 on the season.

Minnesota can become the 17th team to do it in the first 11 games this week against San Francisco.

Jonathan Taylor and Austin Ekeler had days to remember on Sunday.

Taylor scored five touchdowns for the Colts, while Ekeler got into the end zone four times for the Chargers, marking the seventh time since 1950 that multiple players scored at least four TDs on the same day. The last time it happened was Nov. 18, 2007, when Randy Moss and Terrell Owens did it.

Ekeler was the ninth player in the Super Bowl era to have at least two TD catches and two TD runs in the same game. The most recent to do it before Ekeler was Maurice Jones-Drew for Jacksonville against Tampa Bay in 2011.