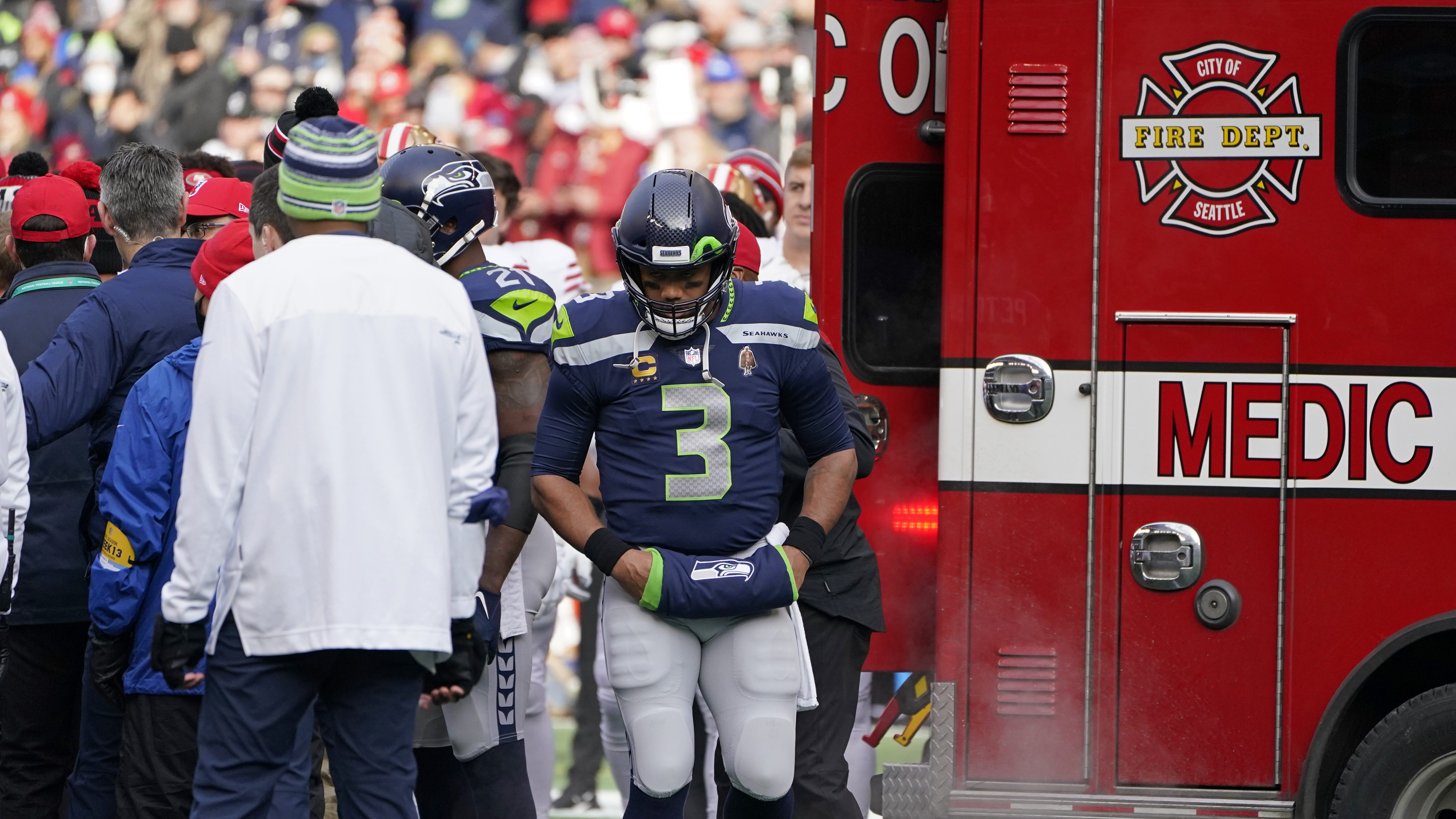 Seattle Seahawks quarterback Russell Wilson (3) stands near an ambulance before it took San Francisco 49ers running back Trenton Cannon off the field after an injury during the first half of an NFL football game at Lumen Field, Sunday, Dec. 5, 2021, in Seattle. (AP Photo/Elaine Thompson)

San Francisco 49ers backup running back Trenton Cannon was taken off the field in an ambulance after a scary collision on the opening kickoff in a 30-23 loss at Seattle on Sunday.

Cannon was attempting to make a tackle on DeeJay Dallas when his head hit the leg of a teammate. San Francisco’s training staff immediately ran onto the field and stabilized Cannon’s neck. He was eventually placed on a backboard, loaded onto a stretcher and into an ambulance that was brought onto the field.

The 49ers said Cannon had a concussion, was in stable condition at a Seattle area hospital, and would remain overnight for observation.

Cannon is in his fourth season out of Virginia State. He started the season with Baltimore before joining the 49ers and has primarily played on special teams.

Cincinnati Bengals quarterback Joe Burrow dislocated his pinky finger when he was sacked and fumbled on the Bengals’ first offensive series. He said it popped back into place on its own and didn’t affect this passing. Burrow was 24 for 40 for 300 yards in a 41-22 loss to the Los Angeles Chargers. He was sacked six times.

Trainers tried tape and gloves to stabilize the injury, but nothing worked. He finally just played with nothing protecting it.

“I can’t imagine it getting any worse,” he said. “If it doesn’t get worse, I’ll play next week.”

Chargers defensive lineman Joey Bosa left to be evaluated for a concussion in the first quarter. Coach Brandon Staley said Bosa did not have a concussion, but was held out the rest of the game anyway. Defensive lineman Justin Jones suffered a knee injury. The Bengals lost linebackers Markus Bailey (shoulder) and Logan Wilson (shoulder), and cornerback Chidobe Awuzie (right foot).

Chicago’s Andy Dalton, making his second straight start with Justin Fields sidelined because of broken ribs, matched a career high with four interceptions. He injured his left hand trying to make a tackle after getting picked off a second time. Dalton said he didn’t think it affected his throwing, though he will have it checked out this week. He was 26 of 41 for 229 yards and two touchdowns.

Minnesota wide receiver Adam Thielen, who entered Sunday tied for the NFL lead with 10 touchdown catches, sprained his left ankle on the opening drive in a 29-27 loss to previously winless Detroit and didn’t return. He had one catch for no yards prior to leaving.

Field judge Mike Weatherford left early in the fourth quarter of the Ravens-Steelers game after getting tangled up with Chase Claypool following a 40-yard gain.