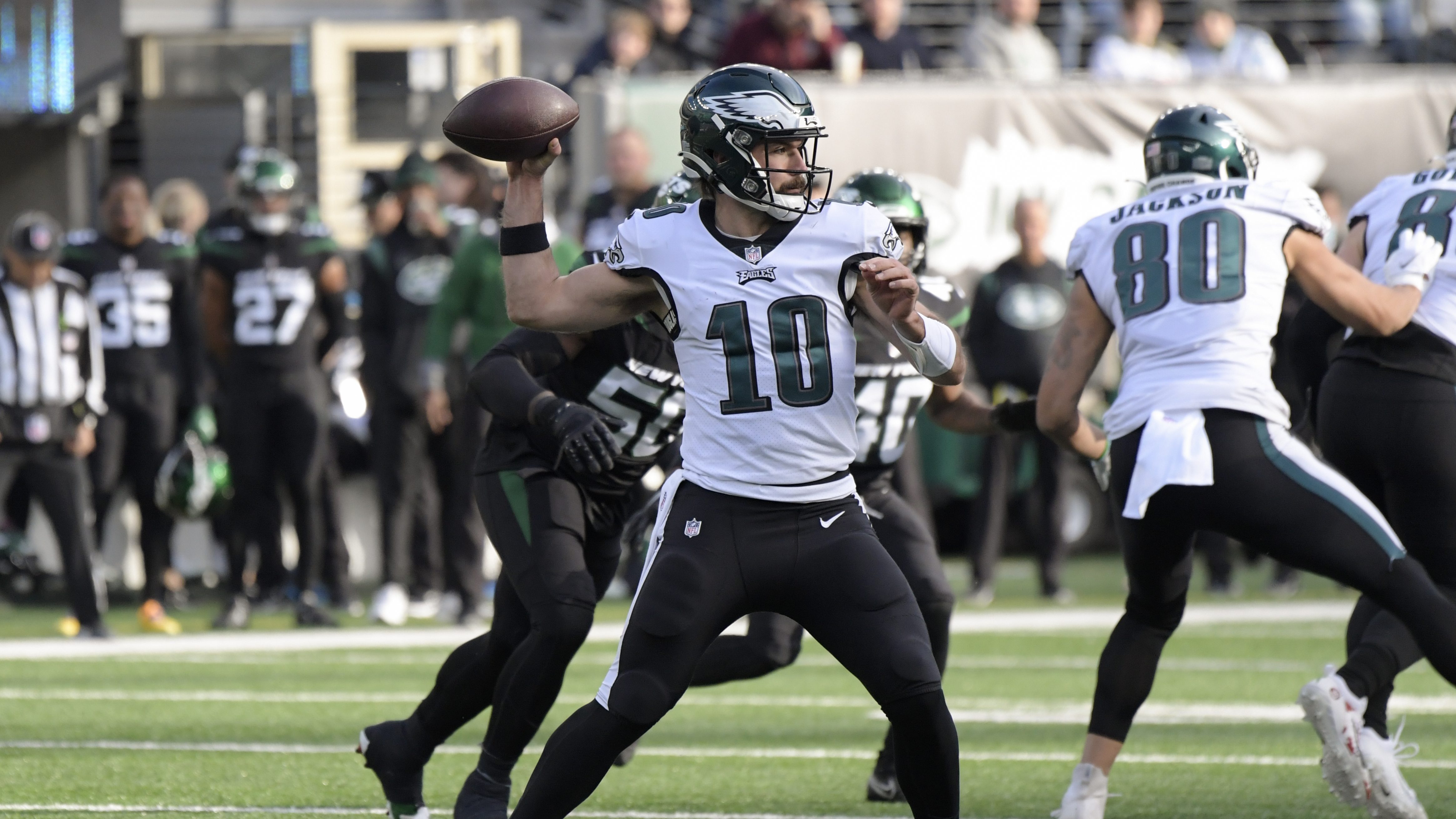 EAST RUTHERFORD, N.J. (AP) — Gardner Minshew started in place of an injured Jalen Hurts and led the clock-eating Philadelphia Eagles to scores on their first seven possessions in a 33-18 victory over the New York Jets on Sunday.

Minshew was 20 of 25 for 242 yards and two touchdowns to Dallas Goedert. Kenneth Gainwell ran for a score, Jake Elliott kicked four field goals and the Eagles (6-7) improved to 12-0 all-time against the Jets (3-9).

With Hurts out with an ankle injury, Philadelphia bounced back from a disappointing 13-7 loss to the Giants last weekend at MetLife Stadium to slice through the Jets’ defense drive after drive. The only possession on which the Eagles didn’t score was their last.

But the win might have come at a cost as running back Miles Sanders left in the fourth quarter with an ankle injury after running for 120 yards on 24 carries. Center Jason Kelce also limped off the field at the 2-minute warning.

Things slowed considerably after halftime as the Jets held the ball for only 70 seconds in the third quarter — just three plays for 3 yards. Meanwhile, the Eagles had 24 plays for 81 yards over 13:50 in the period. Philadelphia held the overall edge in time of possession: 35:36 to 24:24.

Four plays after Braxton Berrios returned the opening kickoff 79 yards, Zach Wilson found Elijah Moore in the back of the end zone for a touchdown. It was Wilson’s first TD pass since Week 4.

But Alex Kessman — signed Saturday from the practice squad to replace the struggling Matt Ammendola — missed the extra point in his NFL debut.

Minshew and the Eagles answered with a 36-yard TD to Goedert. And Elliott made his extra-point try to give the Eagles a 7-6 lead.

Wilson and the Jets came right back, with the rookie quarterback capping an 11-play drive with a 1-yard touchdown run. But Kessman was wide left again on the extra point, prompting boos from the Jets fans at MetLife Stadium.

Minshew then sliced right through New York’s defense again, connecting with a wide-open Goedert — again — for a 25-yard touchdown.

Again, Wilson marched down the field with the Jets, who went for it on fourth-and-1 from the 1 and got a touchdown toss to Ryan Griffin in the back of the end zone. The Jets went for 2 but Wilson’s throw to Jamison Crowder was incomplete.

The back-and-forth TD streak ended on the fourth possession by the Jets, who were forced to punt with just over two minutes left before halftime.

The Eagles didn’t get a touchdown on their fourth possession, either. But they still got points with Elliott’s 31-yard field goal.

Elliott added a 32-yarder on Philadelphia’s first drive of the third quarter, pushing the Eagles’ lead to 27-18.

Wilson finished 23 of 38 for 226 yards and the two scores. He was also intercepted by Marcus Epps in the fourth quarter — and the Eagles scored on their seventh straight drive with Elliott’s 46-yarder. … Goedert finished with six catches for 105 yards and two TDs.

The Jets thought they stopped the Eagles for the first time with 1:18 left in the third quarter when they stuffed Minshew on fourth-and-1. But Nick Sirianni challenged the call, and the play was overturned on video review — giving Minshew a 2-yard gain and Philadelphia a first down as Jets coach Robert Saleh voiced his displeasure on the sideline.

That came four plays after the Eagles went for it on fourth-and-3 from New York’s 47 and C.J. Mosley was called for encroachment — a penalty Saleh vehemently argued with officials.

Eagles: Have their bye-week break and then return home to take on NFC East-rival Washington on Dec. 19.

Jets: Stay at home next Sunday to host the New Orleans Saints.