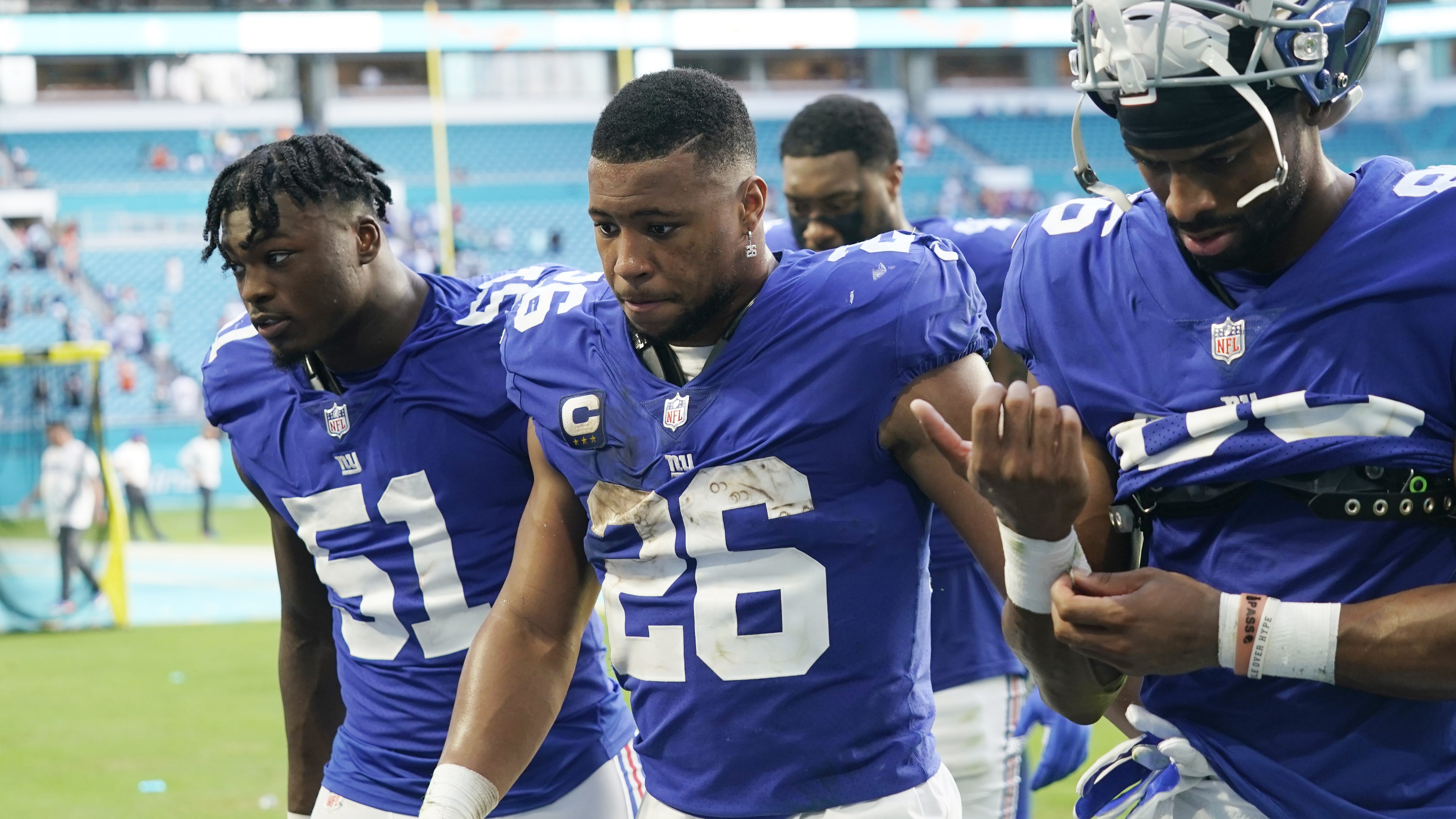 EAST RUTHERFORD, N.J. (AP) — As the losses mounted over the course of the season, the New York Giants could always look at the standings in the weak NFC and recognize they were a game or so out of a wild-card playoff berth.

It’s time to end the wishful thinking. The Giants (4-8) are going nowhere in 2021, other than probably back to the drawing board.

With their 20-9 loss to Miami, New York is on the verge of a fifth straight losing record, and fifth straight year out of the postseason. Not only did the Giants lose backup quarterback Mike Glennon — who was starting for the injured Daniel Jones (neck) and sustained a concussion — but New York might be forced to start inexperienced Jacob Fromm, the former Georgia star who was signed off the Bills’ practice squad last week.

The step forward Giants fans anticipated after a 6-10 first season under rookie coach Joe Judge has turned into a leap backward. Just watch the replay of Sunday’s loss, an awful performance.

Remember this sequence in the third quarter. With a first-and-10 at their 27, Glennon was sacked on consecutive plays, losing 20 yards. On third-and-30 from the New York 7, there was a delay-of-game call.

That coach Joe Judge said after the game he saw progress is baffling.

It seems a rebuild is once again on the horizon. General manager Dave Gettleman probably won’t be asked to oversee this one, and there are questions whether Judge is kept around if a new GM is hired.

And what should co-owner John Mara’s role should be? He has been the face of the franchise since his father, Wellington, died in October 2005. Over the past six years he has fired coach Tom Coughlin and hired, then fired Ben McAdoo and Pat Shurmur in hopes of returning the Giants to their glory days; they won Super Bowls in February 2008 and ’12. The only year New York has made the playoffs since then was 2016, and that resulted in a first-round exit as a wild card.

Certainly an option would be to give Judge one more year to either make a big jump or bring in someone else. The reality probably is that the Giants will hire a new general manager and it will be that person’s call.

Pat Graham’s defense. In five of the last six games, the Giants have given up 20 points or less, including two outings under 10. The only bad game was against Tom Brady and the Buccaneers in a 30-10 loss. Despite the stinginess, New York is 3-3 in those games.

It would be easy to say the entire offense. The truth is the Giants used the draft and free agency to bulk up the unit and it has failed miserably. Injuries decimated the offensive line and too many skilled player have been on and off the field with strained hamstrings and quads, and sprained ankles. It’s more than bad luck.

Tae Crowder. Since replacing the injured Blake Martinez at inside linebacker early in the season, Crowder has been outstanding. The last pick in the 2020 draft leads the team in tackles with 88. He had a team-high nine against the Dolphins and one of the three quarterback hits against Tua Tagovailoa. Additional points for rookie linebacker Azeez Ojulari for a sack, giving him a team-high 6 1/2.

Kenny Golladay. The Giants paid the veteran wide receiver $72 million in free agency despite his playing in only five games in 2020. After signing he said he was healthy. He has missed three games-plus because of a knee injury and was only on the field for 38 of 65 plays against the Dolphins because of a rib injury. For the season, he has 26 catches and no touchdowns. While his 409 yards receiving lead the team, that’s not worth megabucks.

Glennon sustained a concussion in the game and his status for Sunday is uncertain. With Jones’ status also uncertain, Fromm may get his first NFL regular-season action. Brian Lewerke of the practice squad would be his backup. Lewerke also hasn’t played in a real NFL game. Golladay’s ribs will be a concern this week. The Giants have to hope receivers Sterling Shepard (quad) and Kadarius Toney (oblique/quad) are ready to return. The Giants had two positive COVID-19 tests on Monday. Quarterbacks coach Jerry Schuplinski and guard Wes Martin were both positive. The team is waiting for a second test on each.

22 — The total number of points the Giants have scored in the last two games since Freddie Kitchens replaced Jason Garrett as the offensive play caller.