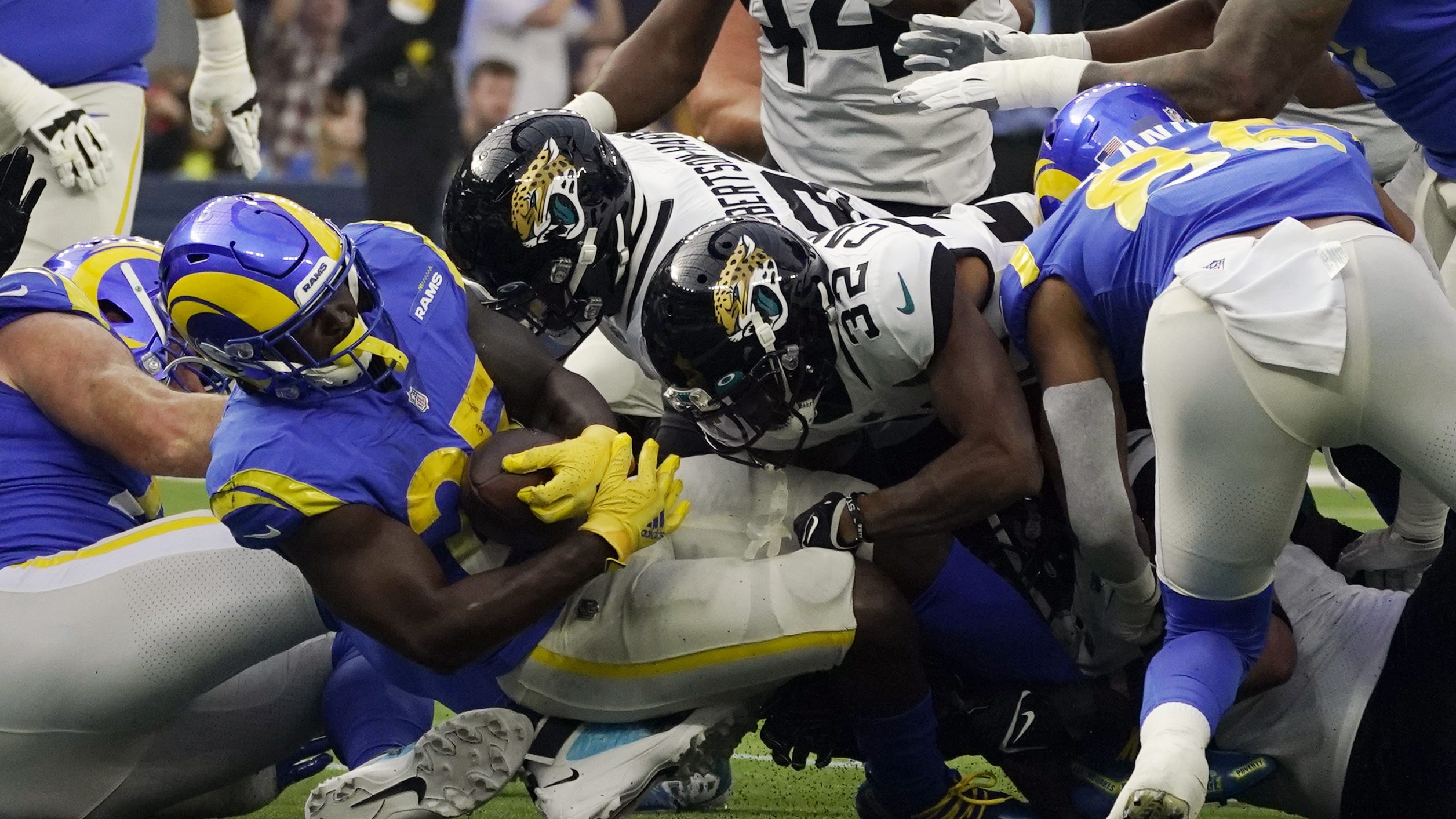 LOS ANGELES (AP) — After stumbling and struggling through a three-loss November, the Los Angeles Rams emerged from their rough month with the result they needed from a meeting with one of the NFL’s worst teams.

Yet it was the way that the Rams routed the Jacksonville Jaguars 37-7 that provides confidence they might get their season back on course.

The Rams (8-4) controlled both sides of the ball, as they should against a 2-10 opponent. But they started that dominance on their opening offensive series with something they hadn’t showed all year — a jumbo formation, using Joseph Noteboom as an extra lineman and running the ball straight at the Jags.

Throughout the afternoon at SoFi Stadium, the Rams used more personnel groupings, offensive sets and play-action passes than they’ve exhibited in just about any game this season. The overall game plan had similarities to Sean McVay’s run-first-and-play-action mentality from his first two seasons in Los Angeles, when Todd Gurley was a rampaging force and the Rams’ offense was the envy of the league.

The Rams had barely changed their offensive personnel packages at all this season, making fewer substitutions and running three-receiver sets on a greater percentage of their plays than any other NFL team. Robert Woods’ injury and a three-game losing streak essentially forced McVay to re-evaluate what he was doing, and he came out with a new plan that worked splendidly.

For a team with a head coach that has often exhibited supreme — and, frankly, justified — belief in his technical prowess, this unpredictability might boost the Rams and McVay to contention for the NFC West title behind Arizona (10-2), their opponent Monday night.

Kupp didn’t make his first catch until the first two-minute warning, but ended up with his seventh 100-yard receiving game (and his 11th 90-yard game) of the season. The wideout’s connection with Stafford remains the backbone of the Rams’ attack even with every opponent knowing what they want to do. Woods’ season-ending injury seriously damaged Los Angeles’ offense, but Kupp — no stranger to injury problems himself — remains unstoppable.

The Rams still rely on debatably talented players as pass-catchers and defensive backs. Tight end Kendall Blanton and rookie receiver Ben Skowronek both made costly drops, while Dont’e Deayon, Nick Scott and Darious Williams — not a fringe player, but a respected starting cornerback — all had rough moments in coverage. Star-studded Los Angeles’ depth problems loom as a critical flaw.

Michel produced the Rams’ first 100-yard rushing game of the season even against the Jaguars’ loaded box. An ability to gain yards after contact has been sorely missed by the Rams since Gurley’s departure, and McVay could see how much better his offense ran with Michel breaking tackles.

Darrell Henderson Jr. should lose playing time to Michel when he returns from his thigh injury. Henderson was technically available Sunday, but Michel’s excellence kept Henderson on the sideline. Henderson has been an adequate back when healthy in his three NFL seasons, but he has run for 100 yards just once, back in September 2020.

The severity of C Brian Allen’s knee injury is unclear, but Coleman Shelton filled in capably with minimal previous experience. The Rams’ offensive line deserves much of the credit for Michel’s success.

1 — Plays missed by Stafford after taking a brutal hit late in the second quarter. Stafford shrugged it off as “a little chest shot” and returned after backup John Wolford handed off on his only snap. His teammates were a bit more impressed with their latest example of Stafford’s famed toughness: “I thought he died there for a second, the way he was laying there,” Kupp said with a laugh. “It was like, ‘OK, his soul is gone.’”

The Rams probably need to win at Arizona to have any shot at the NFC West title, and they’ve beaten the Cardinals in eight of their past nine meetings. A victory would also prove Los Angeles is an actual Super Bowl contender, while a loss would keep the Rams firmly in the second tier.