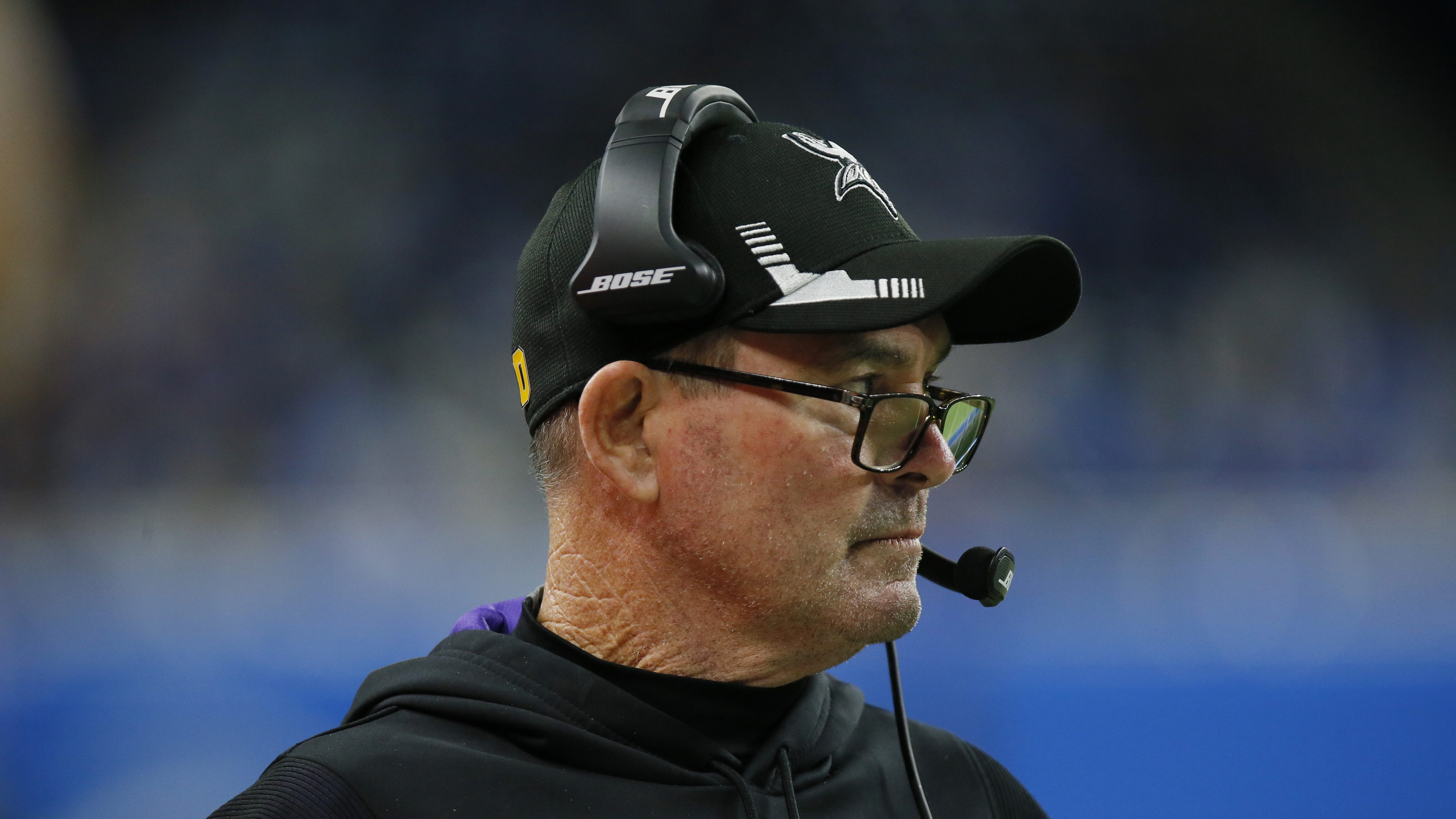 Minnesota Vikings head coach Mike Zimmer watches from the sideline during the second half of an NFL football game against the Detroit Lions, Sunday, Dec. 5, 2021, in Detroit. (AP Photo/Duane Burleson)

MINNEAPOLIS (AP) — The aggressive, clever and confident defense that became a hallmark of the Minnesota Vikings under coach Mike Zimmer has been mostly missing for two years, and this vanishing act was never more pronounced than the last drive in Detroit on Sunday.

Pass by pass, Jared Goff led the Lions on a methodical 75-yard march to their first victory of the year with a touchdown that ended the game.

The Vikings (5-7) were supposed to use the afternoon to rejuvenate their push for the postseason. By losing on yet another as-time-expired play, they’ve not only put the playoffs but the jobs of Zimmer and his staff in further jeopardy.

The 29-27 loss to the Lions had that look of a team that’s just not destined to be successful this year, no matter how many bad breaks they’ve endured.

“Obviously our backs are to the wall, but they’ve been back against the wall for a while,” said Zimmer, who has overseen a 13-19 stretch by the Vikings since Dec. 15, 2019.

The Vikings have allowed an average of 406 yards over the past six weeks, the worst mark in the NFL during that span.

Even without linebackers Anthony Barr and Eric Kendricks, cornerback Patrick Peterson and defensive ends Danielle Hunter and Everson Griffen, the way the Vikings let Goff advance without any timeouts was inexcusable. The Lions had failed to convert all eight third downs prior to the final possession.

Goff went 9 of 12 on the winning drive, excluding two clock-killing spikes, with no gain longer than 11 yards. Only once did Zimmer send an extra rusher, when a blitz by safety Harrison Smith pressured Goff into a near-interception in the end zone by Bashaud Breeland. Mackensie Alexander nearly picked off a pass, too.

On the last five snaps, the Vikings only had three down linemen. That left eight defenders in coverage for the four receivers in pattern on the last play. Cameron Dantzler passively backpedaled halfway into the end zone as Amon-Ra St. Brown ran a simple hook route in front of him, and safety Xavier Woods was too late to arrive with help as the ball landed in the rookie’s arms for the win.

“We weren’t covering that great,” Zimmer said, when asked about the lack of pressure dialed up on the final drive. “Everything’s hindsight I guess.”

Even after Adam Thielen was injured on the sixth play of the game, Kirk Cousins kept up his rhythm with superstar Justin Jefferson for 11 receptions, 182 yards and the go-ahead touchdown with 1:50 left. Tyler Conklin and K.J. Osborn stepped up, too. Cousins has thrown for 1,213 yards and nine touchdowns with one interception in the past four games.

The downfield passing attack is this team’s greatest strength. Lately, it’s only been held back by conservative play-calling or decision-making.

The offense was not without fault, with the first six possessions resulting in two punts, one lost fumble, one turnover on downs and two field goals after stalled drives reached the 19 and the 9.

“We just seemed methodical and lethargic in the first half,” Zimmer said.

The Vikings failed on all three of their 2-point conversion attempts and are just 1 for 7 this season. They were 8 for 12 last year. The first two 2-point play calls on Sunday left plenty of room to question offensive coordinator Klint Kubiak.

Kene Nwangwu took the handoff on the first one after a fake jet sweep to Osborn and was stonewalled after making his cut, off right tackle. With six linemen, two tight ends and a fullback in the formation for the second one, Alexander Mattison ran a simple dive to the right that went nowhere.

Greg Joseph has missed three extra points this year, but had Zimmer settled for a kick each time, assuming a make, the Vikings would’ve likely gone to overtime instead of losing on the last play.

Blake Lynch played every snap in Barr’s strong side linebacker spot and produced his first two NFL sacks. The second one forced a fourth-down fumble by Goff that Lynch, who was undrafted last year out of Baylor, recovered.

Oli Udoh started at left tackle, ahead of veteran Rashod Hill, with Christian Darrisaw sidelined. Garrett Bradbury regained the starting center spot that Mason Cole handled the past four games, and Cole took Udoh’s place at right guard. Udoh had two false start penalties and has the most flags (14) of any player in the league. Eleven have been accepted, for a total of 94 yards against the Vikings.

The Vikings have allowed 101 points after halftime over their past six games. Only the Las Vegas Raiders (89 points, five games) have been scored on at a worse rate over that span.

The Vikings only held a walk-through on Monday. Five players were held out: Thielen (ankle), Darrisaw (ankle), RB Dalvin Cook (shoulder), Lynch (hip) and backup safety Cam Bynum (ankle). Barr (hamstring/knee) and Kendricks (bicep) were listed as limited participants. Zimmer said he anticipated having “quite a few” defensive players back on the field on Thursday.

With Washington (6-6) and San Francisco (6-6) currently holding the last two NFC wild-card spots, the Vikings are in tiebreaker trouble. Washington (5-2) has a superior record in NFC games than Minnesota (4-4), and San Francisco has the head-to-head victory on Nov. 28. Four other seven-loss teams — Philadelphia, Carolina, Atlanta and New Orleans — are crowding the Vikings, too.

Winning four of the last five games would probably get them in the postseason, but even winning out wouldn’t guarantee entry. At this point, a top-10 draft pick appears more likely than the playoffs.