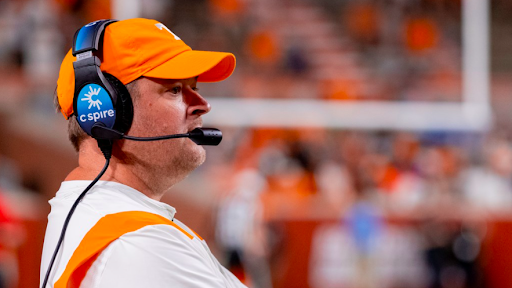 KNOXVILLE, Tenn. (BVM) − Josh Heupel may not have been the massive hire that Tennessee football fans were looking for, however, he has proven that he belongs on Rocky Top and it is only his first season!

Heupel inherited a decimated program, to put it nicely. After the firing of former head coach Jeremy Pruitt, the transfer portal received a lot of action from players within the Tennessee program. Ten players left the program for the transfer portal within the first few weeks of the Heupel hire and, prior to the spring camp, the Vols had less than 70 scholarship athletes on the roster and roughly 13 high school signees left according to on3.com.

The Tennessee football program has been through the wringer when it comes to coaches over the last few years. From the one year of Lane Kiffin to the ultimately failed attempt at a head coaching gig for Jeremy Pruitt, it seems like Tennessee might have found their guy. It has only been one season with Heupel at the helm, however, he got a decimated Tennessee team to a seven-win season after winning three games all last season. The win total is not the only aspect that has changed under the new Heupel regime.

By the numbers this new style offense that Heupel is running is substantially better than the offensive scheme that was run under the previous coaching staff. Throughout the season this new fangled Tennessee offense bolstered a 38.8 points per game average whereas their opponents averaged 27.5 points per game, a complete 180 from last season where the Vols averaged just over 21 points per game. This season, Tennessee outscored opponents 466-330, even though they went 7-5.

Josh Heupel has brought the energy back to Vol Nation with his high tempo offense. Last season Vol football games were boring to watch and slow paced with not a lot of scoring. As a team the Vols offense, in the passing game, had a 64.97 completion percentage and threw for 2,964 yards. The offensive scheme that Heupel brought in was fast—crazy fast. At one point in the season, the Vols were the fastest offense in the country, running a little over three plays every minute. This made the scoring for the Vols quick, and to a degree wore the opponents’ defense out. Take a look at the Ole Miss game in October; the Volunteers were moving so fast that the Ole Miss players were dropping like flies after what seemed to be every play. That is the Heupel effect.

A true quarterback in every sense of the word, Heupel has produced some good collegiate QBs in his coaching tenure. After winning a National Championship as the quarterback at Oklahoma, he jumped right into a graduate assistant role with Oklahoma before becoming their quarterback coach in 2006. He was upgraded to offensive coordinator before being let go in 2014. One big thing to look at is his overall record at UCF where he went 28-8 in three seasons, one of which culminated in an American Athletic Conference championship after an undefeated season.

Vol Nation and the football program are both looking to Heupel to produce similar numbers at the University of Tennessee and are all looking forward to a potential SEC championship under the Heupel regime in the coming years and maybe even more. At this point in time for Vol fans, it is time to “believe the Heup” and get on board with what Heupel is doing at UT because he has shown that he can produce with practically nothing, roster wise, and still win games. Once he gets his recruits in, things may be finally starting to look up for this football program.