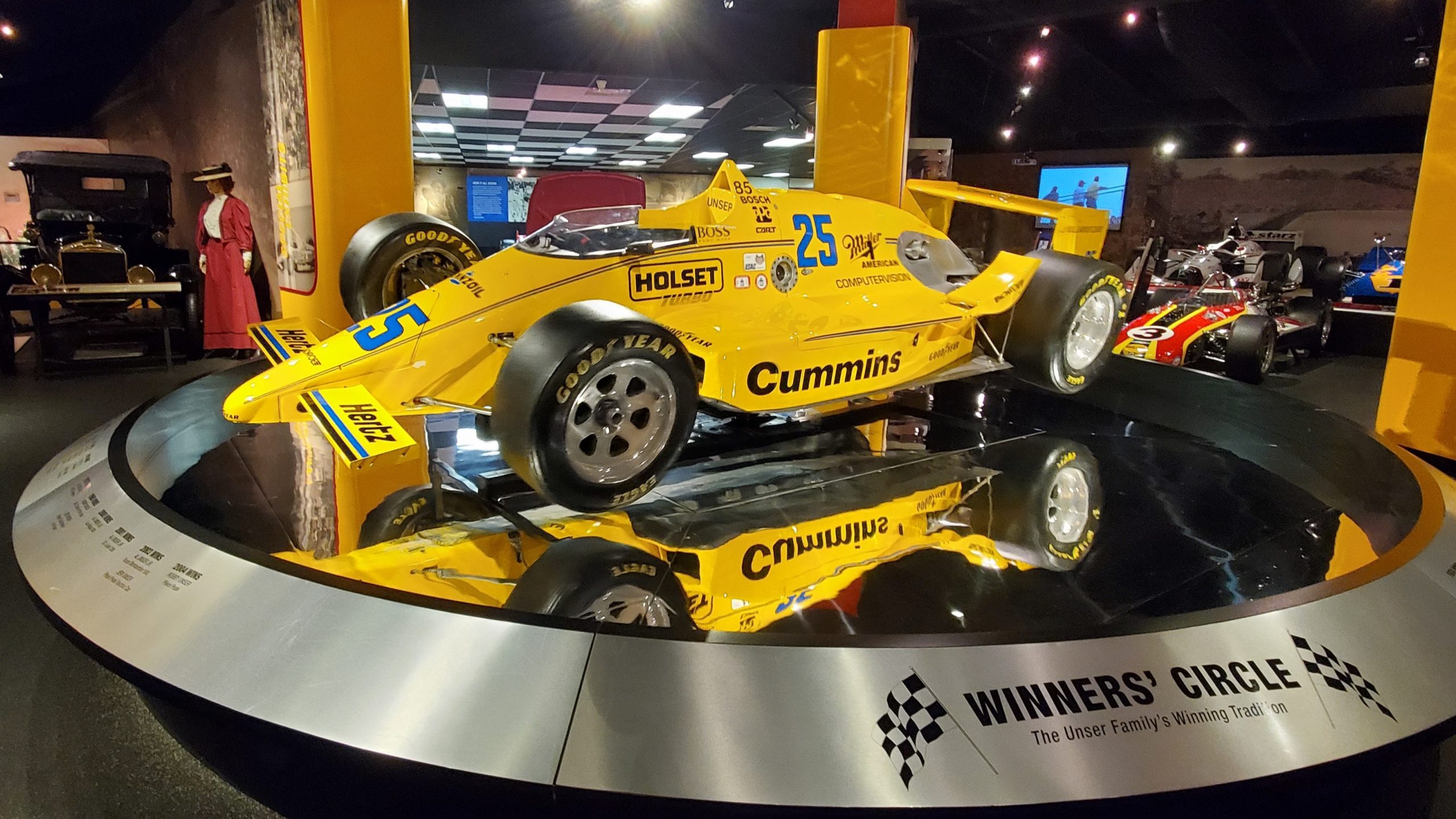 ALBUQUERQUE, N.M. — Albuquerque’s own Unser family is world-famous for the sport of auto racing. The nine combined Indianapolis 500 wins by Al Unser, his brother Bobby, and son Al Jr. make this legendary family known to most everyone. Here’s an overview of the family history and the museum, followed by a Q&A with Al, Susan, his wife, and Tom MacDuffie, a 14-year volunteer at the Unser Racing Museum and its lead docent.

Louis and Marie Unser, the patriarch and matriarch of the family, moved from Switzerland to Colorado Springs, CO, and lived near the foot of Pike’s Peak. Louis had a keen interest in exploring the then-new automobile engines. That gene stayed in his family for generations. His three sons — Louis Jr., Joe, and Jerry Sr. — made it to the top of Pike’s Peak in a motorcycle and sidecar before there was even a road there. They became regular competitors in the annual Pike’s Peak Hill Climb race with Louis Jr. winning nine times.

Creating the museum was Al’s vision. Visitors are invited to learn about the family history, the sport of auto racing, and are able to see some magnificent race cars up close. I recommend getting a preview from the museum’s website before your visit. There, you will also find the moving tribute to Bobby Unser who sadly passed away on May 2, 2021.

To gather information for this article, I visited the museum for an in-depth tour from Tom MacDuffie. I also had a telephone interview with Al and Susan shortly prior to Al’s sad passing on Dec. 9, 2021.

Building the Unser Racing Museum in Albuquerque suggests a special connection with our city. Can you please share how the family feels about Albuquerque?

Susan Unser: It’s always been Al and Bobby’s home. In racing, they were known as the “Unsers from Albuquerque.”  They enjoyed that. Albuquerque’s been good to us. As a way to honor the Unser Family, the State of New Mexico Legislature, under Governor Bill Richardson, was instrumental in funding the building of the Museum, which has operated for 17 years as a non-profit 501(c)3 corporation. It’s one of the first public/private partnerships in the state.

When did the museum originally open? What was the reason behind building it?

Tom MacDuffie: It opened in September of 2005. The reason behind having a museum was to share their passion for racing – Indy racing in particular, and to create something that would perpetuate the knowledge of Indy racing, especially with children.

Al Unser: It’s really a neat thing to go in there and be reminded of all the memories. I still get the chills.

Susan, were you already a racing fan when you met Al?

Susan: We’ve been married for 18 years and together for 25. When we built the museum, car racing was all new to me. It was quite a learning curve.

Was most of the museum collection owned by family members?

Tom: Most of the collection was originally owned by Al Unser Sr. and Jr. and now is the property of the Foundation.

Al: It took Susan and me a very long time to gather up everything there.

What was the most generous donation given to the museum?

Tom: I believe the most generous donation is probably the 1962 Novi, rookie car of Bobby Unser in 1963. It was donated to the foundation by the Granatelli Family.

Susan, in addition to cars and racing, what were some other interests of Al and his brothers?

Susan: They loved snowmobiles and dirt bike racing. They liked being outdoors and they had a passion for just about anything that had an engine and required gas.

Tom, the museum gets high ratings on social media sites. Do people have to be knowledgeable about auto racing to enjoy the museum? What’s your favorite feedback from visitors?

Tom: No, definitely not. Guests who are not avid race fans seem to really enjoy all of the family history of the Unsers. Secondary to them is the realization of the amazing accomplishments of the Unser family in their endeavors. My favorite feedback from our guests is “WOW!” and hearing the amazement of how far the museum went beyond their expectations. Local Albuquerque people often say, “I drive by here all the time and never expected it to be this great.”

Al and Susan, how do you hope the Unser Family will be remembered?

Al: I hope we’re remembered for what we’ve accomplished in the sport of racing.

Al & Susan: And, hopefully, for bringing some recognition to Albuquerque and the State of New Mexico.