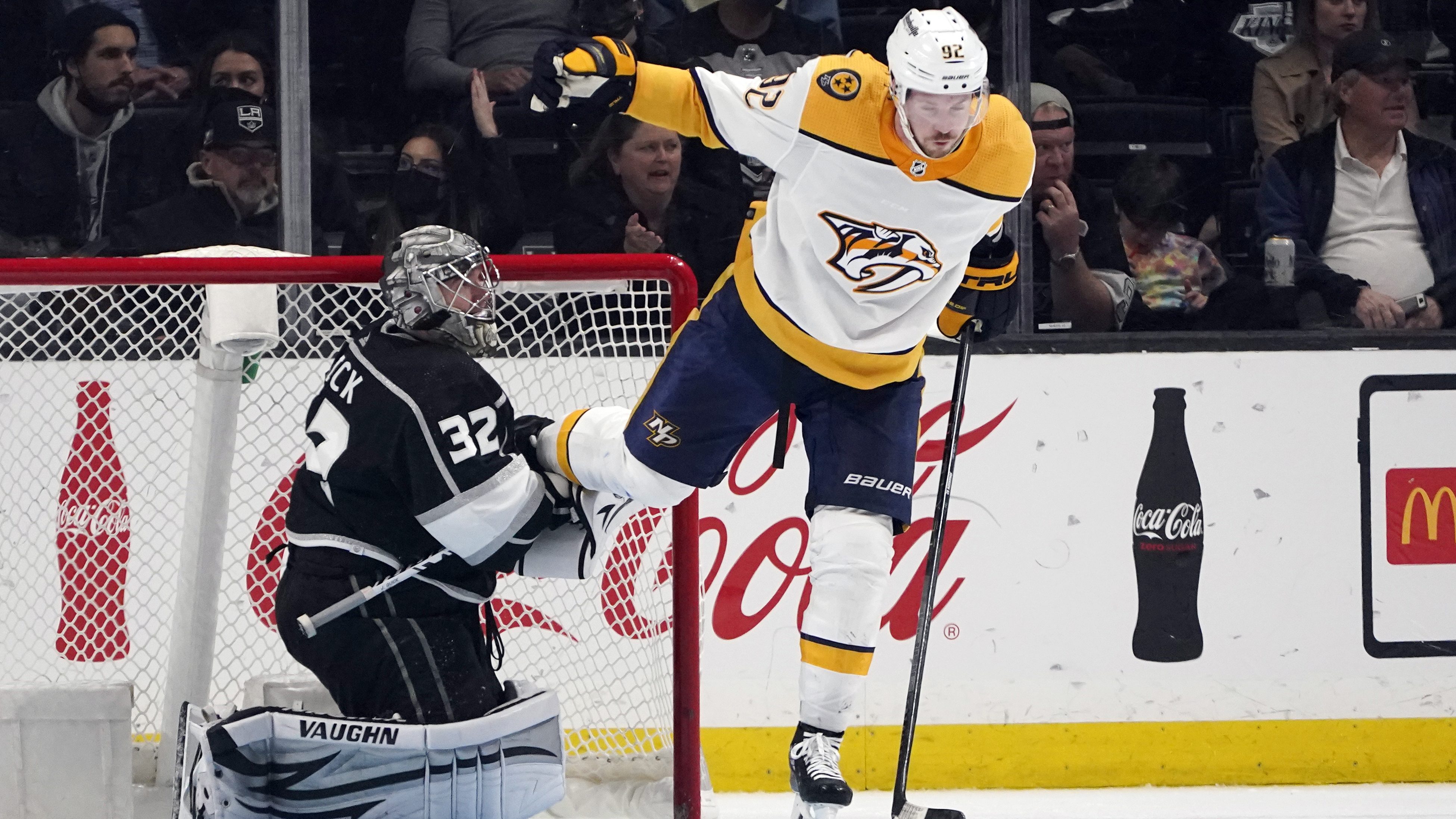 LOS ANGELES (AP) — The streaking Nashville Predators have vaulted to the top of the Central Division thanks to timely special teams and steady performances from left wing Filip Forsberg and goaltender Juuse Saros.

All three came through again Thursday night as the Predators extended their winning streak to three games with a 4-2 victory over the Los Angeles Kings.

Forsberg had a goal and an assist for his third straight multi-point outing, while Saros made a season-high 46 saves. Nashville’s power-play unit also came up big with two goals in the first period.

“We found a way. Our special teams were big factors and we got good goaltending,” coach John Hynes said. “You have to find different ways to win and we were able to do that.”

Saros’ 46 saves tied for the fourth-most of his career, and it marked the second straight game he was under heavy pressure. He stopped 41 shots in Tuesday’s 3-2 win over Vegas.

“I like when there’s a lot of action. I just kind of go with the flow in those games,” Saros said. “I think everyone kind of knows what we need to do to be successful. It is good when everyone is chipping in and we are keeping our foot on the gas.”

Dustin Brown and Martin Frk scored for Los Angeles, which lost despite having a 48-20 advantage in shots on goal. Jonathan Quick made 16 saves.

The Predators have the sixth-ranked power play in the league at 25.8% and have scored nine goals with the man advantage in their last seven games.

Forsberg scored from the right circle at 3:49 of the first for his third power-play goal of the season. Duchene extended the lead with 59 seconds left in the period when he made a nice move past Kings center Rasmus Kupari and put a shot under Quick’s leg pads.

It was Duchene’s 14th of the season, but first since Nov. 27 against Colorado.

Luff, who played three seasons for the Kings, scored his first goal of the year at 2:49 of the second period when he knocked in his own rebound after Quick made a pad save on his initial shot.

“I had a tough couple years there and to get one is huge,” Luff said.

Brown, playing his first game since Dec. 19, got the Kings on the board 9:37 into the second on a breakaway after Nashville’s Alexandre Carrier whiffed on a shot in the LA zone.

Frk made it 3-2 with a power-play goal at 10:33 of the third. The right wing was making his NHL season debut after ranking second in the American Hockey League in goals and assists.

Trenin put it out of reach for Nashville on an empty-net goal with 1:11 remaining.

Nashville improved to 14-2-6 and has won nine of its last 10 against Los Angeles. The Predators are 7-1-3 in their last 11 visits to crypto.com Arena.

Brown’s goal was the 321st of his career, passing Bobby Carpenter for 20th place among American-born players. Brown also played in his 1,263rd NHL game, tying Bill Guerin for eighth among U.S. players.

The Kings got their second penalty shot in the past three games, but Adrian Kempe couldn’t put it in the net. Saros made a nice stop with his blocker to keep Nashville’s lead at three goals 5:06 into the second period.

Counting Quick’s stop of Cam Atkinson last Saturday against Philadelphia, it was the third straight Kings game that featured a penalty shot. The last team to match that was Montreal in April 2009.

Predators: Wrap up their road trip against the Arizona Coyotes on Sunday.