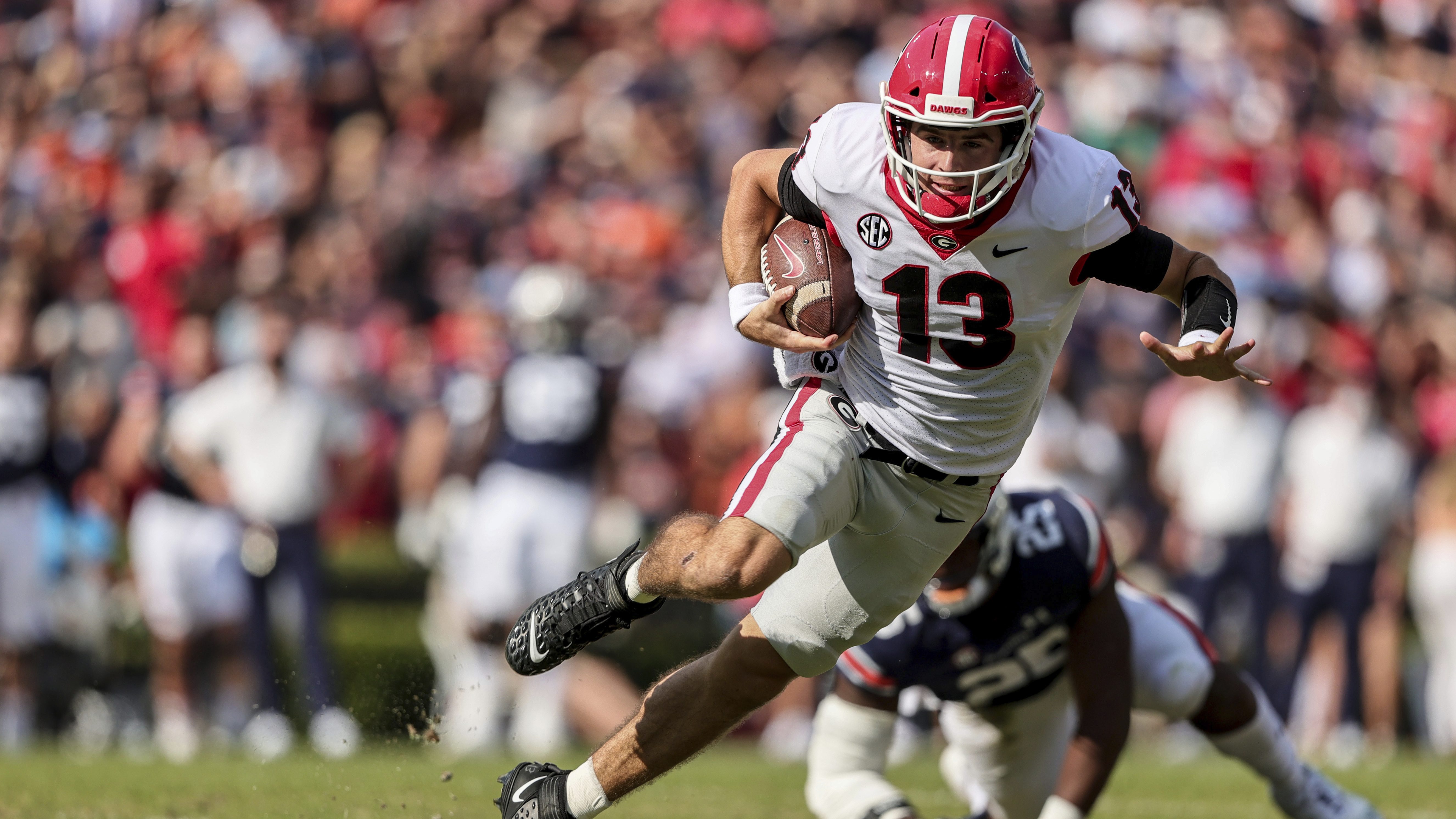 Determined to block out any distractions, Bennett purchased a flip device this past summer.

“I had a bunch of school coming up the next semester, I had football, I was like, I spend, whatever, an hour on my smartphone a day doing what?” he said Saturday. “Doing nothing, nothing that’s going to help me. I don’t even remember what I did.”

So, he flipped out.

“They actually still sell them at Verizon stores,” Bennett revealed. “Apparently a lot of old people still use them.”

Bennett found that it served his purpose, too. He’s certainly got no complaints after surprisingly claiming the starting quarterback job and leading the Bulldogs to Monday night’s national championship game against Alabama.

“I’ve got all this stuff to do, all this important stuff,” he said. “Let’s try not to let anything get in the way of that focus.”

Bennett uses his laptop and tablet to check email, which has worked out just fine.

There is one drawback, however.

“I have to carry a notepad to write down stuff because I used my Notes app a lot back in the day,” Bennett said.

He’ll probably go back to a more youthful device once the season is over.

“I’m not going to be some nomad,” Bennett quipped.

Not everyone in Georgia will be pulling for the Bulldogs.

Alabama linebacker Will Anderson has plenty of fans in his suburban Atlanta hometown of Hampton.

Dutchtown High School, where Hampton played, has declared Monday as “Will Anderson Day.”

“I just want to say thank you so much for the support and love you’ve shown me over the season,” Anderson said. “I couldn’t have asked for a better support system back at home.”

Georgia All-American Jordan Davis left a message in his locker for the next guy who tries to fill his massive shoes.

“I can’t reveal all the details,” he said. “It was just my name, a little message and the years I played and in a hiding spot so they have to find it. But when they do, they’ll have a little message.”

At the end of the final practice in Athens, the underclassmen had to carry the seniors off the field.

“It had to be like three or four people,” he said. “It’s like two people grabbed my legs, one got my back.”

As good as he is on the football field, Georgia linebacker Nakobe Dean might be even better in the classroom.

The engineering major is a 4.0 student, making his last B in middle school.

Dean was blunt when asked how he balances athletics with academics.

“Well, it’s hard,” he said. “It’s been a lot of long nights. A lot of times where I don’t get that much sleep. But you have to try to find your balance.”

But Dean believes those lessons will serve him well in life.

“That’s life. That’s growing up. That’s maturing,” he said. “And I feel like the things that I tackled in college from a time-management standpoint and just a real-world standpoint, leaving home and everything has prepared me on and off the field greatly, has matured me into the young man I am today.”

Jordan Battle is grateful for another chance to play in the national championship game.

This time, he wants to play all four quarters.

The Alabama safety was ejected from last year’s title game in the second quarter after being flagged for targeting for a hit on Ohio State tight end Jeremy Ruckert.

The loss of Battle didn’t hurt the Crimson Tide, which romped to a 52-24 victory.

But it still pained Battle to miss out on the second half.

It came from watching an episode of HBO’s “Hard Knocks” series featuring the Indianapolis Colts as they prepped to face Arizona’s elusive quarterback Kyler Murray.

“They were talking about the gingerbread man and how Kyler Murray was running around like a gingerbread man,” Georgia lineman Jordan Davis said. “That’s what we’ve been calling (Young) all week. Just seeing him run around our defense in the SEC championship game, you have to tighten up.”

Young had not heard of his new nickname until Saturday.

“I guess it’s a compliment,” he said.

Young threw three touchdown passes and ran for another score in a 41-24 victory over Georgia on Dec. 4.