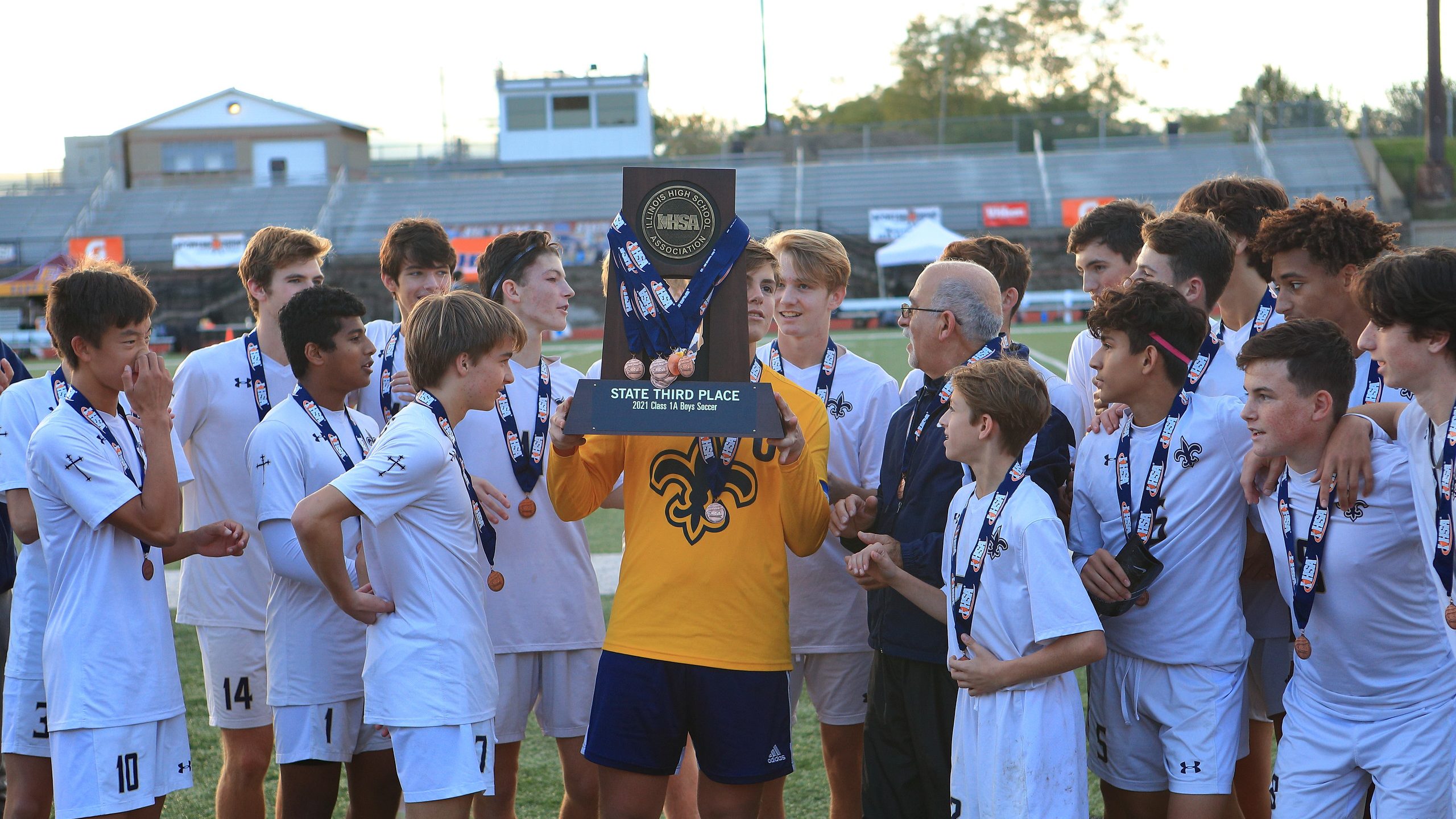 BLOOMINGTON, Ill. — Reza Ghasemi serves as Head Coach for both the boys’ and girls’ soccer programs at Central Catholic. The boys’ team had particular success this year after a 3rd place finish at State. While this was a monumental win for the Saints, with over 30 years of experience, this was not Coach Ghasemi’s first time at a State tournament.

“I coached the girls’ team at Normal West from 2002-2007 and took them to State. I then went to New York for work and coached there for two years before coming back to town in 2014 and becoming Assistant Coach at Wesleyan for the women’s team. We went to the Final Four together.” He made the switch to Central Catholic in 2015 and has been coaching there since, including this year’s trip to State with the boys and Sectional finals with the girls three times. He’s still holding out hope: “The girls’ program is strong and we will get there in due time.”

After decades of honing his approach, Ghasemi believes that hard work, setting goals, and belief are the keys to success when it comes to training. He encourages his players: “You’re good enough and if you believe we can go to State, we can go to State.” This year’s boys’ team was “very young, very talented, worked very hard, and was really a great group. We had two seniors—a starter and a great kid who played his role as a supporting member. The whole team were sponges and definitely wanted to learn and work hard to get better,” shares Ghasemi.

This year’s team wrote history. According to Ghasemi, “They were the first CCHS soccer team to win 25 games and the first to go to State.” Ghasemi also offers a special shoutout to the school administration, Athletic Director, and parents who supported the team all season long. “They say it takes a village and that was so true. Everyone has helped make this a great journey and a great success. I’m proud of my boys and I’m already looking forward to next year. We’re going to work hard over the summer and be ready for next season,” shares Ghasemi.

The winning team’s starting lineup included one senior, six sophomores, and four juniors. With all but one starter returning, Ghasemi feels the Saints program will have continued success over next few years. But with higher expectations comes added pressure. “Other teams now see us as a target and will be coming after us, so getting back to State will be even tougher. Still, on paper we look good, and we should go to State again and hopefully win it this time. The future is bright.” As a coach, Ghasemi views his role as keeping his team motivated and determined so that they’re prepared to execute and make it back to State.

Taking the boys to State this year and seeing the kids so excited was among Ghasemi’s proudest coaching moments. Another was in 2017 when he was selected as one of the Top 50 coaches in the country out of more than 1000 candidates.

While State championships are the ultimate goal, one of Ghasemi’s most memorable games was a super-sectional pairing against Mendota. Mendota was undefeated with a 24-0 record and they “practically shut down their whole town” so that fans could attend to cheer them on. With more than 1000 fans packed into the stands, the close game left double OT tied 2-2. Next came a penalty kick shoot-out, where each team selects five players to face off one-on-one against the other team’s goalie. Saints Goalie Austin Cook blocked two goals to clinch the win.

Ghasemi has been inspired by a classic German defender, Franz Beckenbauer. He remembers, “I loved his game. When I was a kid, he was my soccer idol. I admired his skill and hard work.” And that passion for the game of soccer is part of the legacy he hopes to leave with his own players: “I love them and they all love me. It’s true and it’s a great mutual feeling between everyone. I give it my all to help each player be successful in their own way.”