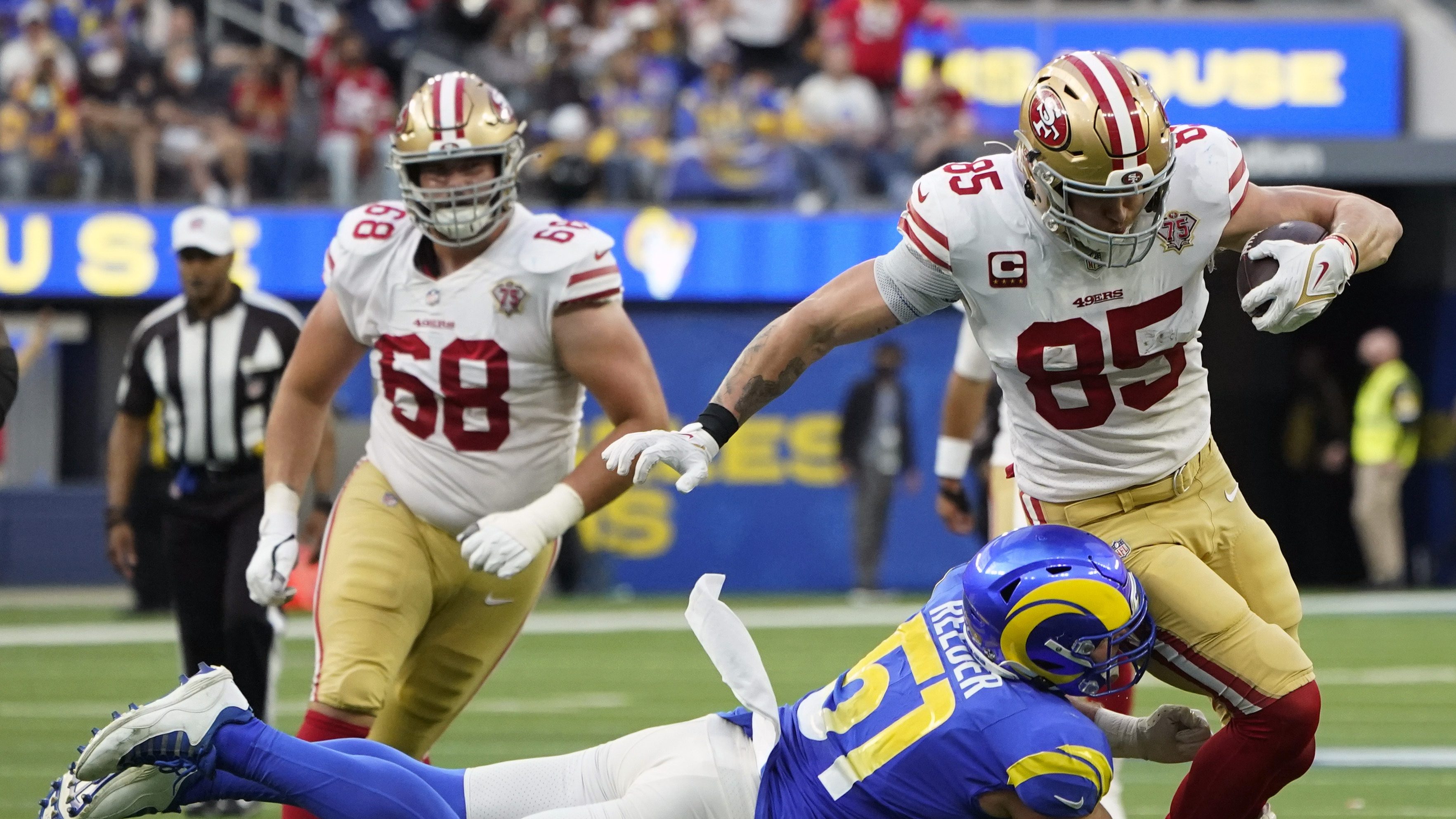 INGLEWOOD, Calif. (AP) — When the Los Angeles took an early 17-0 lead on the San Francisco 49ers, George Kittle had several Rams chirping their excitement in his ear about a shift in this one-sided rivalry.

No matter what jams the Niners got into this season, they were resourceful enough to get their season back on a playoff path. And once again, their winning route went right over the Rams.

The 49ers clinched a postseason berth with a 27-24 overtime victory over the NFC West champion Rams on Sunday, thanks to Robbie Gould’s 24-yard field goal with 2:45 left in overtime and a game-ending interception by rookie Ambry Thomas.

“Getting off to a slow start and then coming back like we did, it took everything,” said quarterback Jimmy Garoppolo, who passed for 316 yards. “We say that a lot of weeks, but this one really did. I felt it after the game. I know a lot of guys in that locker room did. It was worth it, though. It was one of those games you won’t forget any time soon.”

Jauan Jennings caught a 14-yard touchdown pass from Garoppolo with 26 seconds left in regulation for the 49ers (10-7), who are playoff-bound for only the second time in eight years after beating the Rams for the sixth consecutive time.

San Francisco roared to a 7-2 finish to the regular season bookended by two wins over the Rams (12-5). LA won an anticlimactic division title anyway, thanks to Seattle’s simultaneous victory over Arizona.

Sixth-seeded San Francisco will play at Dallas next Sunday afternoon, while the fourth-seeded Rams will host the Cardinals in the first playoff game in SoFi Stadium history next Monday night.

“Our guys are so resilient,” 49ers coach Kyle Shanahan said. “I’m very proud of them, and I’m just glad that we get to go into the tournament and be a part of it.”

Deebo Samuel rushed for a touchdown and threw a scoring pass to Jennings in regulation for the Niners, who made a deliberate 69-yard drive to open overtime. The Rams got the ball back, but Thomas made his first career interception on Matthew Stafford’s long throw down the Rams’ sideline.

San Francisco celebrated wildly on the field after extending its longest winning streak in this California rivalry since the 1990s. The Niners also won after falling behind by 17 points for the first time since the 2012 NFC championship game.

Cooper Kupp caught a go-ahead TD pass from Stafford with 2:26 to play for the Rams, whose five-game winning streak ended. The loss cost Los Angeles the No. 2 NFC seed and the strong chance to host at least two playoff games.

“This is a tough feeling,” coach Sean McVay said. “Our guys did a good job being able to navigate through the season. To be able to still win the division is a good accomplishment, but I don’t know that right now is the time to celebrate that.”

Stafford passed for 238 yards and three touchdowns while winning the first division title of his 13-year NFL career, but Los Angeles is headed into the postseason on a down note.

“There are some plays out there I want back,” Stafford said. “I guess (a division title) is nice. It means you get a home playoff game. But we would have rather won the game, for sure.”

The Rams went ahead 24-17 on Kupp’s 4-yard TD catch, and the teams traded punts before Garoppolo led the Niners on an 88-yard drive in 61 seconds, capped by Jennings’ score over the middle. San Francisco won the toss and capitalized.

Garoppolo played solidly through an injured right thumb and improved to 6-0 in his career against Los Angeles, but Samuel made the most impressive throw of the day when he hit Jennings with a wobbly 24-yard TD pass over the baffled Rams defense for the tying score late in the third quarter.

Jalen Ramsey kept the Rams in the game with a diving interception of a tipped ball in the end zone with 7:42 to play when San Francisco was in range for a go-ahead field goal.

Kupp became the fourth player in NFL history to lead the league in receptions, yards receiving and TD catches this season after finishing with seven catches for 118 yards. He made two huge catches on the Rams’ go-ahead drive, but didn’t get another touch.

Cam Akers ran the ball five times and caught three passes in his season debut for Los Angeles. The second-year pro tore his Achilles tendon shortly before training camp, but made an exceptionally quick recovery.

McVay won his third division crown, but also lost when leading at halftime for the first time after a 45-0 start to his career with the Rams. Los Angeles’ winning streak with a halftime lead was the second-longest in NFL history, trailing only a 49-game run by Green Bay in the 1930s.

Niners punter Mitch Wishnowsky was sidelined in the first half by a concussion, forcing Gould to punt and fullback Kyle Juszczyk to hold for kicks. Safety Talanoa Hufanga went out in the first half with a knee injury.