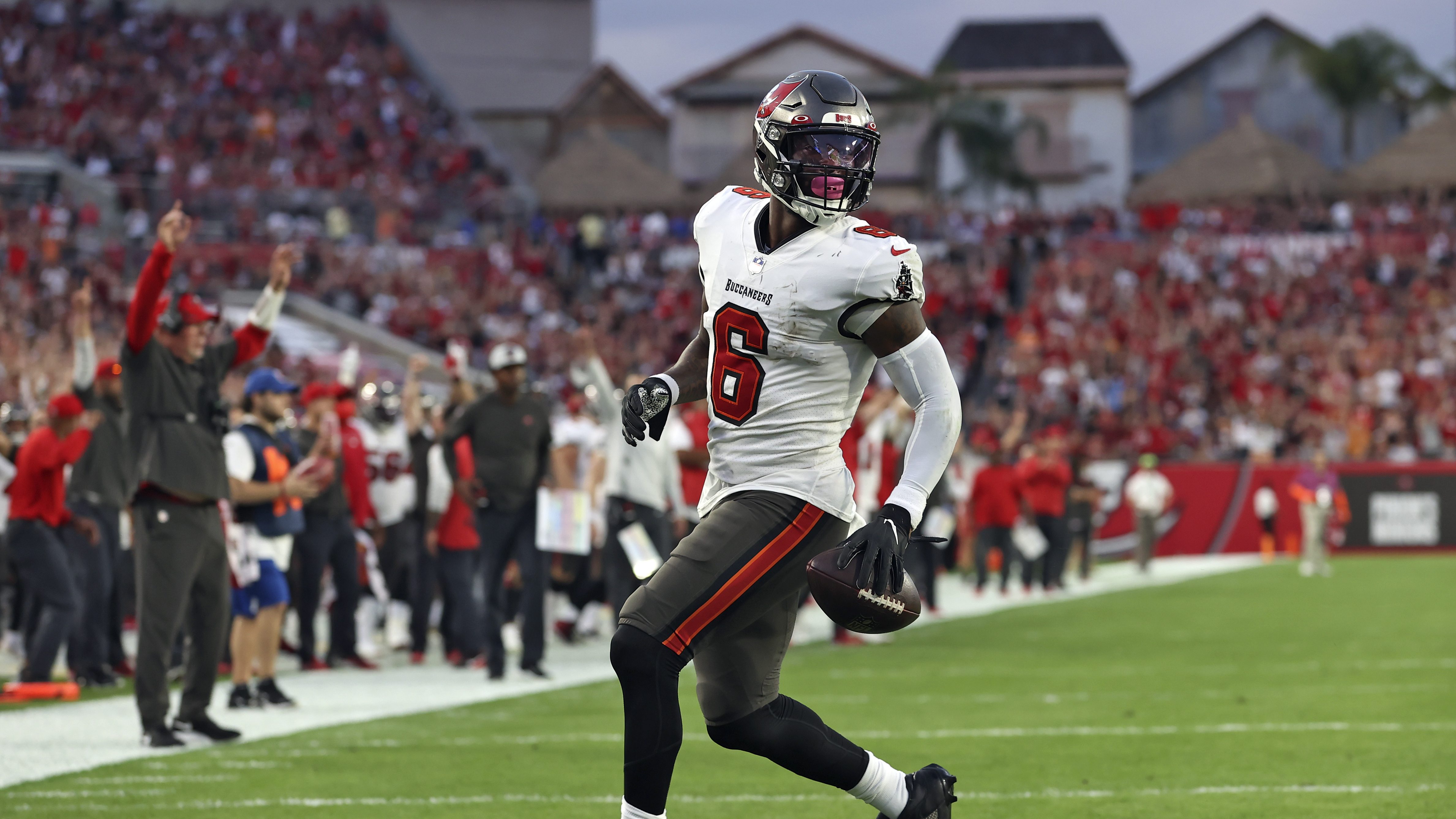 TAMPA, Fla. (AP) — Tom Brady topped 5,000 yards passing for the second time in his career and the Tampa Bay Buccaneers set a franchise record for regular-season victories with a 41-17 win over the Carolina Panthers on Sunday.

Brady completed 29 of 37 passes for 326 yards and three touchdowns before taking the last half of the fourth quarter off, finishing with a career-best 5,316 yards passing and a Bucs single-season record 43 TD passes for the defending Super Bowl champions.

Mike Evans caught two of Brady’s TD passes, giving him a club-record 14 scoring receptions this year. He also became the first player in NFL history to begin a career with eight consecutive seasons with at least 1,000 yards receiving.

Tampa Bay (13-4) broke the club record for victories in a regular season set in 2002 and also earned the No. 2 seed in the NFC with the Rams losing to the 49ers in overtime. The Bucs will host the Philadelphia Eagles next week.

Carolina (5-12) finished on a seven-game losing streak that leaves coach Matt Rhule’s future in question. The Panthers are 10-23 in two seasons under the former Temple and Baylor coach, who signed a seven-year contract to move to the NFL in 2020.

The victory capped a tumultuous week for the Bucs, who terminated the contract of oft-troubled receiver Antonio Brown, who left the team in the middle of the previous Sunday’s 28-24 come-from-behind victory over the New York Jets.

Tampa Bay trailed that game by two touchdowns when Brown removed his jersey, shoulder pads and undershirt before doing some jumping jacks and waving to fans at MetLife Stadium as he made his way to the locker room.

The player later said he was cut for refusing to play through an ankle injury. Coach Bruce Arians countered that Brown ’s bizarre exit came after the receiver declined to re-enter the game because he upset about not having the ball thrown to him often enough.

Brady rallied the defending champs to a victory over the Jets and had to overcome another slow against Carolina, which drove 75 yards after the opening kickoff to take a 7-0 lead on Sam Darnold’s 2-yard TD pass midway through the first quarter.

The Panthers squandered an opportunity to go up by double digits, turning the ball over on downs at the Tampa Bay 1 before the Brady turned the game around with an eight-play, 92-yard touchdown drive in the final minute of the first half.

Completions of 37 yards to Evans, 19 yards to Rob Gronkowski and 24 yards to Breshad Perriman helped Brady move into position to give his team a 10-7 halftime lead with a 1-yard TD pass to Le’Veon Bell.

Ke’Shawn Vaughn’s 2-yard TD run early in the third quarter built the lead to 17-7. Evans caught TD passes of 3 and 20 yards, and receiver Scotty Miller scored on a 33-yard run in the fourth quarter for the Bucs.

Darnold completed 29 of 42 passes for 219 yards, two touchdowns and one interception for the Panthers.

Panthers: CB Rashaan Melvin left with a head injury in the first half and did not return.

Buccaneers: WR Cyril Grayson (hamstring) left in the first half and did not return. … RB Ronald Jones (ankle), OLB Jason Pierre-Paul (shoulder) and CB Richard Sherman (Achilles) were inactive. The Super Bowl champs also were without LB Shaquil Barrett, LB Lavonte David and RB Leonard Fournette, who are recovering from injuries not expected to keep them sidelined during the playoffs.

Panthers: First order of business in offseason figures to be decision on whether coach Matt Rhule keeps his job.

Buccaneers: Entered Sunday as the No. 3 seed in the NFC, but moved up to No. 2 with Rams losing to the 49ers in overtime. The Bucs will host the Philadelphia Eagles next week.