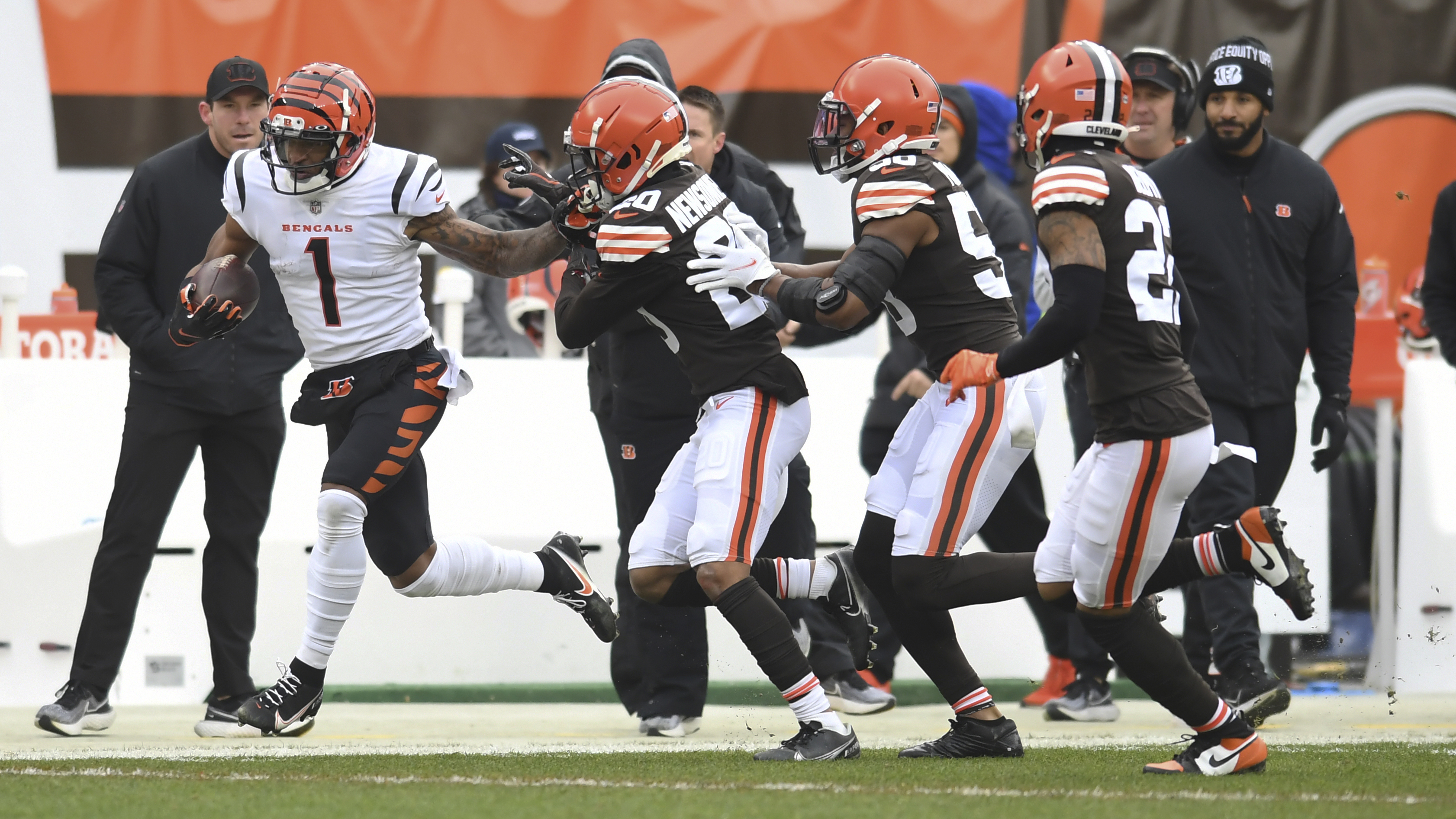 CINCINNATI (AP) — The Cincinnati Bengals wanted to be rested and ready for the first round of the playoffs so they didn’t play many of their key starters in the regular-season finale against the Cleveland Browns.

Star quarterback Joe Burrow watched Sunday’s game from home, and many starters either got a rest or were on the reserve/COVID-19 list. Ja’Marr Chase played only long enough in the first quarter to break the team record for receiving yards in a season.

There weren’t many conclusions to be drawn from Cincinnati’s mundane 21-16 loss to the Browns. The AFC North champion Bengals moved on quickly to start preparing to host the Las Vegas Raiders on Saturday in the playoffs.

Cincinnati (10-7) is hoping to have the banged-up Burrow and his cast — one of the best receiving groups in the game — physically and mentally refreshed for the team’s first postseason game since the 2015 season. Chase played only briefly Sunday; receivers Tee Higgins and Tyler Boyd sat out.

Just getting there won’t be good enough for the Bengals, who haven’t won a playoff game since the 1990 season. They beat the Houston Oilers 41-14 at Riverfront Stadium in the wild-card round that time before being eliminated the next week by the then-L.A. Raiders.

The next seven times Cincinnati made the playoffs, it was one and done.

“That’s all we constantly hear,” Chase said. “So finally having everybody say the opposite of what they’re used to, that’s what we’re trying to do here.”

The team’s top stars weren’t even born the previous time the city saw a playoff win. Chase (21) is a rookie. Burrow (25) and Higgins (22) are second-year players. Running back Joe Mixon is a five-year veteran but is only 25. Boyd is the elder statesman of the group at 27.

If there was such a thing as an opportune time for the Bengals to take a hit from the coronavirus, the week before a meaningless game was it. Mixon, offensive linemen Trey Hopkins and Quinton Spain, defensive linemen Trey Hendrickson, Larry Ogunjobi, and safety Vonn Bell were among the starters who went on the reserve/COVID-19 list last week. All came off the list Monday.

Granted, the offensive line was without some regulars but protecting the quarterback continues to be an issue for Cincinnati, which started three rookies and a second-year player on the line Sunday.

Chase is a candidate for Offensive Rookie of the Year. His 1,455 yards are the most for an NFL rookie in the Super Bowl era. His 81 receptions and 13 touchdowns are the most ever for a Bengals rookie. He finished 18 yards short of the NFL rookie record for a single season held by Houston’s Bill Groman (1,473 in 1960).

As a stand-in for Burrow, Brandon Allen was unspectacular. He was 15 for 29 for 136 yards and threw a late touchdown to Chris Evans.

Burrow is battered but should be ready to play. Among the other bumps and bruises, he limped off with a sore right knee late in the division-clinching Week 17 win over Kansas City. He also has a sore little finger on his throwing hand that was dislocated Dec. 5. … S Ricardo Allen suffered a concussion Sunday on a helmet-to-helmet hit. … CB Vernon Hargreaves III (ankle) was carted off, returned and went out again. … DT Josh Tupou (knee) went out in the third quarter. … K Evan McPherson (groin) was inactive.

24 — Yards gained by Chase on a wide-receiver screen in the first quarter that allowed him to break the Bengals single-season receiving record of 1,440 held by Chad Johnson (2007).

Get everybody healthy, especially Burrow, for Saturday. The Bengals beat the Raiders 32-13 in Las Vegas back on Nov. 21. Now the Raiders (10-7) get a rematch at Paul Brown Stadium with much more on the line.