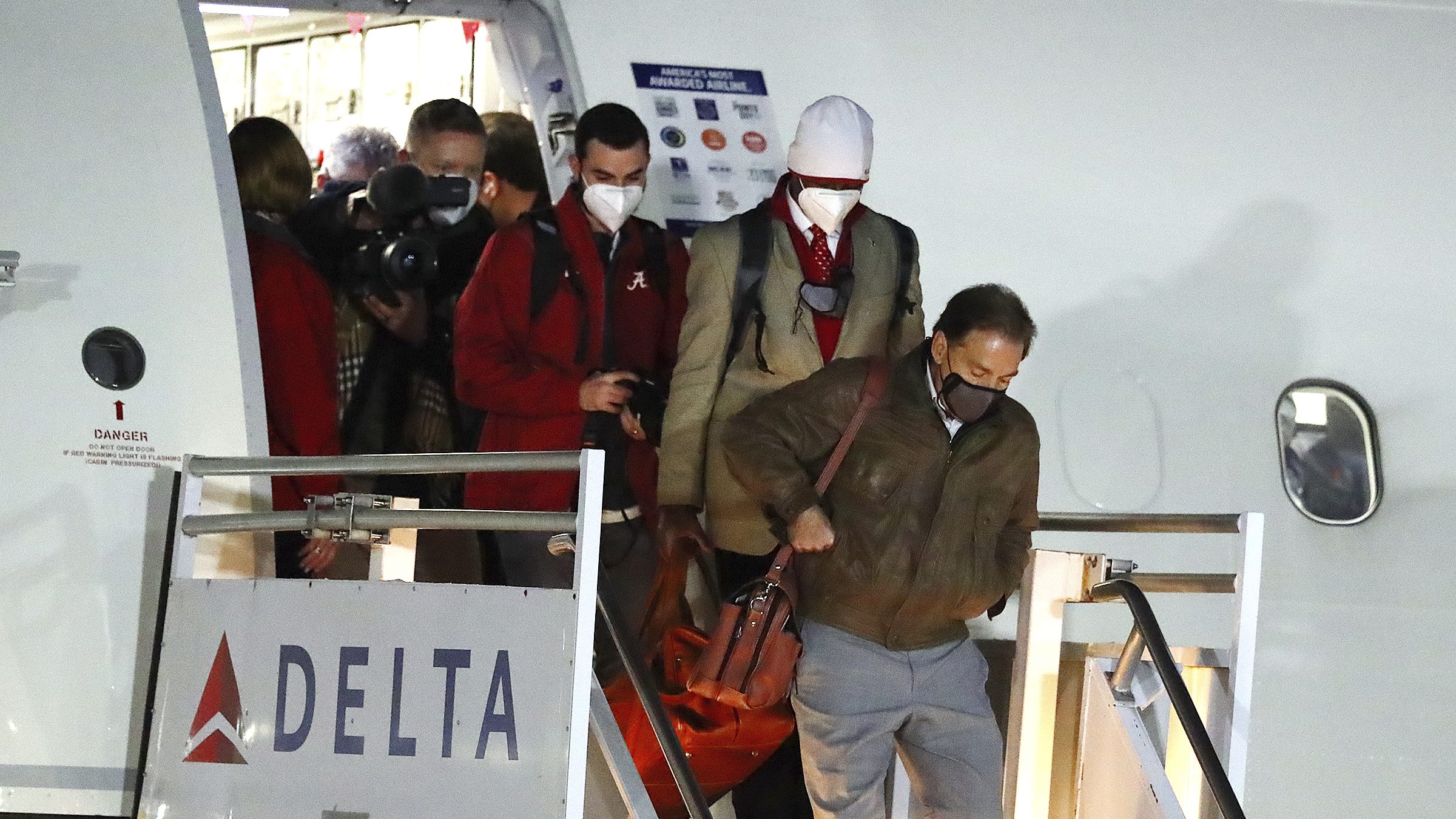 INDIANAPOLIS (AP) — Nick Saban strolled off the plane in frigid Indianapolis with a look that got his players’ attention.

Somehow, the 70-year-old coach keeps finding ways to relate to guys young enough to be his grandchildren.

This time, it was a leather bomber jacket.

“His jacket was very cool,” Alabama safety Jordan Battle said. “I haven’t seen Coach Saban in style like that. To see that he has a little swag, it kind of brings joy to my heart.”

Saban may come across like an inflexible curmudgeon, but he’s really more of a chameleon — forever transforming, forever reshaping, forever making himself relevant to those who play for him, no matter the generation gap.

It’s why, after all these years and well past retirement age, he remains the most dominant figure in college football.

It’s why, as his mighty Alabama dynasty prepared for a rematch against Georgia in another national championship game Monday night, he shows no signs of slowing down.

Bryce Young, his Heisman Trophy-winning quarterback, said the key to Saban’s greatness is “how he’s adapted over the years.”

It’s certainly changed for the Crimson Tide during Saban’s 15 years in Tuscaloosa.

He’s a defensive coach at heart, someone who would be content to win every game 10-7. Indeed, that philosophy worked just fine in the early part of his Alabama tenure, as he began to collect national championships at a rate that would surpass everyone who’s ever coached the game.

Just a decade ago, his title-winning team led the nation in every major defensive category, allowing just 8.2 points a game.

But the sport has evolved greatly since then, and Saban has come along for the ride.

His 2020 team won all 13 games to give Saban his sixth national title at Alabama and the record seventh championship of his career, all while allowing nearly 20 points a game. In two of the victories, the Crimson Tides allowed more than 40 points.

“For him to be able to adapt multiple times throughout his career, that’s not easy for guys who have been doing it so long,” Young said. “And for him to have all the success he’s had and still be able to adapt and kind of change how he approaches everything, we see that. We recognize that, and that means a lot for us.”

This year’s team required an especially deft touch. While blessed with his usual plethora of five-star recruits, Saban’s team wasn’t nearly as deep or dominant as it’s been other years.

The Tide lost to Jimbo Fisher and Texas A&M, the first time Saban has ever tasted defeat against one of his former assistants. They struggled to beat Florida and LSU and Arkansas. They looked down and out against Auburn before a stunning rally culminated with a 24-22 victory in the fourth overtime.

Rather than berate his team, Saban took on Bama’s fickle fan base. In a memorable tirade on his weekly radio show, he blasted “all you self-absorbed folks out there that can’t look past your own self to appreciate what other people are doing.”

It was another masterful bit of coaching by Saban, who made it clear to his players that he had their back.

They reciprocated with two of their best performances of the season, stunning then-No. 1 Georgia 41-24 in the Southeastern Conference championship game and delivering a 27-6 beatdown to unbeaten Cincinnati in the Cotton Bowl semifinal game.

No matter how much he bends, Saban’s word is always final. Anyone who bucks his authority is assured of a very short stay in Tuscaloosa. But the relationship seems to work with most players, perhaps because no one arrives on campus with any illusions.

“Some coaches can make you promises in recruiting,” said Young, a Californian who became the highest-rated quarterback ever signed by Saban. ”When you start to hear those promises, it starts to become a little bit of a red flag.

“Coach Saban was always direct with me. He never promised me anything. He only promised me opportunities to compete. He told me from the jump in recruiting that this wasn’t a place for everyone and exactly the type of player and person that he was looking for and that he knows thrives in this organization. That was the person and player that I strive to be.”

Don’t forget his fashion sense, either.

“Coach’s jacket was fine,” Young said, delivering his own review of Saban’s arrival attire in Indy. “Coach is always going to step into something we haven’t seen before as a team. So that’s to be expected.”