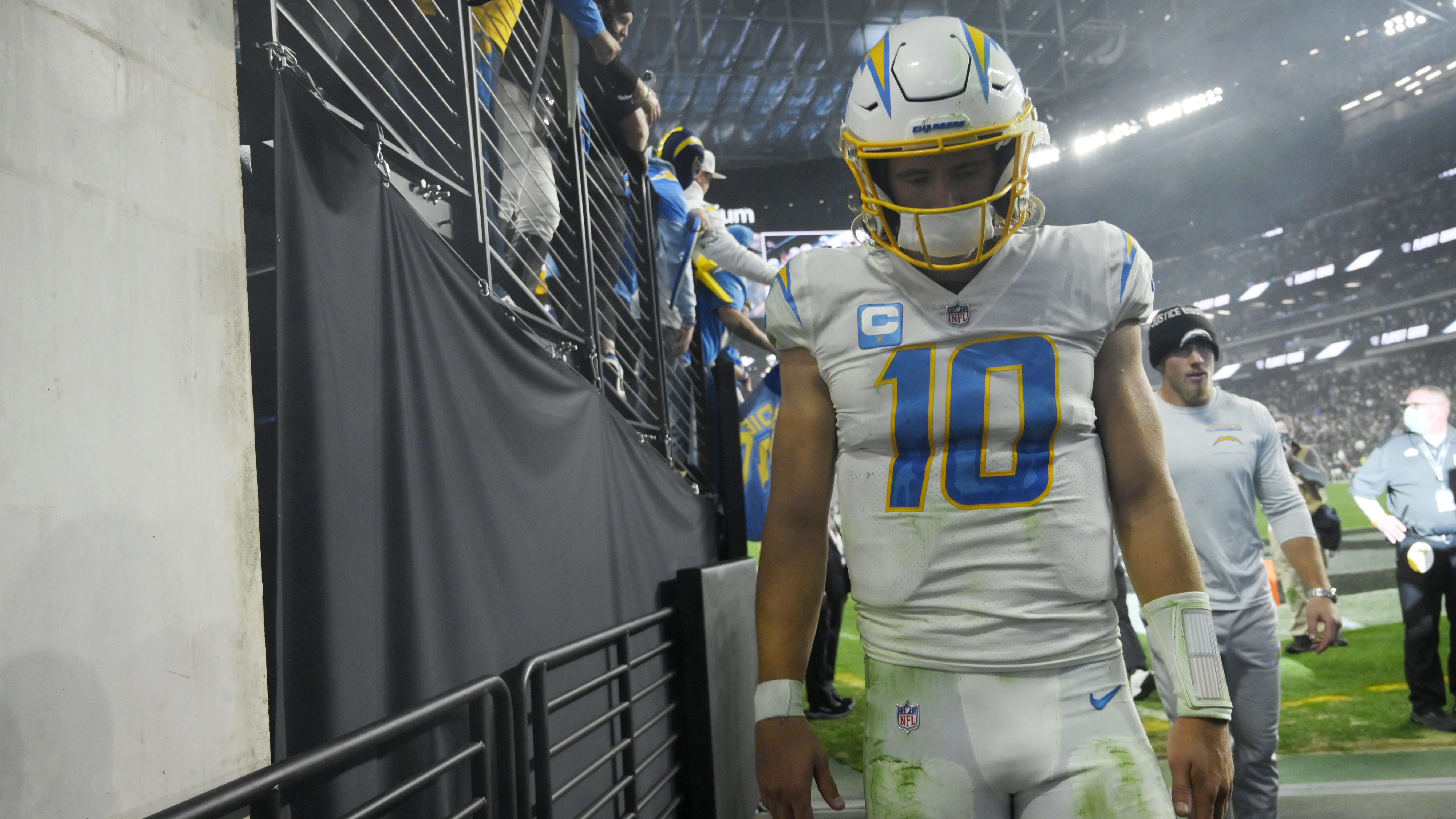 LAS VEGAS (AP) — Brandon Staley is disappointed he won’t get to see, in his mind, one of the best players in the NFL in the playoffs.

Justin Herbert played like one of the NFL’s finest when the Los Angeles Chargers needed him most. But, it wasn’t enough.

The second-year quarterback and last season’s offensive rookie of the year threw a season-high 64 times, finishing with 383 yards and three touchdowns in the Chargers’ 35-32 loss to the Las Vegas Raiders on Sunday night that eliminated them from playoff contention.

“It’s tough. The whole goal is to get to the playoffs and eventually win a Super Bowl,” Herbert said. “It didn’t go our way tonight and that’s the unfortunate part.”

The Pittsburgh Steelers clinched the No. 7 seed in the AFC by way of the Chargers’ loss, while the Raiders are the fifth seed. They’ll face the Cincinnati Bengals on Saturday in the wild-card round.

The Chargers missed the postseason for the seventh time in eight seasons, yet it’s hard to point the finger at Herbert as the culprit. The former Oregon signal-caller finished with 5,014 yards and 38 touchdown passes, both upticks from his record-breaking rookie campaign (4,336 yards, 31 touchdowns in two fewer games).

“I hate that he’s not in the tournament, not competing against the best players in the NFL,” said Staley, the first-year Chargers coach that finished 9-8 in his first season and in third place in the AFC West. “I hate it for him.”

The Chargers trailed 29-14 with 8:23 remaining following a 52-yard field goal by Daniel Carlson. Up to that point, their second half was horrid. Los Angeles ran 12 plays through the first 29:37 of the second half.

Those drives ended with a missed 51-yard field goal try by Dustin Hopkins, a 2-yard loss on 4th-and-1 from the Chargers’ own 18-yard line with 10:50 remaining in the third quarter, and Herbert’s lone interception, by longtime Chargers corner Casey Hayward, with 13:03 left.

Herbert responded with two fourth-quarter drives that gave the Chargers renewed life. He capped a 14-play, 75-yard drive with a 23-yard touchdown pass to Josh Palmer on 4th-and-21, cutting their deficit to 29-22.

On the ensuing drive after the Raiders went three plays and out, Herbert drove the Chargers down the field with three fourth-down conversions (one via penalty) and found Mike Williams for the game-tying 11-yard score as time expired.

“I thought we executed well on fourth down, especially those two drives, but it wasn’t enough and that’s the unfortunate part,” Herbert said. “We were too far behind and offensively we didn’t get enough going in the first half.”

Williams was bracketed by Hayward and safety Dallin Leavitt with both closing in on the receiver fast.

“Justin put the ball the only place I could get it,” Williams said.

The Chargers had the ball once in overtime, a drive that resulted in a tying 41-yard field goal from Hopkins. Williams nearly had the game-winning touchdown off a double deflection in the right corner.

A tie would’ve put the Chargers and the Raiders in the playoffs after the Indianapolis Colts lost to the Jacksonville Jaguars 26-11 earlier Sunday. The chances for that heightened with the Raiders facing a 3rd-and-4 situation from the Los Angeles 39-yard line with 38 seconds remaining.

The Chargers called timeout for, what Staley said, was to get the right personnel on the field to prepare for the run.

Raiders running back Josh Jacobs, who rushed for a season-high 132 yards and a touchdown, sprinted 10 yards on the next play, setting up Carlson’s game-winning 47-yard field goal as time expired.

“I had never been rooting for a tie more in my life,” Herbert said. “That’s the unfortunate part of being so close.”

Staley said the future is bright with the Chargers, and it begins with the play of his quarterback. Herbert was drafted No. 6 overall in 2020 as the heir-apparent to franchise icon Philip Rivers. He has remained a constant since his rookie season, and the Chargers won two more games than last year.

There’s reason within the Chargers’ locker room to be excited heading into the third year of the Herbert Era.

“He’s been amazing all season,” Chargers safety Derwin James said of Herbert. “I just hate we didn’t get it done for him. Just having a guy like that always gives you a chance.”