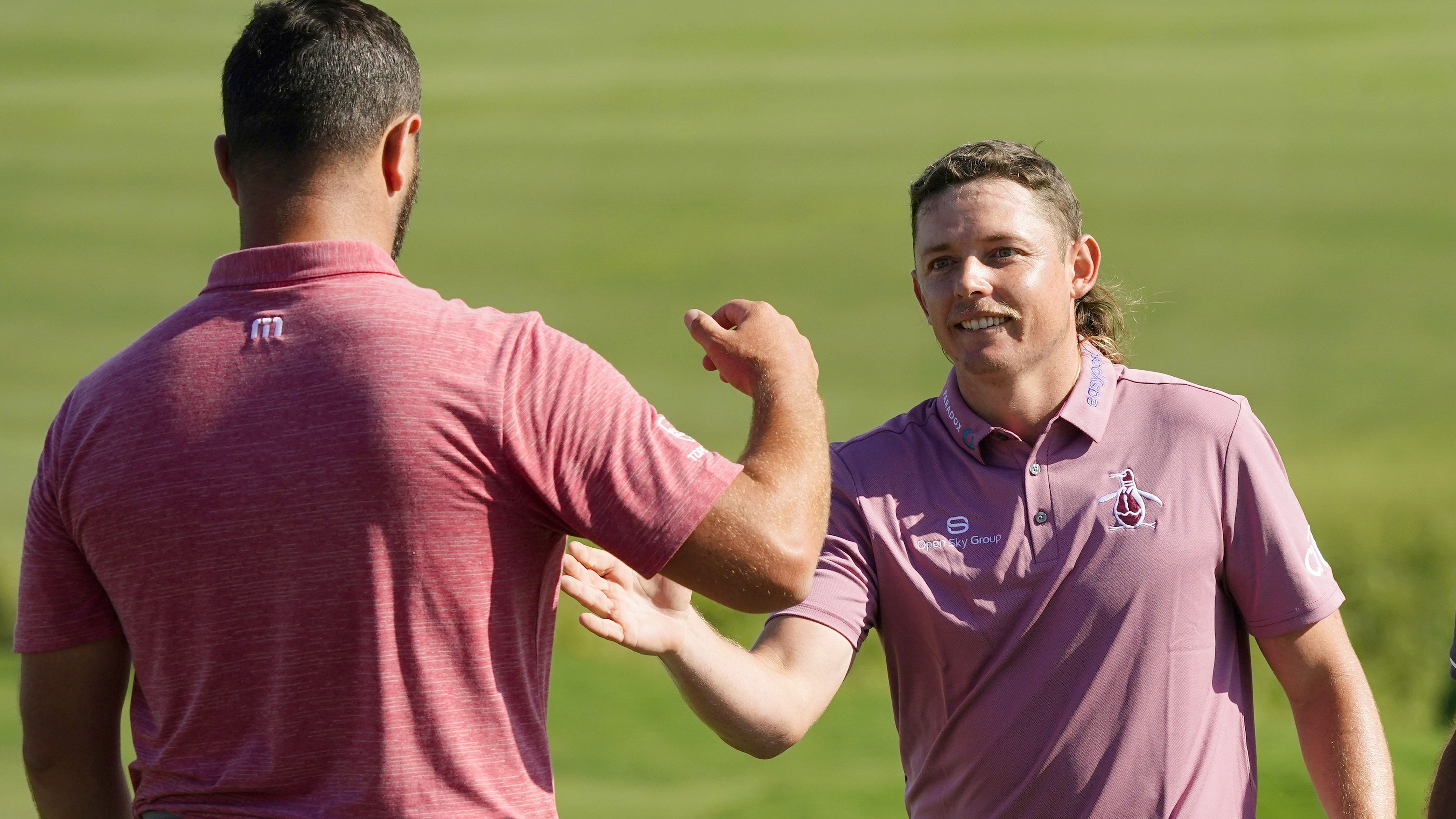 KAPALUA, Hawaii (AP) — Cameron Smith has a place in the PGA Tour record book for finishing 34-under par, the lowest of anyone in history. Just as important as a number to the unassuming Australian is a name.

Over the final two days at the Sentry Tournament of Champions, and particularly the final two hours Sunday at Kapalua, Smith had to hold off Jon Rahm, the No. 1 player in the world.

They were never separated by more than two shots over the final 28 holes. Smith had to protect a one-shot lead over the final seven holes, with the Spaniard applying enormous pressure every step of the way.

“I felt like I couldn’t miss a shot, otherwise Jon was going to overtake me,” he said.

The final act was a putt from just over 90 feet away on the 18th hole, down a ridge and then picking up speed with the grain, knowing that two putts for a final birdie likely would be enough. It settled about 3 feet from the cup, Rahm missed his eagle putt from just outside 50 feet and Smith rapped in for an 8-under 65, the final stroke of a masterpiece.

The numbers are what made this most memorable, no matter how predictable. A forecast of occasional showers and tropical gusts gave way to four days of sunshine, very few clouds and even less wind.

The fairways were soft and the greens were pure, a product of rain before this elite field of PGA Tour winners even arrived on Maui.

There was no defense of the Plantation course. The final three rounds featured the three lowest average scores in the 24 years the tournament has been held at Kapalua.

A year ago in typical breezy conditions, Harris English won in a playoff after finishing 25 under. Five of the six years before that, the winning score was 21 under or better.

“When you come to a golf course where the only defense is wind — you expect 20 miles an hour here, and we usually shoot 20 to 26 under and win the tournament — you get the same golf course with no wind, what do you expect?” Rahm said.

Rahm had few complaints. He tied the Plantation course record with a 61 on Saturday, and had 66 each of the other three rounds to finish a 33-under par.

That wins any other week, usually by a mile.

Just not this one.

Until the start of the new year, only three players had ever reached 30 under or lower on the PGA Tour. Ernie Els held the record at 31-under par when he won at Kapalua in 2003. Jordan Spieth won at Kapalua at 30 under in 2016. Dustin Johnson finished at 30 under at Liberty National to start the PGA Tour postseason in 2020.

Three players were better than that this week alone. Matt Jones finished two shots behind at 32 under, thanks to a pair of eagles and a 50-foot birdie putt in a five-hole stretch on the back nine as he tried to keep pace.

“If you told me I would have shot 32 under, I would have been more than happy to sit in the clubhouse and let everyone play and see what happens,” Jones said.

Els and Spieth each won by eight shots. Johnson won by 11.

Smith won by one.

The rest of the time, they were matching shots, matching putts. And then Rahm ran out of holes and had to settle for the second-lowest score to par in history and a runner-up finish.

“I have every reason to be smiling,” Rahm said about his score. “It’s a bittersweet moment.”

No matter the score, or the conditions, it was an ideal start to the year for Smith. One of his goals was to crack the top 10 in the world for the first time, and his fourth career PGA Tour victory moved him to No. 10.

Two of his victories were the team variety in New Orleans. The two individual titles were in Hawaii, with Smith winning the Sony Open in Honolulu two years ago.

With a lei draped around his neck, he headed over to the next island with loads of confidence from the way he played and who he beat.

“There’s many reasons why Jon Rahm is the best player in the world and I witnessed it over the weekend,” Smith said. “But to be able to hold him off, yeah, it was quite satisfying. I feel like I did a lot of work over the offseason. What better way to kind of start a season with holding him off.”