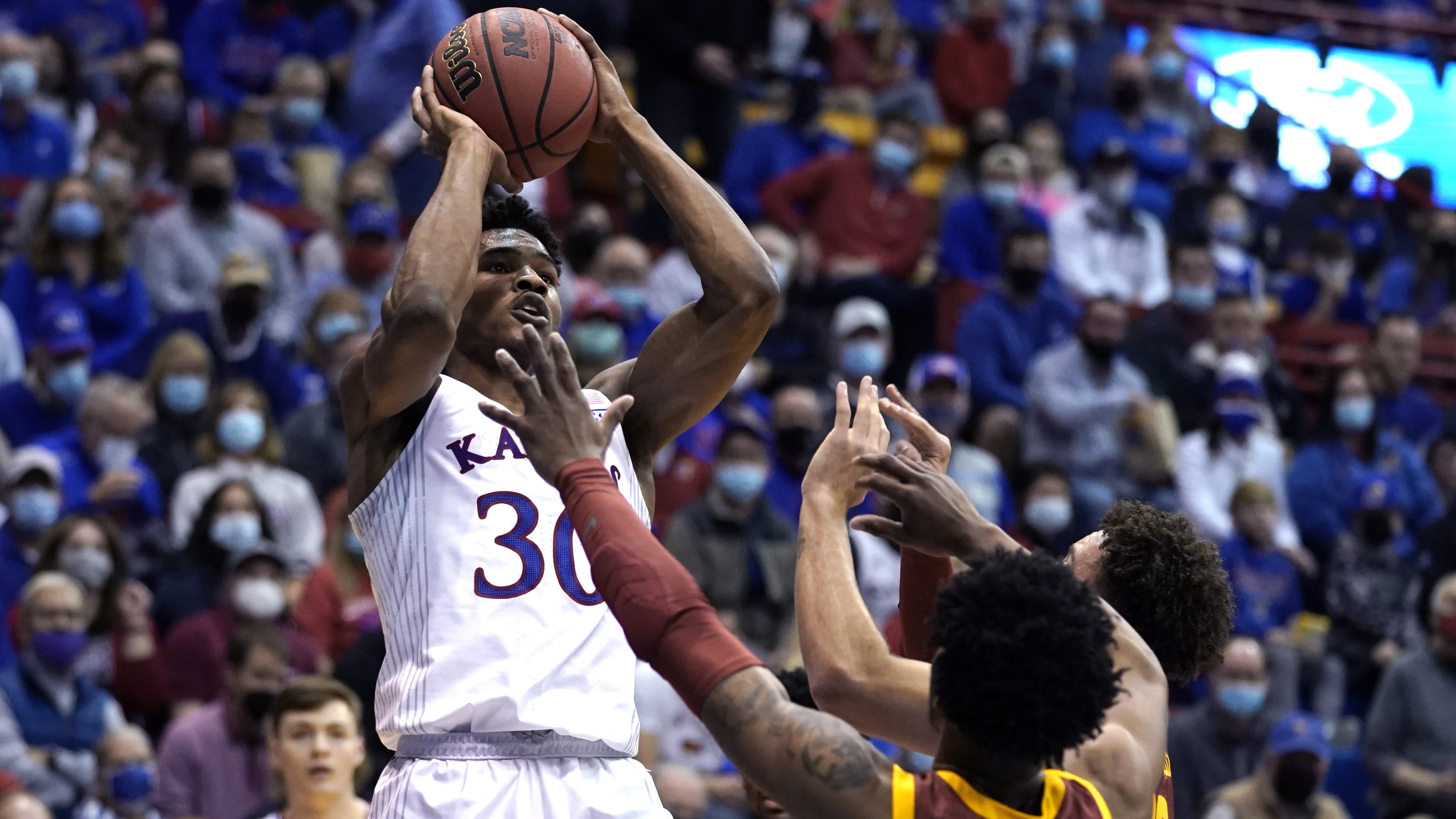 LAWRENCE, Kan. (AP) — Dajuan Harris hit a driving layup with 8 seconds left, and No. 9 Kansas got the better of a wild finish against No. 15 Iowa State to win 62-61 on Tuesday night.

There were four lead changes in the final 38 seconds, and the Jayhawks (13-2, 2-1 Big 12) survived when Iowa State’s Gabe Kalscheur missed a 3-pointer just before the buzzer.

“All eyes were on (Tyrese) Hunter coming down the court,” Kansas’ Ochai Agbaji said of the last shot. “I didn’t even notice that (Kalscheur) was open to the left. He had a good look.”

Agbaji scored 22 points to lead Kansas, which rebounded from a loss at Texas Tech on Saturday. Christian Braun had 13 points and Harris had 12.

“I haven’t hit a game-winner in so long,” Harris said. “I thought Ochai was going to take the last shot. I heard Coach say, ‘Get in the lane,’ so I drove and was able to make the layup.”

Neither team led by double figures at any point, and Kalscheur’s 3-pointer with 1:03 left drew Iowa State within 58-57. The Cyclones took the lead with 38 seconds left on a long jumper by Caleb Grill.

Agbaji hit two free throws to put Kansas back on top with 25 seconds left. Then Brockington hit a jumper from the wing and Harris responded with his decisive layup as neither team called timeout before the buzzer.

“I would have called timeout (for the final offensive play), but Och had the ball,” Kansas coach Bill Self said. “Och drove it in to force a crease. That’s about as good you can do in that situation. Defensively, we did a good job getting back. (Kalscheur) got a good look, but he just missed it.”

Kansas was playing without preseason Big 12 player of the year Remy Martin, who has a sore knee.

“We missed Remy,” Self said. “When you negate your own speed, and play against guards like that, that’s hard. We looked like a slow team. We need Remy to get healthy.”

Kansas started quickly in the second half. Jalen Coleman-Lands made three free throws and then Braun’s 3-pointer gave the Jayhawks a 37-33 lead.

Iowa State missed nine of its first 10 shots of the second half. By the time Iowa State scored, more than four minutes had passed and Kansas led by five.

Iowa State used a 10-0 run midway through the first half to open a 19-10 lead. But the Jayhawks clawed right back into the game. Agbaji hit a 3-pointer from the corner to tie the score at 26-all. Iowa State led 33-31 at halftime.

Iowa State: The Cyclones’ 1-3 start against premier Big 12 competition should not obscure their incredible improvement over last season, when they went 2-22 overall and 0-18 in conference play. Coach T.J. Otzelberger has Iowa State in contention for an upper-division finish in the Big 12.

Kansas: The Jayhawks needn’t be ashamed of their loss to Texas Tech, which beat No. 1 Baylor on Tuesday night. Playing without Martin, Kansas showed its depth.