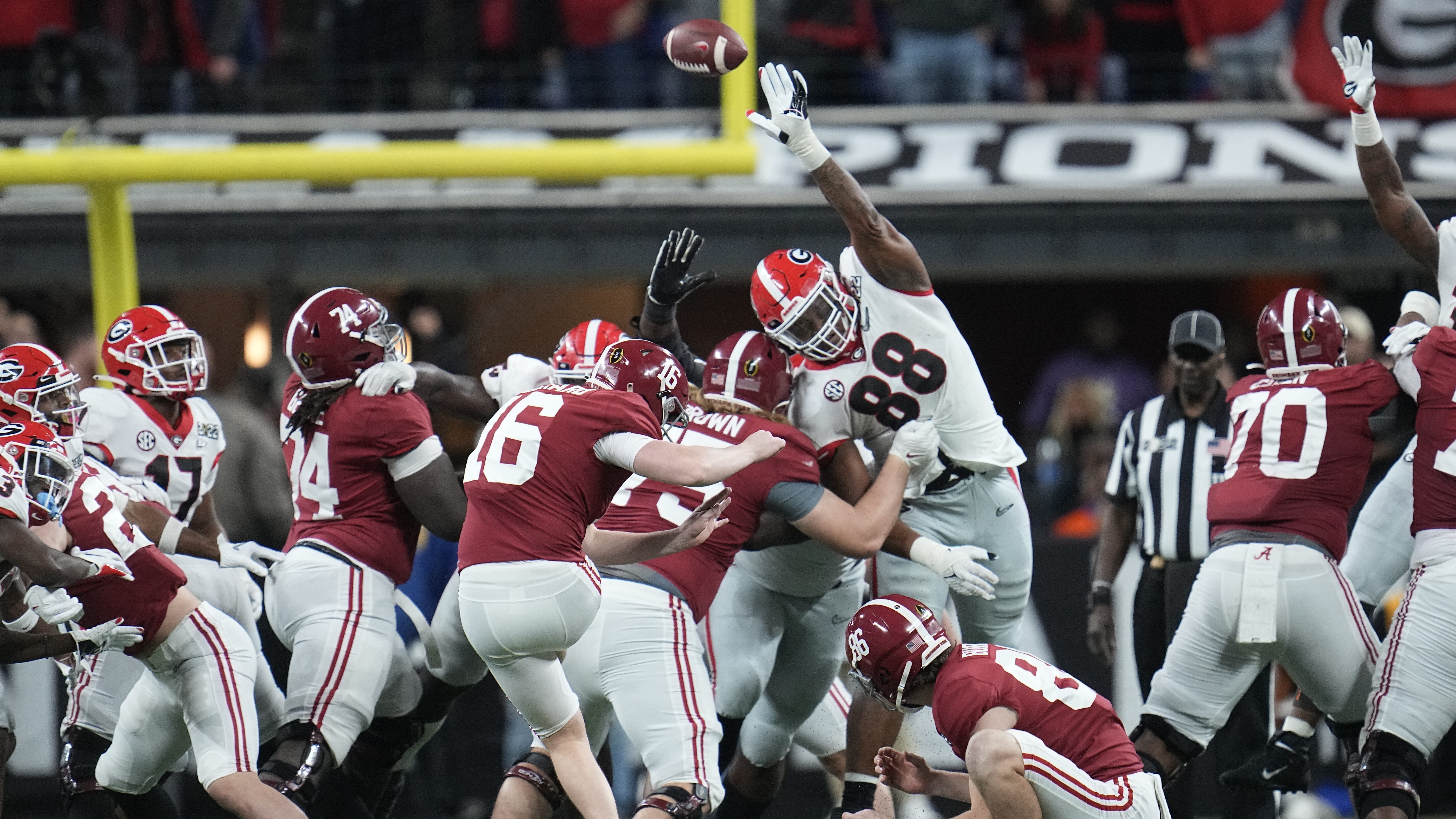 INDIANAPOLIS (AP) — Alabama had plenty of chances Monday — but rarely turned those opportunities into touchdowns.

The Crimson Tide settled for field goals on three of four red-zone trips and scored its only touchdown on a 16-yard drive after a Georgia fumble. A blocked field goal prevented Alabama from adding any points after a 17-play drive that took nearly eight minutes off the clock in the third quarter.

Alabama was trying to extend a 9-6 lead when coach Nick Saban sent Will Reichard onto the field late in the third quarter. But the blocked kick changed everything.

Jalen Carter partially blocked it. On the next play, Georgia running back James Cook broke free for a 67-yard run. Zamir White scored the go-ahead touchdown three plays later, and Alabama spent the rest of the game scrambling.

“It’s on me,” quarterback Bryce Young said. “We just weren’t able to execute and finish like we wanted to.”

SMART KEEPS IT SIMPLE ON DEFENSE

After struggling to stop Alabama in the SEC championship game last month, he took a different approach. He wanted his secondary to play more man-to-man coverage and committed to rotating defensive linemen so they could pressure Young.

It worked perfectly. Georgia’s stout defense reverted to form and finally turned the tables on an old nemesis by beating the top-ranked Crimson Tide 33-18 to claim their first national championship in 41 years.

“We felt if we could get off the field on third down we would be fresher,” Smart said. “We really focused on playing man to man and doing it better than they did it. and these guys really bought it into that.”

Smart’s plan was to simplify the coverages and wanted his secondary to challenge Alabama’s short-handed receiving corps that took another big hit in the first half when Jameson Williams left with what appeared to be a left knee injury.

The Bulldogs (14-1) responded by keeping Alabama out of the end zone for most of the game and they came up big when the was hanging in the balance, too.

It was all by design after hearing critics contend the Bulldogs were not well-conditioned enough to trade blows with Alabama’s fast-paced offense.

This time, though, they withstood the hits just long enough until the offense got in sync.

“The defense kept us in this game while we were stumbling over our own feet in the first half,” quarterback Stetson Bennett IV said. “They won this game.”

Kelee Ringo could have made the safe play by taking a knee after picking off Young in the waning minutes. Instead, he saw an opening, raced up the field and scored on the longest interception return in championship game history.

The 79-yard score sealed the victory. Smart wasn’t concerned about the safe thing, though. He wanted Ringo to make the play.

And Bennett didn’t even bother to watch Ringo sprinting toward the goal line.

“I thought he went down as soon as he caught it,” Bennett said as he burst into tears on the sideline.

Georgia fans were all over downtown Indianapolis on Monday and they dominated the stands inside Lucas Oil Stadium.

How obvious was it? When Bulldogs fans did their traditional celebration with camera lights before the fourth quarter, most of the stadium lit up.

But Smart knew there was a disparity even before Monday.