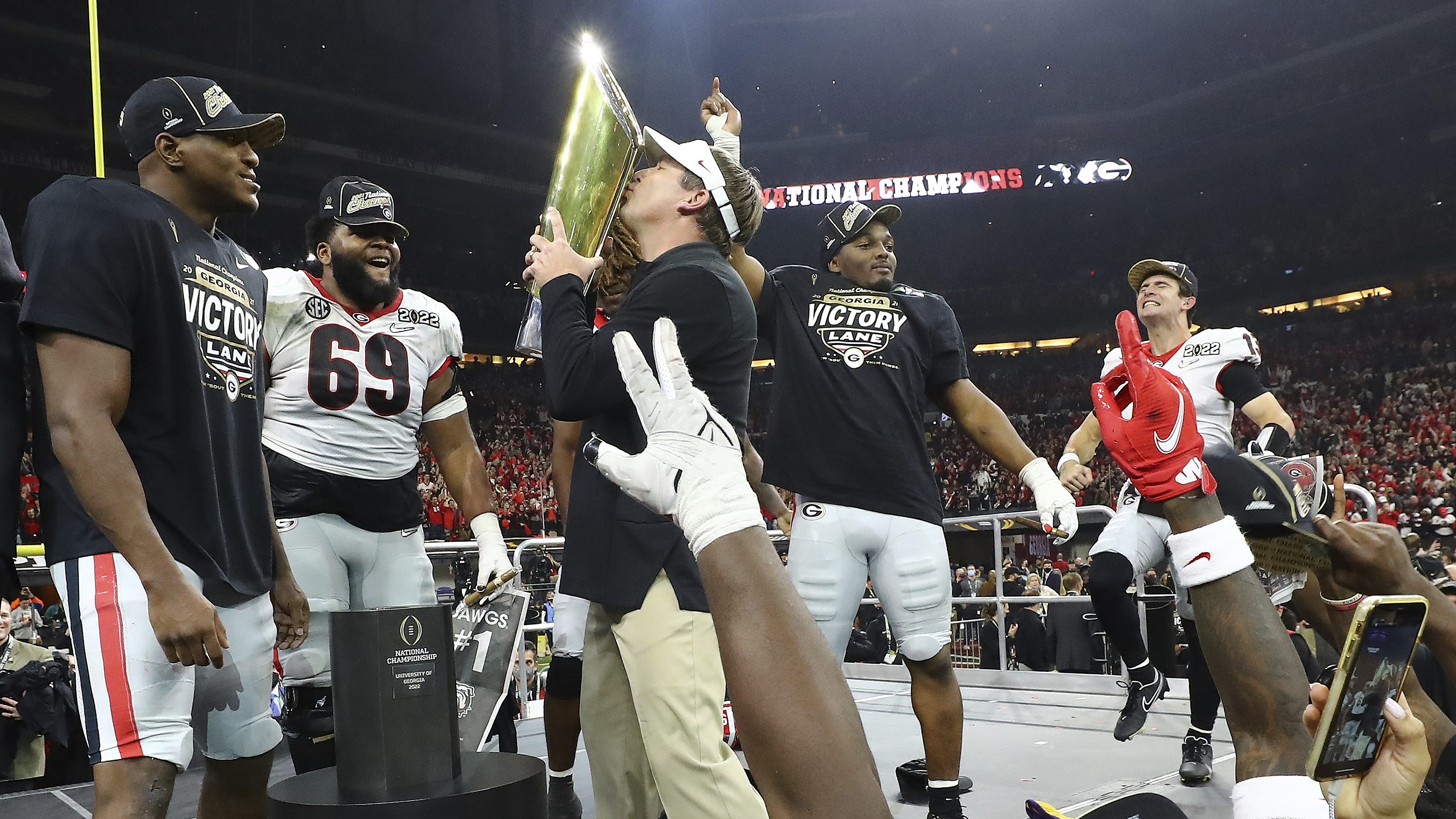 INDIANAPOLIS (AP) — Kirby Smart learned from his former boss that the time for celebrating is short in college football.

Even while he reveled Tuesday in the hangover from Georgia’s first national title since 1980, the coach was already thinking about what comes next.

“The wind blows a lot stronger at the top,” Smart said. “I’ve seen it.”

Now, he’s got one of his own after Georgia rallied for a 33-18 victory over Saban and the Crimson Tide in the championship game Monday night.

The long-overdue party stretched from Indianapolis all the way back to Athens, Georgia, where fans and students stormed the streets in a raucous celebration.

But Smart’s time with Saban taught him that he’s already a bit behind on the 2022 season.

“I know people don’t understand it, but other teams are 10 days up on you because they finished January 1st,” Smart said. “Fortunately, I had a really good mentor and teacher in dealing with that because he’s in it every year. But you fall behind because you’re trying to manage your roster.”

Smart is already concerned about complacency seeping into a team that will spend the entire offseason hearing how great it is.

He doesn’t want the Bulldogs to go another 41 years without a championship.

“I don’t know that our team that’s coming back is prepared for what they’re about to see because there’s a sense of entitlement, there’s a sense of the disease, that has always crept in at Georgia,” Smart said bluntly of his alma mater.

“There’s a huge anointment and entitlement that can affect your program. So now it turns for us to … what we’ve got to do to keep it going.”

Smart knows that he’ll have to replace a number of key players, especially on the defensive side.

Nose tackle Jordan Davis, linebacker Nakobe Dean and end Travon Walker all have a shot at going in the first round of the NFL draft. Tackle Devonte Wyatt, cornerback Derion Kendrick, and linebackers Channing Tindall and Quay Walker are expected to move on as well.

On the offensive side, running back James Cook and linemen Jamaree Salyer and Justin Shaffer have their sights on the pros. Receiver George Pickens missed much of the season with a knee injury, but he also could be headed to the NFL draft.

Smart has several players who plan to enter the transfer portal, though they held off on making their decisions public until after the national championship game.

Finally, Georgia is still putting the finishing touches on another stellar recruiting class.

“We don’t know how many spots we have because we don’t know what some guys are doing,” Smart said. “There’s a lot of work to be done.”

The most intriguing position is quarterback.

Stetson Bennett, a former walk-on who took over the starting job after JT Daniels was injured, is a fifth-year senior but does have another year of eligibility because of COVID-19.

Daniels, a former top recruit who transferred to Georgia from Southern California after the 2019 season, also has an extra year of eligibility remaining. Further down the depth chart are Carson Beck and Brock Vandagriff, soon to be joined by 2022 signee Gunner Stockton.

Hard to envision all of them being with the Bulldogs next season.

Bennett, the offensive MVP of both the Orange Bowl semifinal and the national championship game, isn’t regarded as a top NFL prospect, so he could come back for a sixth season.

Then again, what a way to go out if he decides to get on with his post-college life.

Bennett was tight-lipped about his future Tuesday morning.

“I don’t want to spill all my personal stuff out here on the table,” he said. ”We’ll keep that between me and coach Smart.”

In the meantime, there’s a championship to savor.

The Bulldogs certainly earned it, knocking off college football’s greatest dynasty and the coach generally considered the best to ever walk the sideline.

“Bama is a world-class caliber team,” said safety Lewis Cine, the defensive MVP of the national championship game. “We knew that Bama has always been at the top. And to beat the team at the top is something really surreal.