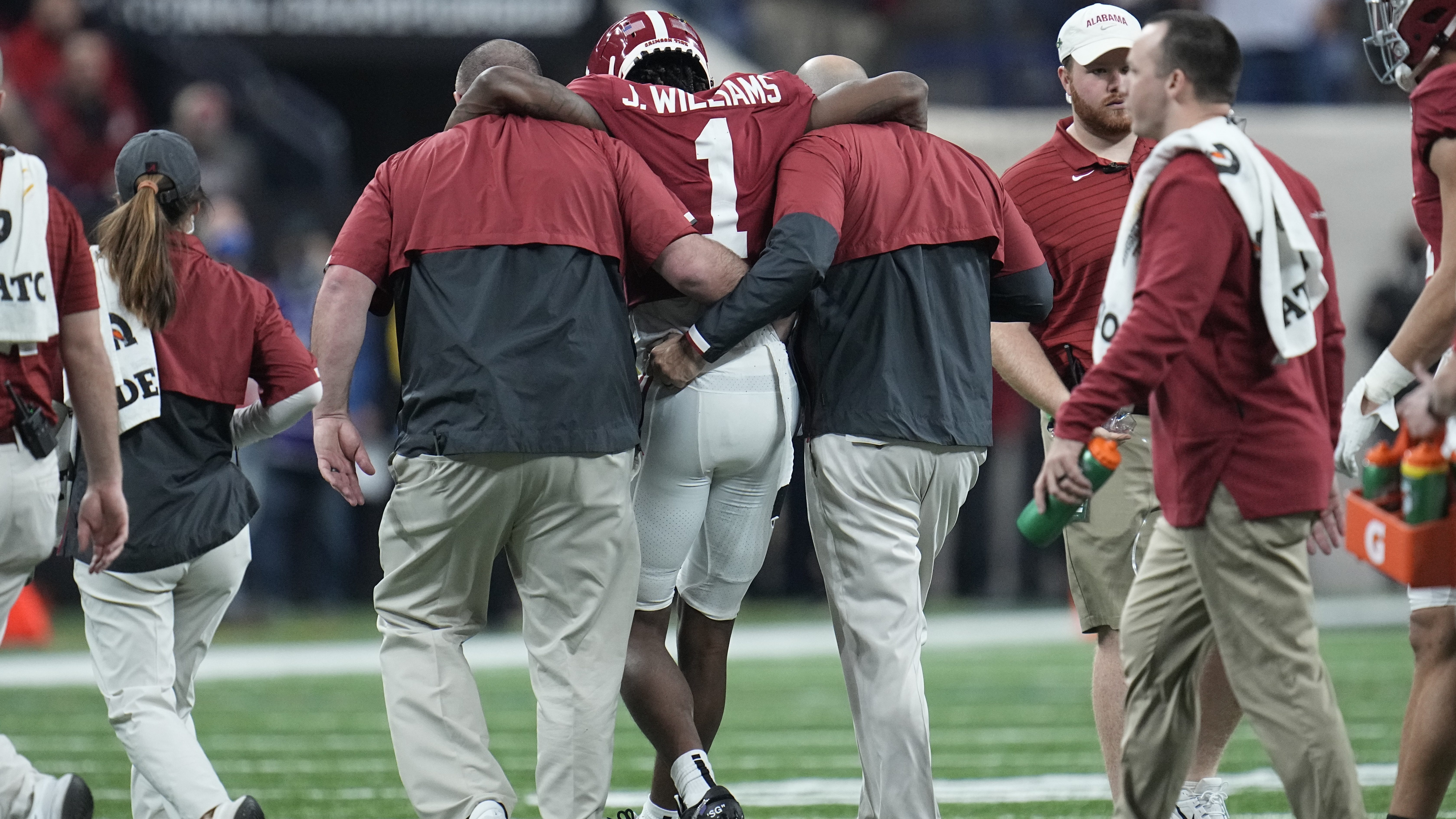 Not with the nation’s best defense in the way.

The Alabama sophomore had his Heisman Trophy-winning season effectively ended by a last-minute pick six in a 33-18 loss to Georgia in the College Football Playoff championship game Monday night in Indianapolis.

All-American Jameson Williams injured his left knee in the first half and didn’t return, joining fellow 1,000-yard receiver John Metchie III on Alabama’s injured list. Missing two of its biggest playmakers, the offense only found the end zone once.

“J-Mo was a great player for us all year,” Tide coach Nick Saban said. “He made a lot of explosive plays. And I think anytime you lose players like him and John Metchie, it certainly has some impact on how you can perform offensively.”

Saban said he wouldn’t know the extent of Williams’ injury until he gets an MRI. The junior and projected first-round pick wanted to get back in the game.

“He actually wanted to play in the second half and the medical staff wouldn’t let him, which I think was smart because he has a future as a football player,” Saban said.

Young pushed the Crimson Tide across midfield in the final two minutes before Kelee Ringo picked off an underthrown downfield pass intended for backup Traeshon Holden and returned it 79 yards for the back-breaking touchdown.

Stuck playing catchup in the fourth quarter, Alabama desperately could have used either of its top pass catchers.

Williams’ injury took away the nation’s top deep threat and the chance to fire away to the speedster with four touchdowns of at least 70 yards.

“Losing someone like J-Mo is tough, but that has been a theme for us, is overcoming adversity,” Young said. “A lot of guys stepped up in a big moment.

Young finished his first season as a starter going 35 of 57 for 369 yards with a touchdown and two interceptions and was his own biggest critic.

“I’m just proud of my guys,” Young said. “I love my guys, every one of them on both sides of the ball. I just wish I could have been better for them tonight.”

Williams had four catches for 65 yards after a seven-catch, 184-yard, two-touchdown performance in the Southeastern Conference title game against the Bulldogs.

Metchie was out with a knee injury sustained in the first half of that first meeting. They had been Young’s go-to receivers all season.

Without his favorite targets, the steady-handed Young was left with less experienced targets like Agiye Hall, Ja’Corey Brooks and Holden. All talented, all fairly green.

When Alabama took over with eight minutes left down a point, Young threw an incompletion to Hall and a pass to Slade Bolden was broken up.

He got it across midfield with a 12-yard pass to tight end Cameron Latu before two incompletions to Brooks and the fateful pick. Brooks had nabbed the biggest catch of the season late against Auburn, when Young marched the Crimson Tide 97 yards to force overtime.

The offense had to settle for five Will Reichard field goal attempts Monday. He made four and had a 48-yarder blocked late in the third quarter.

Latu did have five catches for 102 yards and a 3-yard touchdown.

But Alabama felt the loss of Young’s biggest playmaker.

“Everybody’s prepared to step up because you never know when you’re going to get your next shot,” receiver Slade Bolden said. “So I feel like everybody did a good enough job. And we just couldn’t make the plays and we couldn’t finish tonight. And that’s the story of it.”