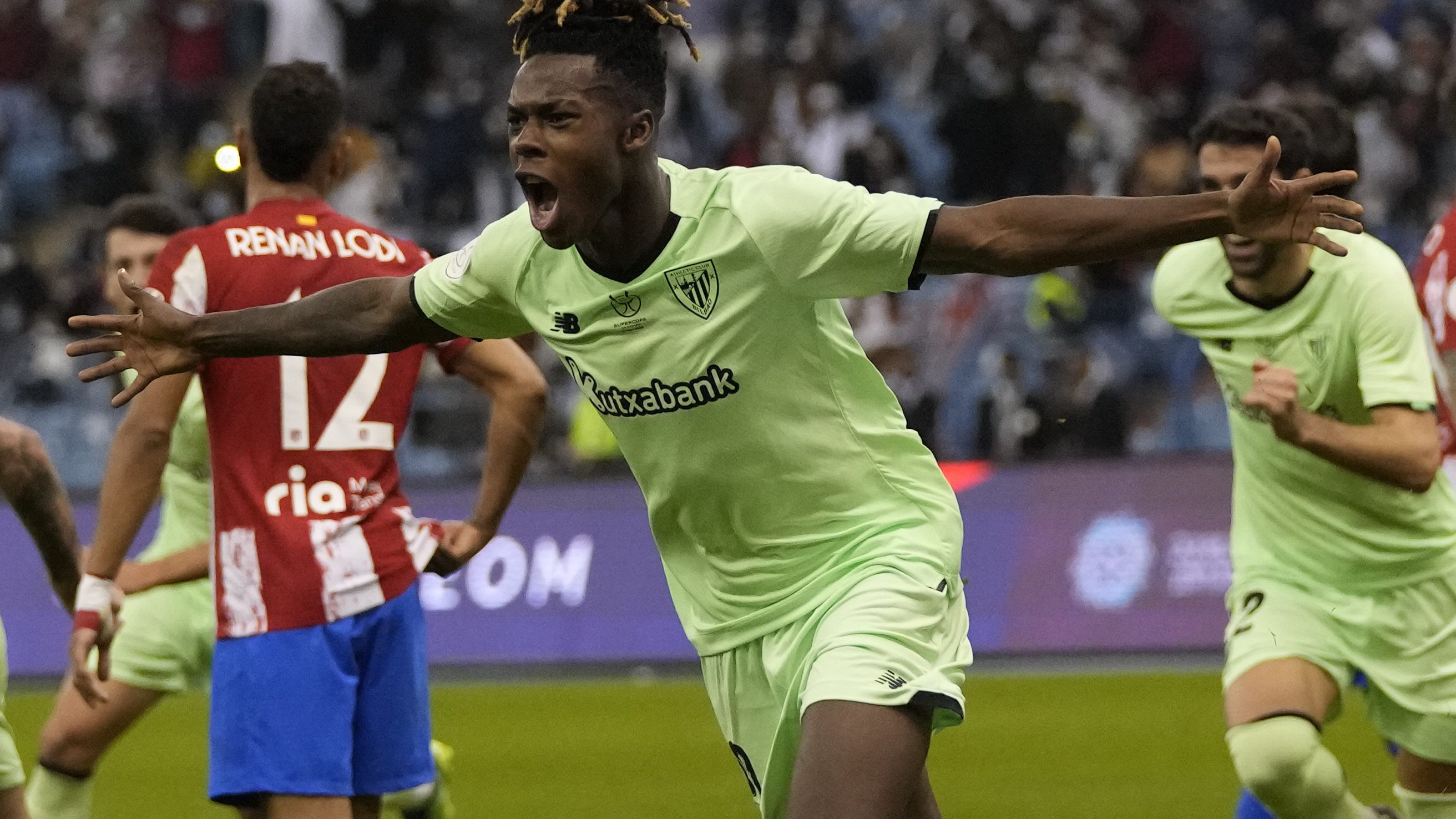 The Basque Country club will play Sunday’s decider against Real Madrid, which defeated Barcelona 3-2 in extra time Wednesday. Athletic won the title last year in a final against Barcelona in Sevilla.

Youngster Nico Williams scored Athletic’s winner in the 81st after Yeray Álvarez had evened the match in the 77th. Atlético had taken the lead with an own-goal in the 62nd.

It was yet another setback for Diego Simeone’s Atlético, which is enduring a poor run in the Spanish league and is unlikely to defend its title.

The 19-year-old Williams, who had scored his first two goals for Athletic in a Copa del Rey match last week, received a long hug after scoring Thursday from veteran forward Iñaki Williams, his older brother.

Athletic will try to win consecutive Super Cup titles for the first time. Its last triumph in the competition before last year was in 2015, when it also defeated Barcelona in the final.

Atlético was seeking its first Super Cup final since 2020, when it lost to rival Madrid in the first edition of the competition to be played in Saudi Arabia.

The Spanish Super Cup returned to the Middle East country after the coronavirus pandemic forced last year’s edition to be played in Spain. The competition was moved to Saudi Arabia — and expanded from two to four teams in a “Final Four” format — as part of a deal reportedly worth 30 million euros ($34 million) a year until 2029.

The decision to play the Spanish tournament in Saudi Arabia drew criticism from human rights activists and fans who preferred the competition stayed in Spain. Among those complaining was Athletic midfielder Raúl García, who said during the week it made “no sense” to play the games away from Spain.

Both teams struggled in attack and created few scoring opportunities, in a stark contrast to Wednesday’s thriller between Madrid and Barcelona.

Atlético took the lead after Félix’s header from a corner kick hit the post and bounced off the back of Athletic goalkeeper Unai Simón and just barely crossed the line.

Athletic came close to equalizing two minutes later when Álvarez’s close-range header was stopped at the goal line by Atlético goalkeeper Jan Oblak. The defender didn’t miss in his second attempt, sending the ball into the corner and away from the Atlético goalkeeper.

Nico Williams scored the winner with a low shot from close range after the Atlético defense failed to clear a cross inside the area. The forward had scored both goals in Athletic’s 2-0 win over Atlético Mancha in the Copa del Rey on Jan. 6.

Atlético lost midfielder Geoffrey Kondogbia because of an injury early in the second half, and defender José María Giménez was sent off in stoppage time after his high kick inside the area hit the head of an opponent.

Atlético started the season well but has struggled recently. It lost four of its last six Spanish league games and dropped 16 points behind leader Madrid with a game in hand.

Athletic’s struggles in the league were worse, having won only two of its last 12 matches in the competition. It sits mid-table just past the halfway point.

Atlético qualified for the Super Cup as the Spanish champion, while Athletic made it as the Copa del Rey runner-up. It lost last year’s final to Barcelona.

Simeone had been tinkering with a few formations in attack but opted to start with João Félix and Ángel Correa in attack, leaving Luis Suárez and Matheus Cunha on the bench. Both came into the match in the second half.

There was a limited crowd at the 62,000-capacity King Fahd International Stadium because of restrictions prompted by the coronavirus pandemic.