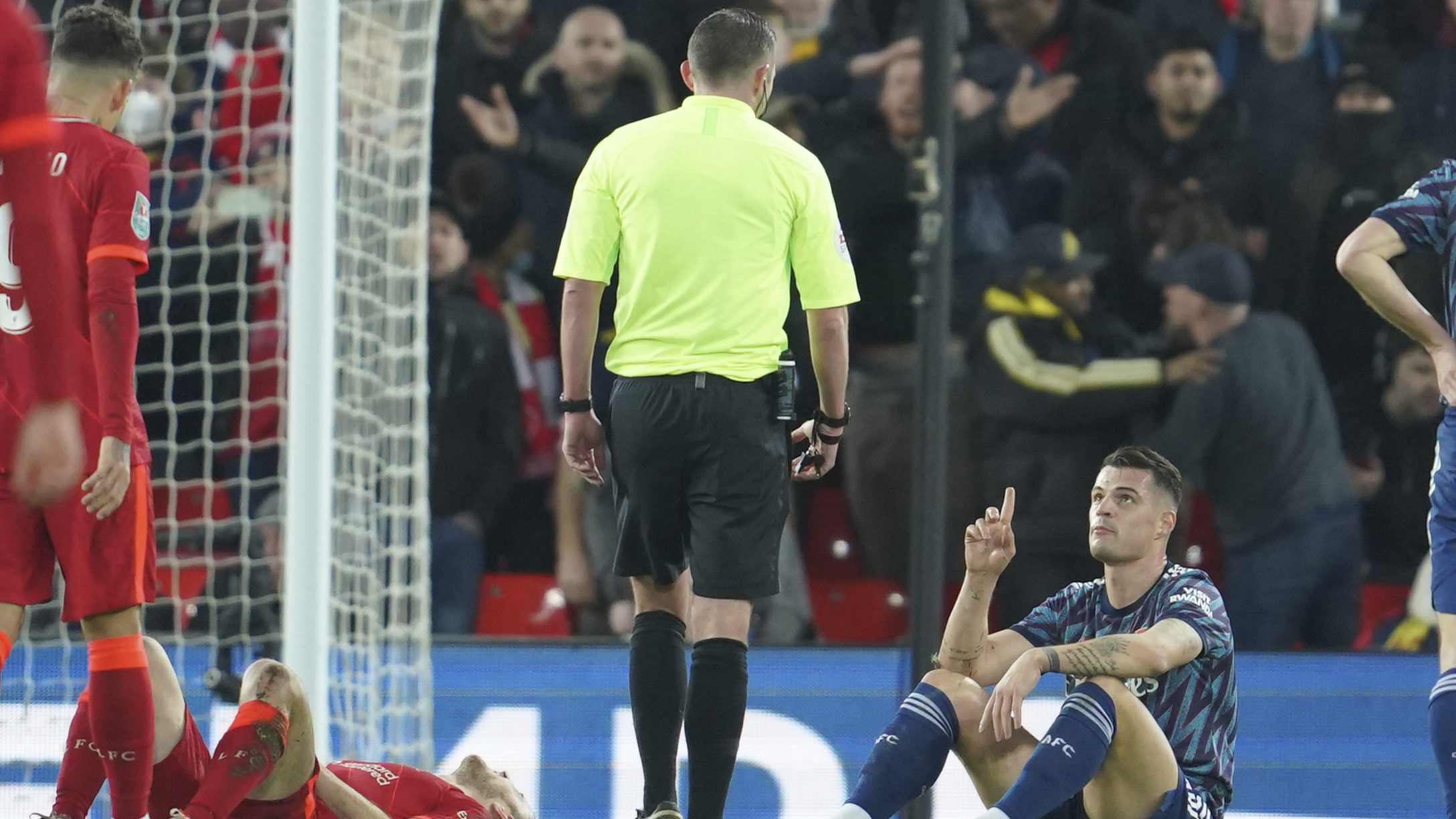 If Granit Xhaka getting sent off came as no real surprise, Arsenal holding out with 10 men at Anfield certainly was a shock.

Liverpool failed to take advantage of Xhaka’s 24th-minute red card for a chest-high lunge on Diogo Jota and was held to a 0-0 draw by Arsenal in the first leg of the English League Cup semifinals on Thursday.

With star forwards Mohamed Salah and Sadio Mane at the African Cup of Nations, Liverpool lacked a cutting edge up front against an already-depleted Arsenal team that lost two more players — Cedric Soares and Bukayo Saka — to injury during the game.

Arsenal manager Mikel Arteta was looking for a reaction after a humbling loss to second-tier Nottingham Forest in the third round of the FA Cup on Sunday and he got it with some obdurate defending, with center backs Ben White and Gabriel particularly impressive.

“There is so much fight in this team,” White said. “It’s hard enough to come here with 11 men and to get one sent off is not easy. Absolutely superb from everyone.”

His job was made much tougher by Xhaka, the hot-headed Switzerland midfielder who has now collected five red cards since joining Arsenal in 2016. No other Premier League player has so many in that period.

Xhaka was chasing back after Jota, who was attempting to run onto a long ball by Andrew Robertson, when he stuck out his left leg and smashed it into the chest of the Portugal international. Jota would have been through on goal and the referee went straight to his back pocket to show the red card.

It was Xhaka’s second red card of the season — the other was in a 5-0 loss at Manchester City in the Premier League when Arsenal’s defense proceeded to fold. Not this time.

Liverpool, which beat Arsenal 4-0 in the league at Anfield this season and had previously scored 43 goals in 15 games against the London club under Jurgen Klopp, barely called Arsenal goalkeeper Aaron Ramsdale into action until the final frantic minutes.

Takumi Minamino wasted the biggest chance for Liverpool, slicing his shot over the crossbar with the goal at his mercy in the 89th minute after Ramsdale flapped at a cross from the right.

Liverpool might have had 78% possession but managed only one shot on target, and that came in second-half stoppage time.

“I think we showed great fight, determination, attitude, brotherhood,” Arteta said. “We played the game we had to play. It’s not our game but we had to play it.”

The winner of this semifinal will meet Chelsea in the title match at Wembley Stadium next month, and the second leg is at Arsenal’s Emirates Stadium next week.

Mane and Salah will again be missing, though Arsenal’s absentee list is even longer at the moment heading into Sunday’s North London derby against Tottenham in the league.

Arteta ended up deploying Saka and Gabriel Martinelli as center midfielders for much of the game after Xhaka’s sending-off.