OWEN SOUND, Ontario — Canada has a special relationship with hockey, well documented through the years. Cheering for the (doomed) Maple Leafs is a time-honoured tradition, yet local hockey may leave an even more indelible imprint on our culture, memories, and people.

Coming off a season which saw the Owen Sound Attack win 30 games, make the playoffs, and eventually bow out in hard fought ‘Game 7’ against the Flint Firebirds, there is much to reflect on for local fans.

Among these are Karen Ransom and her son. Steven, 32 years old, has Down Syndrome, and does not let anything stop him from cheering on “his boys” at home games.  His enthusiasm has garnered him ‘Super Fan’ status in the eyes of many over the twelve years the pair have had season tickets. Rooting for the home team has been a bonding experience for the Ransoms. It has also created an unexpected community bond. “Just last week, I was in a restaurant, and somebody recognized me as ‘Steven’s mom!’” Karen laughs.  “Hockey has brought us together. People know Steven, accept him, welcome him. The people here make it feel like home.”

Karen admits that attendance at the games was happenstance, initially. In high school Bobby Ryan visited their class and signed a picture for Steven that hangs on his wall today. “That was the start of Steven being interested in hockey,” muses Karen.  Subsequently, they were gifted their first pair of tickets by Ray McKelvie, Business Manager for the Attack.  “We attended their first game and Steven loved it. We went a few more times that year and then I won the 50-50 draw one night. I decided I was playing with house money, so I bought season tickets with the winnings. We’ve been going ever since!”

Karen admits that she has grown very fond of the team herself, and the community connection.  “I used to say that I go for the popcorn and Steven goes for the hockey but now I go for the game, too.  Steven has always liked the popcorn too!”

Among the numerous memorable experiences, a few stand out for Karen.  “Meeting Mark Woolley (current captain) in the playoffs last year. Steven was just beaming.  Years ago, Marcus Carroll (former captain) picked Steven out of a crowd, remembered him by name, and gave him a bear hug; I could hardly believe he remembered us!  The entire trip down to Mississauga to watch Game 7 in 2011 when they won the OHL Championship. In Shelburne you could see Attack jerseys and signs everywhere!”  A bit sheepishly, Karen adds, “Once, Steven accidentally signed one of the prizes for a raffle. Somewhere there is a one-of-a-kind Attack jersey with an extra name on it!”

There is more than surface level mirth from happy memories, though.  Steven is an active volunteer with the Lions Club, he nearly always sells out of programs.  “What the community has given us, Steven is learning to give back,” says Karen appreciatively.

Steven sums everything up perfectly.  “It’s just the best … those are my boys!”

A hockey team and its local community.  A profound connection, the warp and weft comprising the tapestry of small-town Canada. 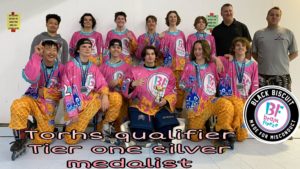 In their inaugural season of competitive roller hockey, Team Black Biscuit Brain Freeze 16U has… 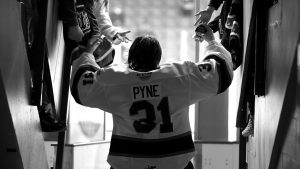 Kelton Pyne is a grade 11 student at Greenall High School in Balgonie, Sk. is…