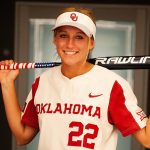 It’s easy to understand why Oklahoma recruit Jordyn Bahl is considered the No. 1 player in the country for her class. The 2019-20 Gatorade Nebraska Softball Player of the Year posted staggering numbers as a pitcher and a hitter last fall as she led Papillion-La Vista to an undefeated season and a state championship.