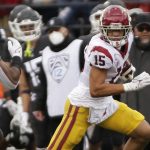 LOS ANGELES (AP) — Drake London has been the nation’s most productive receiver in the first month of the college football season, which means the Southern California star is getting hit a whole lot more than the average wideout. But there’s nothing average about London, the 6-foot-5 former Trojans basketball player whose sole concentration on […]