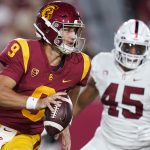 LOS ANGELES (AP) — The last time Southern California played at home, there were so few fans left at the end of a 42-28 loss to Stanford that individual critiques could be heard as Clay Helton headed up the tunnel for what would be the last time as head coach. Whether the stands are full […] 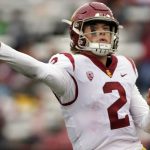 LOS ANGELES (AP) — The quarterback competition at Southern California might be over before it even started. Jaxson Dart did not practice Tuesday after the freshman sustained a knee injury in the Trojans’ 45-14 win at Washington State, while three-year starter Kedon Slovis took first-team reps after being knocked out of the game because of […]