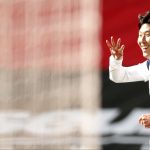 LONDON (AP) — No fans but no shortage of goals. There were 18 goals in the Premier League’s four games on Sunday — with Tottenham’s 5-2 victory over Southampton producing the most. Heung-min Son was rampant, scoring four in a league game for a first time — all assisted by Harry Kane, who got Tottenham’s […]