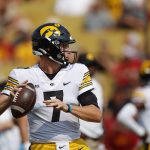 IOWA CITY, Iowa (AP) — A quick glance at the statistics would indicate Iowa’s Spencer Petras is an average Big Ten quarterback. One number pops out, though, and illustrates a major reason the fifth-ranked Hawkeyes (3-0) have won nine straight games. The second-year starter hasn’t thrown an interception since early in the second quarter of […]