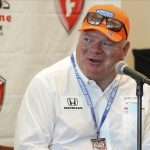 IndyCar opened the second week of March giddy to finally start its season. The coronavirus seemed so far away from the downtown streets of St. Petersburg and teams poured into the city eager to shake off six months of rust and race again. The NBA suspended its season just hours before IndyCar’s drivers had their track inspection.