OAHU, Hawaii (BVM) – Football in the state of Hawaii – the home of NFL quarterback Marcus Mariota and first-round pick Tua Tagovailoa – at the high school level is now played on both Fridays and Saturdays, instead of just Fridays.

According to one Hawaii lawmaker, it has nothing to do with a designed varying of schedules or a lack of usable venues, but a shortage of referees.

State Sen. Glenn Wakai introduced Senate Bill 2549 in February that would expand the second-degree assault law to include causing “bodily injury to any sports official in retaliation for or on account of the sport official’s performance of a duty at a sport event.”

Wakai introduced the measure after interacting with officials of the Hawaii High School Athletic Association (HHSAA) and hearing many of them are tired of being verbally, and even physically, assaulted by fans.

After unsuccessfully introducing the same measure back in 2016, a recent incident may prove Wakai’s point and fuel legislative changes regarding the treatment of sports officials.

A high school athlete was arrested at the 2020 HHSAA Wrestling State Championships at Blaisdell Arena in Honolulu after allegedly threatening a referee, grabbing his shirt and pushing down a security guard.

According to witnesses, Vitale Afoa, 18, of Leilehua was upset about losing his 285-pound preliminary round match due to penalties assessed by officials. While other matches ensued, Afoa approached the referee, grabbed his shirt and threatened him, witnesses said. A security guard, who tried to break up the conﬂict after a group of Afoa’s agitated friends and family moved from one mat to another, was allegedly knocked down by Afoa.

After being escorted out of the arena by HHSAA officials, Afoa and his family gathered outside on the concourse and were eventually met by a police officer. About ﬁve minutes later, two squad cars arrived and a group of officers handcuffed Afoa, who was still wearing the bottom half of his singlet with the top half pulled down.

Afoa was later charged with terroristic threatening and harassment after being released on bail.

“It just shows that we need to protect our officials and our administrators, and we need support from the whole community,” HHSAA executive director Chris Chun told the Honolulu Star-Advertiser of the incident.

Increased protection of sports officials might be forthcoming sooner than later.

Just to put that in perspective, third-degree assault against most victims is a misdemeanor punishable by up to a year in jail.

Introduced by Oahu Sen. Donovan Dela Cruz, the vote was unanimously approved. The measure will go back to the full Senate for another floor vote. No hearings have been scheduled for Senate Bill 2549, which was referred to the Judiciary Committee on Jan. 23.

The proposed measure might not prevent an incident like the one at the Wrestling State Championships, but it might cause athletes, parents and fans to think twice about heckling officials. At the very least, it might result in an increase in referees.

“This is the way to get more officials. They need to feel that they are a protected class,” Chun said. 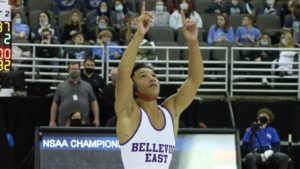 Garrett Grice has wrestled in Nebraska his whole life. Now the state’s top wrestler is…