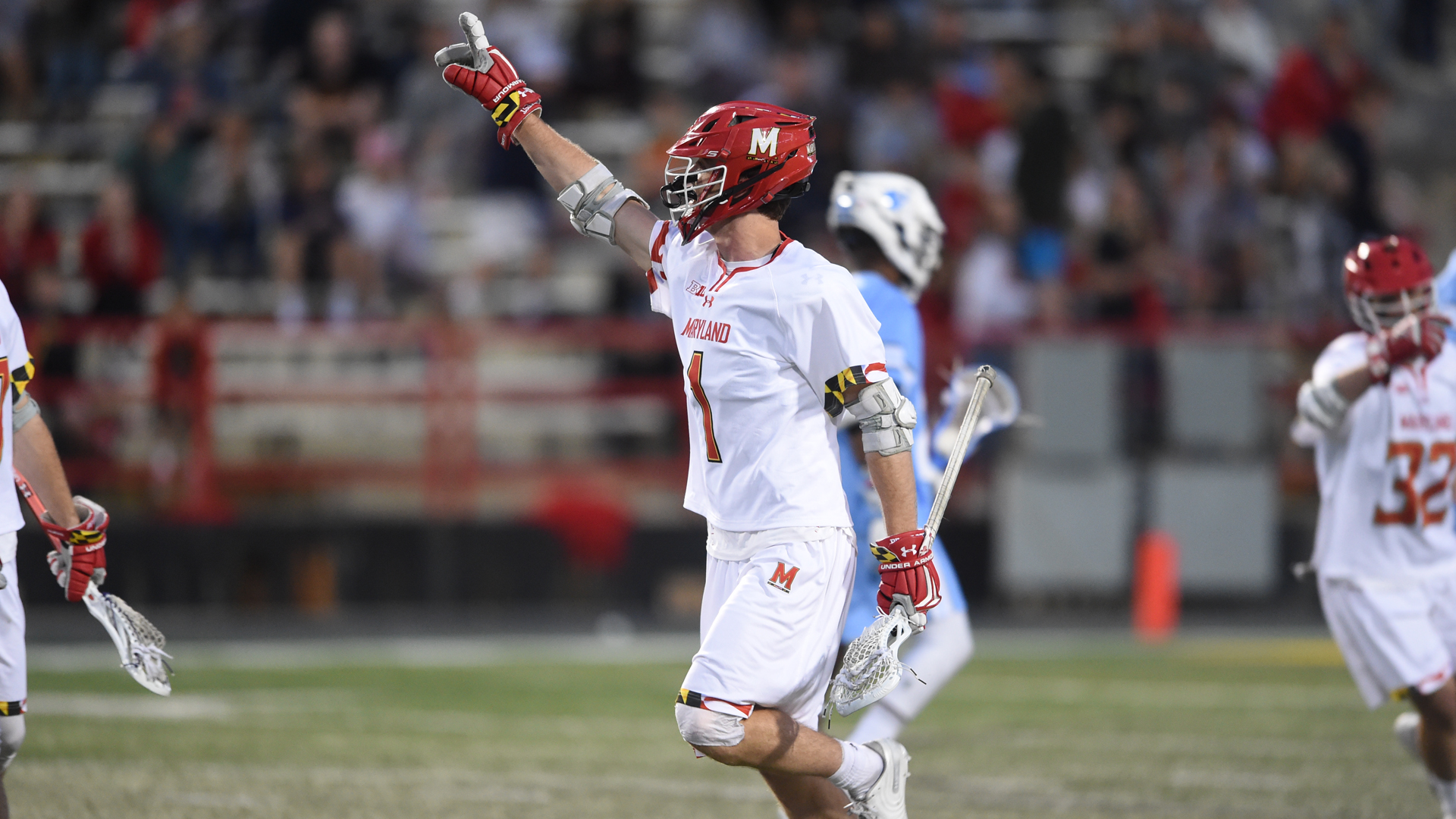 Maryland lacrosse star Jared Bernhardt will use his final year of eligibility to play football for the first time in five years at Ferris State in part to honor his late father. (Photo: University of Maryland Athletics)

For younger fans, Jordan’s head-scratching decision to leave his spot atop the NBA mountaintop for MLB’s minor leagues can be seen as a superstar fed up with the expectations of being “Air Jordan” or the grind of three consecutive championships. While both factors certainly contributed to Jordan’s retirement in Oct. 1993, it was the tragic death of his father, James, just months prior that ultimately brought him back to his first love: baseball.

Jordan said his final conversation with his beloved father — who was murdered in the summer of 1993 — was about whether or not he should stop playing basketball to pursue a different career path.

Enter Jared Bernhardt, another athlete seemingly at the very top of his game.

The University of Maryland All-American was a finalist for the Tewaaraton Award, lacrosse’s version of the Heisman Trophy, in 2019 after becoming the third player in school history to score at least 50 goals (51) in a season. Bernhardt finished a coronavirus-shortened season this spring with 29 points on 20 goals and nine assists for the Terrapins (5-1). He was on pace for 43 goals in the regular season, which would have given him 154 for his career and left him just one goal from the program record of 155.

Despite his success with Maryland lacrosse, Bernhardt will use his fifth year of eligibility to play football at NCAA Division II Ferris State University in the fall.

Bernhardt originally notified the Terps’ staff of his decision before the season back in August, just two months after his father, Jim, died of cancer. He was a lacrosse and football star at Hofstra, later an advisor to the Houston Texans and Jared’s first coach. Jared told MLive that the two talked at length about a return to football before his father’s death.

In a recent digital interview with the NCAA, Jared talked about his passion for football and his father’s influence.

“Football was the first sport I actually played, and my dad was the coach,” Jared told the NCAA. “I’ve always had the passion for football. I’ve always loved it.”

Jared hasn’t played football since he was a senior quarterback in Lake Brantley, Fla., but his collegiate lacrosse success was preceded by a productive prep career on the gridiron. During his junior and senior seasons, Jared totaled more than 4,000 all-purpose yards and 30 touchdowns running the triple option, the foundation of Ferris State’s offense. He rushed for 1,457 yards and 12 touchdowns while passing for 751 yards and another six scores in 11 games as a senior for a Patriots offense that averaged 486 yards per game.

Ferris State head coach Tony Annese called Jared an outstanding athlete “who will have an opportunity to play quarterback in our system.”

“He’s just a multidimensional athlete, and my philosophy has always been that if you’re an athlete, you can perform on the football field,” Annese said when Ferris State announced Jared’s addition to the program. “Beyond that, I looked at his high school film and thought, ‘My goodness gracious, this kid is a playmaker.’ So he’s an elite athlete who was obviously successful there at Maryland in lacrosse. So immediately when we got an email from him inquiring about any interest we might have and his desire to play football, we got excited and pursued him.”

Going from a Division I lacrosse powerhouse that won a national championship in 2017 to a Division II football program might leave some confused, much like Jordan’s decision to pursue baseball in the midst of his basketball prime, but Ferris State is no slouch.

Over the last six seasons, the Bulldogs have compiled a 72-9 overall record, claimed four conference championships, posted four unbeaten regular seasons, captured three regional titles and reached the national quarterfinals four times. Ferris State is one of only four teams in all of college football at any NCAA level to win 11 games each of the last six years along with Alabama, Ohio State and North Dakota State. FSU is also the only DII team in the country to reach the national quarterfinals for four consecutive years and the Bulldogs’ six-straight playoff appearances is the second-longest streak in the nation.

Ferris State football might not have the allure of DI athletics, but its winning pedigree is something any athlete would want to be a part of. At the very least, Jared will once again be able to competitively play the first sport his late father ever taught him.

“I’ve always loved it (football). It never really went away, but being able to have the opportunity that I didn’t think I would have, to be able to maybe go play somewhere, I never really thought about it,” Jared told the NCAA. “I just played. And then when the opportunity came, it was kind of a very surreal feeling. Obviously choosing lacrosse, it’s definitely been in the back of my mind during my years at Maryland.”