To start with, the former series champion spent four years driving the No. 10 car Rosenqvist took to victory lane for the first time at Road America last week, ending Dixon’s streak of three straight wins to start the season. Then consider the 45-year-old Kanaan sees the 39-year-old Dixon in the gym almost every day, each pushing each other to stay fit — and young.

So yes, as Kanaan hops back into his own car for A.J. Foyt Racing for this weekend’s doubleheader at Iowa Speedway, few have the same appreciation for the way Ganassi’s drivers have dominated a season that has been unlike any other.

“I’m so happy for them,” Kanaan said. “Scott, he can’t impress me any more. I lived with the guy. We race together. He was my teammate. I see him every day at the gym. The thing about Scott, people have to stop giving him chances because he doesn’t need any chances to win anyway. They’re shooting themselves in the foot. And you can just see it coming.”

That was the case last weekend in Wisconsin. Graham Rahal was leading the opening race of that doubleheader when a problem with fueling knocked him from contention. Pole-sitter Josef Newgarden went to the lead in the closing laps, but the reigning series champion stalled while pitting and was shuffled back to 10th place.

Dixon went on to win his third straight race after triumphs at Texas and on the road course at Indianapolis.

“This is the way it works in all sports, I would say. There’s a lot of times things are rolling your way and you’re getting all the breaks and it’s great when that happens,” Newgarden said, “and when it doesn’t? You have to take the hits. Those guys have been strong. They’ve been in the fight. But it seems like we’ve been giving them a couple layups.”

It still takes Dixon, Rosenqvist and teammate Marcus Ericsson to turn those layups into points. All three have done it so far, with Ericsson running a season-best fourth in the second race of last weekend’s doubleheader.

“I think it’s pretty simple, man. I think all of us are very lucky to do what we do,” Dixon said. “I think this team, Chip is probably the most competitive person I know. To have that person leading from the top, showing that, I think it really filters through the whole team, the crew and everybody. I think it really lifts everybody up.”

By the time the second race concludes at Iowa on Saturday night, the series will have run five times in a 15-day span. So to give teams a break, IndyCar is changing its qualifying procedures for this weekend. All of it will take place Friday, with the first lap determining where drivers start in the opening race and the second lap where they start the second.

“I think it’s a good idea. We need that extra time,” team owner Bobby Rahal said Thursday. “If this opens things up a bit to give everybody the time if you need it, you’ve got it, that would be great. Especially a track like Iowa. I’m not saying you can start anywhere and win, but if you have a good-handling car on a hot race track you can come from behind.”

The heat index is expected to be well into the 90s when each race starts at 7:30 p.m. local time. To help drivers deal with the heat, IndyCar is trying out a new air-flow system at Iowa that is designed to channel hot, stagnant air out of the cockpit.

Fans were allowed last weekend in limited numbers and with strict testing and social-distancing requirements, and the same testing procedures will be in place at Iowa. But there is a big difference: Road America is a sprawling road course set on 640 acres of land, whereas the track just outside of Des Moines is among the shortest in the series.

“We’d rather have the fans in a normal setting really get their fill of up-close access to the teams and drivers and cars,” Miles said, “but under the circumstances that doesn’t make sense. I thought the fans were very understanding and on board with the procedures we felt were necessary. We thought the turnout was great.”

The president of the Iowa 250s, Michael Montri, said Thursday that he expects about 5,000 fans each night.

“I had the opportunity to be there and help with their planning at Road America,” he said, “and I thought it went really well, and we’re looking for similar results here as far as when anyone sets foot on the grounds.” 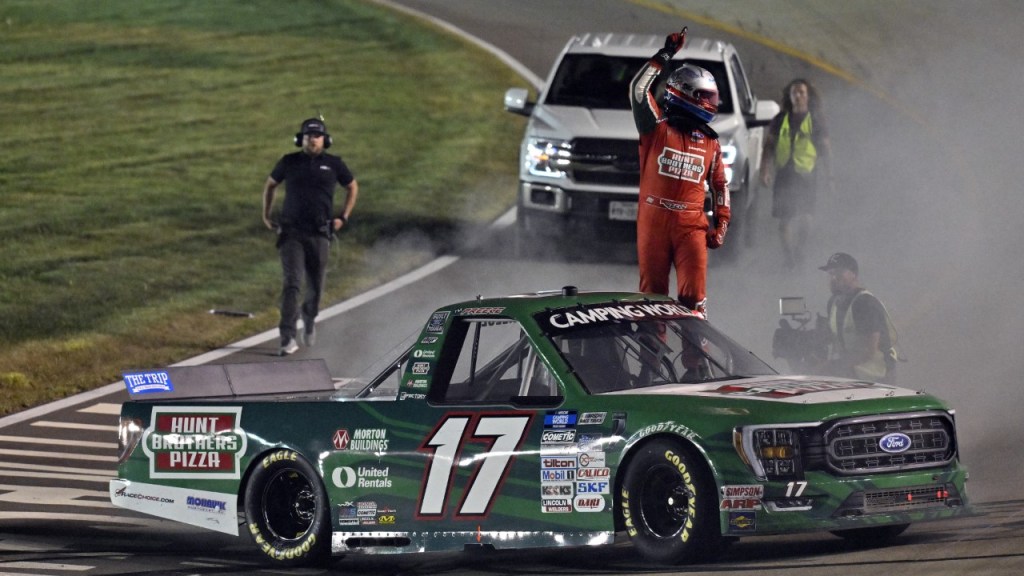 His tires chattering with age over the final few laps, Ryan Preece held off charging…