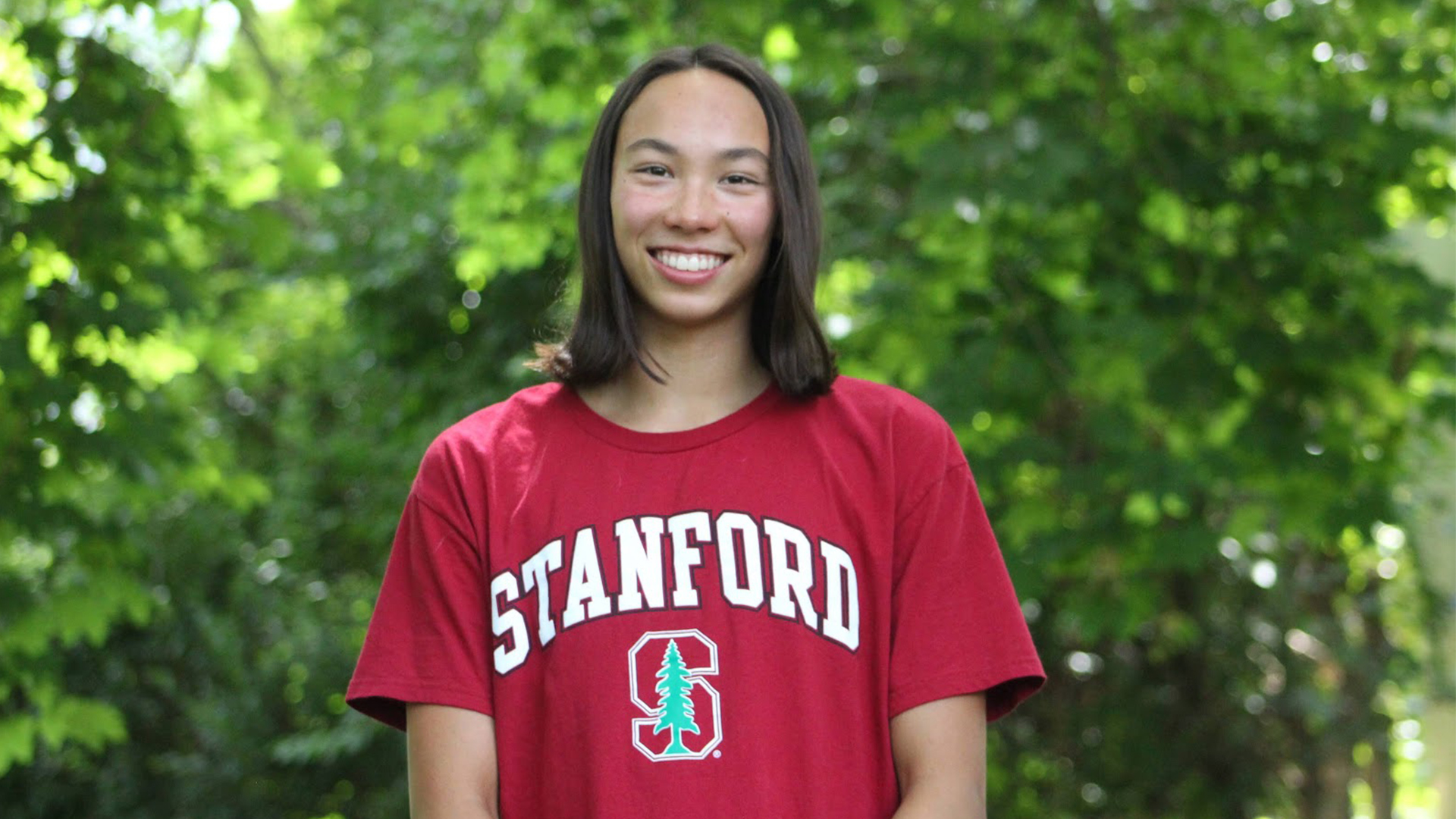 Victoria “Torri” Huske has become one of the best prep sprint swimmers in the country. After breaking national records in the 100-yard fly as a junior, the rising senior committed to Stanford University’s women’s swimming and diving team for 2021. (Photo: Hannah Knittig)

ARLINGTON, Va. (BVM) — One of the fastest high school swimmers ever, regardless of gender, has made her decision for the next level. Victoria “Torri” Huske of Yorktown High School and the Arlington Aquatic Center announced in July her decision to continue her swimming career for the Stanford Cardinal upon graduation.

“Stanford does a great job at fostering inclusivity and I immediately felt welcomed when I visited,” Huske said. “I felt like Stanford had everything I was looking for — outstanding academics, a team culture which promotes unity, and great teammates. (Stanford director of women’s swimming) Greg (Meehan) and (associate head coach) Tracy (Slusser) set a great tone for the team that really helps to create a unit full of support. I cannot wait to be a part of the tradition that is Stanford swim and dive.”

The rising senior has become the face of girls prep swimming in Washington, D.C. over the past few years, shattering records while growing her list of achievements.

“I was never really a prodigy as a young kid,” Huske said. “I’ve just been constantly improving and getting better. There are a lot of big swimmers in this area and a lot of big names that have been circulating, so I never felt like the attention has been on me. I just felt like I was improving over the years.”

Huske has become a household name of sorts in swimming circles. A record, many times one she already holds, seemingly gets broken every time Huske hits the water. As a freshman at Yorktown, Huske burst onto the scene by becoming one of the most dominant swimmers in the Metropolitan Washington area, winning the Washington Post’s MET Swimmer of the Year.

As a sophomore in 2019, Huske’s name became more recognized when she won four events and broke three regional records at the Northern Virginia 6A regionals. At the meet, Huske broke records for the 200-yard individual medley, the 100-yard freestyle and the 200-yard medley relay while also helping Yorktown win the 400-yard free relay.

Although her finishes at regionals put the rest of the field on notice, it was her performance at the 2019 state championships that set off alarm bells across the country. In the 100-yard fly, Huske would finish with a time of 51.29 seconds, breaking the national public school record and the overall high school record for the event.

“I was really excited,” Huske said of the feat. “Mostly I was just excited I was improving time. I feel like that’s always my No. 1 goal. (I’m) not necessarily measuring myself as to what records I break, but that I’m still improving. But overall I was really excited.”

For her accomplishments, Huske was recognized again as the Washington Post’s MET Swimmer of the Year while also earning herself first team All-MET honors.

At the 2019 National Championships that summer, Huske was again a record-breaker. In the 100-yard fly, Huske finished fourth, but her time of 57.80 broke the previous record for the 15-16 age division of 57.93 set by Mary T. Meagher in 1981. With a 10th place finish in the 100-yard freestyle, Huske qualified to swim both the 50 meters and 100m fly and the 100m freestyle in the FINA Junior World Championships in Budapest.

“It’s an honor,” Huske said. “It’s always great to represent your country and to feel you’re representing it well.”

Swimming for Team USA, Huske won individual gold medals in 50m fly (25.70) and the 100m fly (57.71) while also earning a silver medal in the 100m freestyle (54.52). Huske also contributed to gold medal wins for the U.S. in the 400m freestyle relay, the 400m medley relay and the 400m mixed medley relay which the team finished in record-breaking time. Receiving her gold medal with her teammates has been one of the swimmer’s favorite moments in the sport.

“I got to stand on the podium while the national anthem played,” Huske said. “It was an incredible feeling and I was so proud to stand with my teammates at that moment.”

Huske’s 2020 season has gone much of the same way for the young swimmer. During the Virginia Class 6A state championships, Huske broke state records for the 50-yard freestyle and the 100-yard butterfly with times of 21.83 seconds and 50.69 seconds, respectively. Her finishes helped the junior once again garner first team All-MET honors from the Washington Post.

Huske knows that her success couldn’t have been achieved without those people around her who have worked to help her reach her goals. From parents to coaches to teammates, Huske had many people she wanted to thank for their help on her journey.

“I’m so fortunate to have so many people that have helped me along my way,” Huske said. “I wouldn’t be where I am today without these encouraging and selfless people. I’m so thankful for my stroke coaches in the past, people who’ve given me rides, people who helped me gain access to pools, and of course, my teammates. My teammates have pushed me to excel and I’m incredibly grateful for them and all they’ve done for me.”

Huske should be able to contribute early and often to the Cardinal. While Stanford has dominated in nearly every event in the pool, they do have a sort of weak spot in what are called the “sprint” swims, Huske’s specialty. The Cardinal have not had a 100 butterflier break 52 seconds in the event since 2018 and based on her high school times in the event, Huske’s already close to breaking Stanford’s program record of 50.38. Huske of course would like to contribute to the team early, but wants to be a good teammate first.

“Hopefully I’ll be able to score points for the team and maybe be on a relay if I’m able to help out,” Huske said. “I just want to be a supportive teammate and contribute to the positivity of the team culture.”

While she awaits the beginning of her collegiate career, Huske has her eyes set on another prize, the Olympics. With the Olympic games being delayed until summer 2021, Huske will have an opportunity to earn a spot on Team USA’s squad. Huske qualified for six events at next summer’s Olympic Trials including the 100m butterfly, 100m freestyle, 200m butterfly, 200m freestyle, 200m individual medley, and the 50m freestyle. To be able to even participate in the trials is a big honor for Huske and she understands the significance of the moment.

Although her Olympic future may not be set in stone yet, Huske’s collegiate future is. While Stanford hardly needs anymore help in the pool, they certainly won’t mind adding a record-breaker like Huske. With her skills, Huske can certainly help the Cardinal continue their dominance in the future.

Rylie Merchant, 9, is one of Georgia’s best swimmers in her...
Verona Wildcats finish sixth at state
Malone’s Quentin earns G-MAC Co-Women’s Swimmer of the Year h...
Chasing Ledecky: Leah Smith keeps coming after US star
Brunsky’s training pays off with state championship
Edgewood girls swimming makes it six in a row at state
Nevada swimming and diving makes a splash
The Swim Melbourne Mahi swimmers and divers are making a name for...
Nuhfer’s perseverance continues as she heads to swim at Akron
First Colonial Patriots swim to second VHSL state title
Schaumburg’s Mollin ready to pursue Olympic dreams
Magicians are looking to finish a magical season