OLD TAPPAN, N.J. — Old Tappan is a great place to grow up for aspiring golfers, with a 9-hole course right in town and a high school team with a winning history. NVOT varsity golf Coach Tom Quinn credits local golf pro Doug Meeks, himself an NVOT alum and former All-American college golfer, with always looking out for the young players coming up and in turn helping develop the high school program. The NVOT team, led by Quinn, has won three consecutive state titles from 2016-2018 and three consecutive state sectional titles in the last three years.

Next year’s golf team will be young by default, as there will be no rising seniors. The only two remaining team members are Justin Torres of Northvale and Tim Clune of OT. But even though 2020 may have been a missed year for high school golf, there is much to look forward to for two young players from OT. Meeks calls them two “upcoming golfers who are going to make Old Tappan great.”

In early March, Tim (“Timmy”) Clune was thrilled to find out he had made the NVOT varsity golf team as a Freshman, only to discover out that the season would be cancelled along with the rest of the school year. Clune had been looking forward to joining friend and neighbor Max Cataldo, and the rest of the team. The upperclassmen on the team had been very supportive of the freshman, and Clune was eager to learn from them as well as Coach Quinn, whom he explains has a great sense of humor and knows so much about golf.

Clune came up through the Old Tappan system, taking lessons with local pro Doug Meeks since he was five years old. He has developed an enviable nine-hole average of 38-43 and broken 80 playing 18 holes on several occasions. One of his golfing highlights thus far has been playing on the Pioneer Tour, a competitive youth golf tour with tournaments on courses throughout Bergen County. His favorite golf memory however, is when he bested his father in a round of golf for the first time, two years ago.

Coach Quinn reflected that “Tim would have been a main part of the varsity team this season and will have to be even more of a main player next year” as the team rebuilds. Clune, in turn, is ready to step up. Golf is a great sport for confidence and he enjoys how a game that is so individual also offers a different take on what it means to be part of a team. Clune’s dream is to play golf in college.

In addition to golf, Clune is a multisport athlete and an honor roll student. He also plays football and basketball, and enjoys surfing and fishing in his free time.

Having just graduated from CDW in the spring, 14-year-old Jun Chun is looking to make an impact when he arrives at NVOT in September. Chun fell in love with the challenge of learning the golf swing when his father took him to the course for the first time. He says it wasn’t until he was about nine years old, however, that he really got serious about the game and got into more tournament play.

Chun, like Clune, loved playing on the Pioneer Tour. The two boys met on the tour and struck up a friendship. They frequently played rounds together at the Old Tappan Golf Course after school for practice. As Clune developed more speed on the ball, he started playing in the NJPGA (NJ Professional Golf Assoc.) and AJGA (American Junior Golf Assoc.) tours. His best tournament round ever was in last year’s NJPGA Jon Pritsch Memorial Cup, a Ryder Cup-style tournament where 12 of the best New Jersey junior golfers aged 11-18 tee off against Team Philadelphia. Chun recalls being very nervous for the Pritsch tournament, but always enjoying the tough mental game required of him. “I like the pressure and I like the grind,” he said, adding, “Playing a good round is one of the best feelings.” In 2019, Chun came in 4th in NJPGA Boys’ Player of the Year points.

His impressive golf resume has already gotten the attention of Coach Quinn who said, “He is as good as the best players I’ve coached and we can’t wait to have him” at NVOT. For the future, Chun’s goals include being ranked highly in the all-American Amateur Golf Assoc. rankings and being a good player, teammate, and a leader on the high school team. 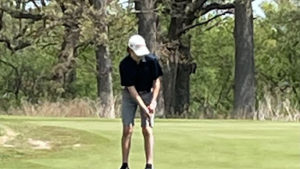