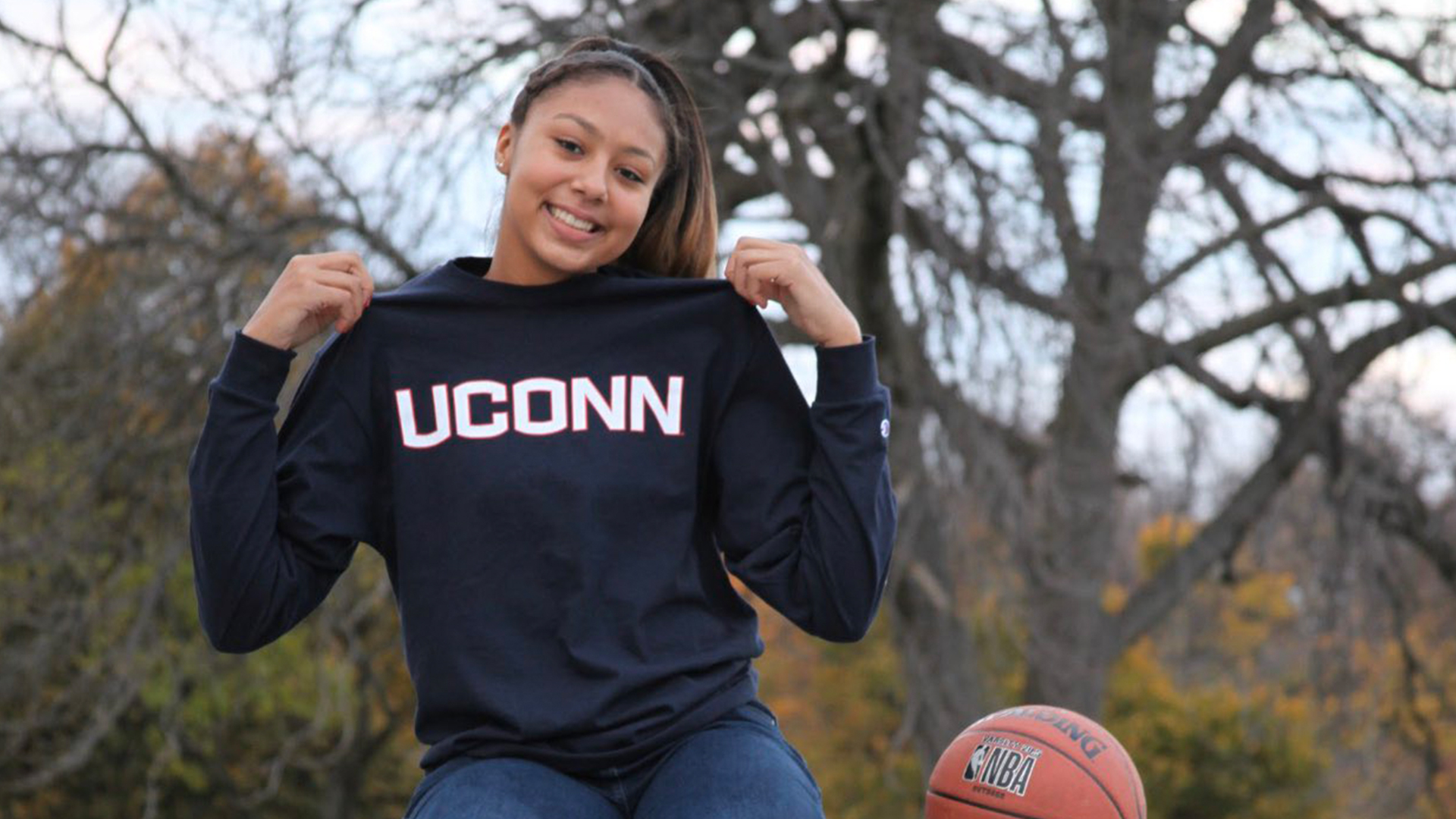 Amari DeBerry is the No. 5-ranked girls basketball player in the Class of 2021 and committed to University of Connecticut in Nov. 2019. (Courtesy: @amari_deberry/Twitter)

WILLIAMSVILLE, N.Y. (BVM) — Amari DeBerry has been on the radar for most of the top college basketball programs from the moment she stepped on the court as a freshman.

DeBerry’s size and skillset are a rare combination. The 6-foot-5 forward’s physical makeup, along with a high-level basketball IQ, put DeBerry in elite territory. The Williamsville South senior has played great in the post, but it isn’t the only part of her game that she’s been working.

“I think because of my height and the league I play in, the post is really where I do well,” DeBerry said. “I’ve been working on moves facing the basket, so kind of expanding to just a five from like a four. I need to always work on everything, just get better at everything I can.”

DeBerry, ESPN’s No. 5-ranked player for the Class of 2021, committed to the University of Connecticut last November but hasn’t signed her letter of intent. She attributed her connection to the program as a main reason why she chose the Huskies.

“I’ve been in contact with them since the summer going into my freshman year,” DeBerry said. “It was just letters at that point, but then, up until I decided to commit to the school, I got really close with the coaches and I made friends with the girls going to play there, so I think it was that.

Super excited to announce my commitment to coach Auriemma and staff at the university of Connecticut #GoHuskies #Committed 💙💙💙 pic.twitter.com/cb6RaZQVF3

For many, UConn is the poster for women’s basketball. However, DeBerry admits she was a fan of another team growing up.

“Actually, Baylor was my favorite team growing up because of Brittney Griner and then I saw them play UConn and they kind of caught my eye,” DeBerry said. “So it kind of switched over from Baylor to UConn.”

Griner might be DeBerry’s favorite player, but the Williamsville native has made a connection with another WNBA star. Playing with the Philadelphia Belles in the Elite Youth Basketball League, Belles’ coach, Fran Burbidge, helped set DeBerry up with one of the team’s former players, Breanna Stewart.

“I was asked to go to one of those Rising BlueStar events (BlueStars is a group of the top 30 players in each class) and my coach, Fran, asked Breanna to also come,” DeBerry said. “So from there, he was like, ‘this is Amari, I want you to talk to her.’ So she was really sweet and we talked about UConn and basketball and family and friends involved with basketball. From there she just gave me her number and said if you need any advice or anything, or if you want to talk about anything, just like give her a call or a text. So that was very nice of her.”

With her senior season still in question due to the COVID-19 pandemic, DeBerry still has set some expectations for her final year of high school.

“With the way they are saying everythings supposed to go,” DeBerry said, “with like a 12-15 game season, just making sure we win all those games and just getting better and helping my teammates get better.

“I don’t know how they are going to run things for the McDonald’s All-American and Jordan Brand Classic, but if they are still doing those things, then that’s definitely something I want to be a part of.”