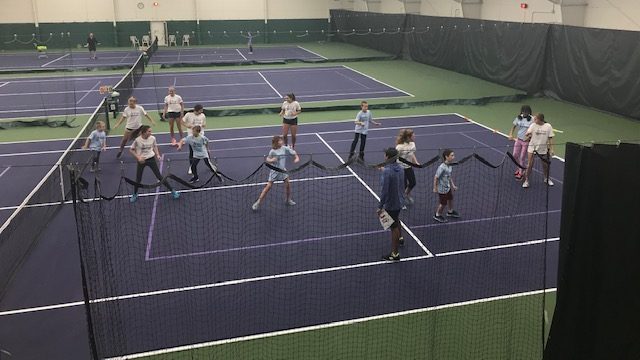 FORT WORTH, Texas (BVM) — Texas Christian University (TCU) freshman, Melina Kopischkie, is used to pushing herself. As a senior at Germantown High School (GHS) in Germantown, Wis., Kopischkie had the most No. 1 singles’ tennis wins in the program’s history. She also had the most wins for No. 2 singles and qualified for state — the only member of the varsity team to do so this past season.

However, though Kopischkie had a lot of success on the court, she also wanted to leave her mark off of it. Kopischkie learned about a program called ACEing Autism on a college tour in North Carolina her junior year, just as she was looking for a way to give back.

ACEing Autism is a program that enhances the lives of families and children with autism through tennis instruction with their peers. It was founded in 2008 by Richard Spurling and Dr. Shafali Jeste in Boston. Fifteen children attended that first session, and Spurling quickly saw positive results. He committed to developing and growing the program, which is now in over 30 states and counting.

With the help of her mother, Paula Kopischkie, her teammates, and some players from the boys varsity team, Melina started a chapter in Washington County, Wis.

The ACEing Autism clinic was held at Pleasant Valley Tennis & Fitness Club in Jackson, Wis., where an ACEing Autism representative held a training session before the first clinic. Two tennis pros also got involved to help lead the lessons.

“We had about 12 to 15 kids come through the program at various times,” Paula said. “In the end, a handful of kids stayed with us regularly and benefited from the physical activity, the social aspect and skill-building.”

Both Melina and Paula appreciated the experience.

“We really enjoyed meeting the children and their families,” Melina said. “Seeing the kids come excited to play tennis and spend time with us was really rewarding.”

Melina quickly realized she needed to roll with the mood of the group on any given day.

“Every day was different,” Melina explained. “Some days, all the kids would have good days and we just had fun. Other days, they were more symptomatic and there would be outbursts and frustration. We had some kids that really enjoyed the game and wanted to get better but would get frustrated easily if they weren’t playing well.”

Melina and Paula ran the program for two years. And while the children learned how to play tennis, Melina and the other volunteers learned about autism.

“It affects children in many different ways and severities,” Melina said. “The kids I met were all very sweet and dedicated. I was probably most surprised to see the drive they have to excel.”

The instructors quickly implemented a positive reward system to help their participants focus.

“After a few sessions, we started giving the kids a chance to earn points,” Melina said. “Once they earned a certain amount, they were able to give the volunteers challenges like push-ups and stuff. The kids thought this was the best and it became a regular part of our sessions.”

In addition to bringing the kids together, the volunteers also benefited.

“It definitely brought us closer together,” Melina added. “Often, we would stay after our session to have lunch together and lessons at the club.”

“In spring of this year, we were ready to hand the program over to a junior at GHS tennis and her mother,” Paula said. “However, Covid hit and we have not been able to resume.”

Melina is considering starting up a second program in Fort Worth, Texas. As a recently pledged member of the Phi Mu sorority, Melina will be looking to continue with community service.

Phi Mu encourages members who are community-minded to “lend a helping hand, bringing energy and purpose to community service and philanthropy.”

Currently playing club tennis, it has been a tough transition for Melina — as it has been for most college freshmen — during the pandemic.

“Academics and personally transitioning to my life on campus will be my primary focus for a bit,” Melina said.

For anyone looking to start a program, Paula recommends getting support.

“You will want a team of people to work with you and support your efforts,” Paula said. “The organization provides a lot of information and support, but success is really driven at the local level.”

For Melina — who was named the Washington County Tennis Player of the year last December — it was all about supporting the community while playing the sport she loves.