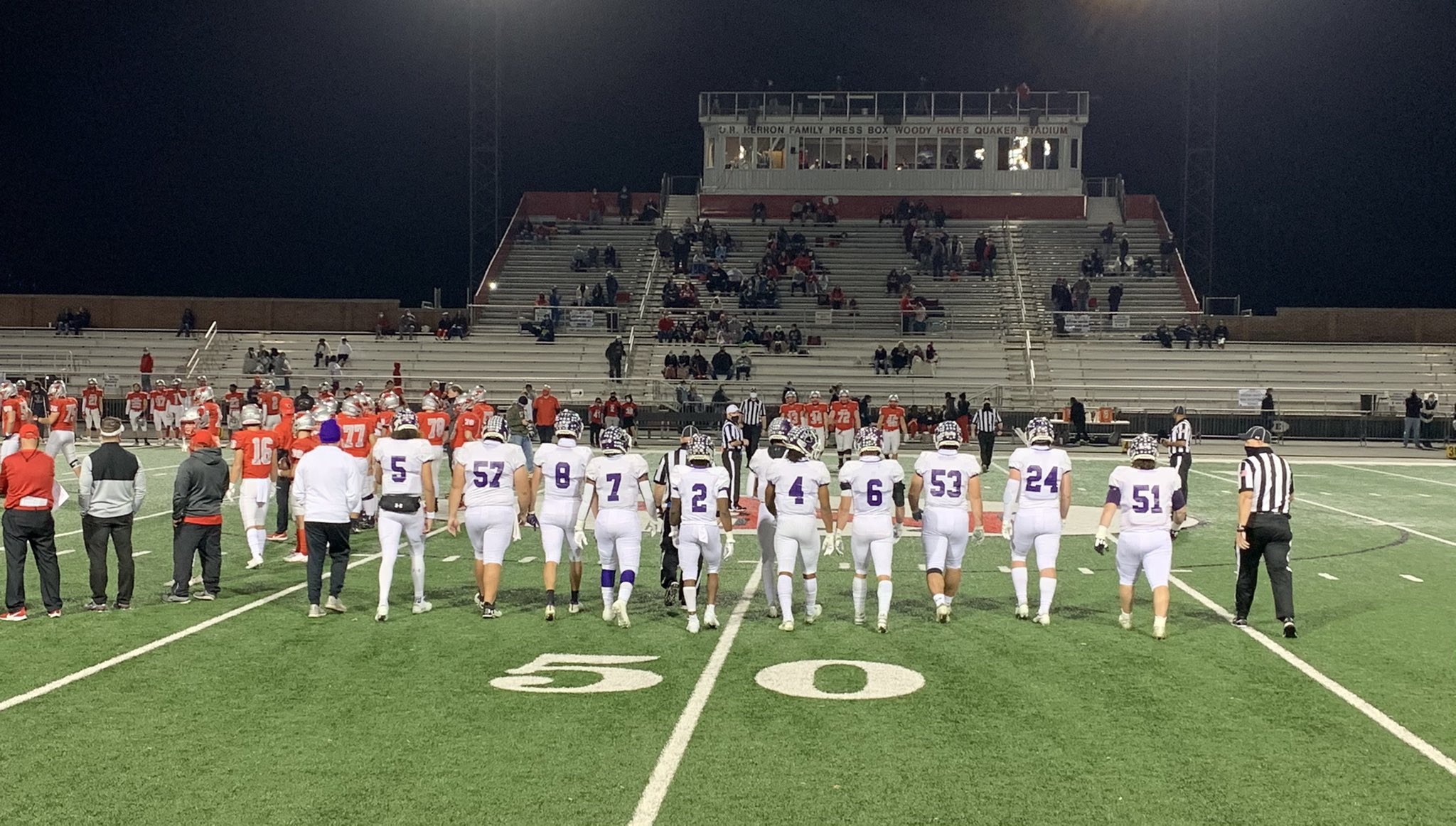 In a tightly contested game, the Pickerington Central Tigers ended up defeating the Mentor Cardinals 38-31 at Woody Hayes Quaker Stadium on Nov. 6, sending the Tigers to the state championship. (Courtesy: @PCtigerfootball/Twitter, Joe Koesters)

NEW PHILADELPHIA, Ohio (BVM) — After a crucial third down conversion, Pickerington Central rushed to the line and handed the ball off to Notre Dame commit, senior Lorenzo Styles, and he did the rest, breaking tackles on his way to a 70-yard touchdown run. This after Mentor had scored 21 unanswered points to tie the game.

The Tigers defeated the Cardinals 38-31 at Woody Hayes Quaker Stadium on Nov. 6. With the victory, they will have the chance to win back-to-back Division I state championships while trying to make it three out of the last four.

Behind a punishing running game, the Tigers amassed 322 yards rushing, good for seven yards per carry. Pickerington Central was led by senior quarterback Garner Wallace, who completed eight of nine passes for 116 yards and a touchdown, while rushing for 136 yards and a touchdown. Styles had 130 rushing yards and a catch for 25 yards.

The Cardinals were led by sophomore quarterback Jacob Snow, replacing starting quarterback, Ian Kipp, who missed the game. Snow passed for 193 yards with two touchdowns and an interception.

Senior running back Riley Coughlin led the ground game for the Cardinals with 65 yards and two touchdowns, while junior receiver Evan Harper had 94 receiving yards.

Shortly after, a long Mentor drive was stopped in the red zone on fourth down. Wallace broke free for a 92-yard touchdown run moments later, and the game looked like it was slipping away from Mentor.

But the Cardinals battled back, stifling the Pickerington Central offense and scoring 21 unanswered points. Coughlin punched in a two-yard touchdown run to bring the score to 21-7 going into the half.

After the half, Snow threw a touchdown to senior Hutch Baird on fourth down to make it 21-14. Mentor soon tied the game up on Coughlin’s second rushing touchdown of the game.

After a big third down conversion from the Tigers, Styles would break loose for his 70-yard touchdown, giving Pickerington Central a lead they would not relinquish. A late third quarter field goal from senior Andrew Smith brought the Cardinals within four going into the fourth quarter.

With 6:57 remaining in the game, Wallace found senior Gavin Edwards over the middle for a 31-yard touchdown to push the lead to 35-24.

But the Cardinals would come back again. Snow led a drive down the field and completed an 11-yard touchdown pass to junior Michael Norwood, bringing Mentor within four with five minutes remaining.

Pickerington Central put together a drive highlighted by a 37-yard completion to Max Lomonico to put the Tigers on the 17-yard line. The drive would stall out and the Cardinals would force a field goal. Senior Mitchell Vollmer converted the 25-yard field goal to push the lead to 38-31, giving Mentor the ball with 1:33 left on the clock and no timeouts.

The game would come down to a fourth down play, and junior Tyler Gillison would get a huge sack to end the game and put the Tigers into the state final.

St. Xavier was able to get a 12-10 victory over Springfield on Friday as well, setting up a battle between Ohio high school powerhouses for the state championship Nov. 13 at The Fortress-Obetz.