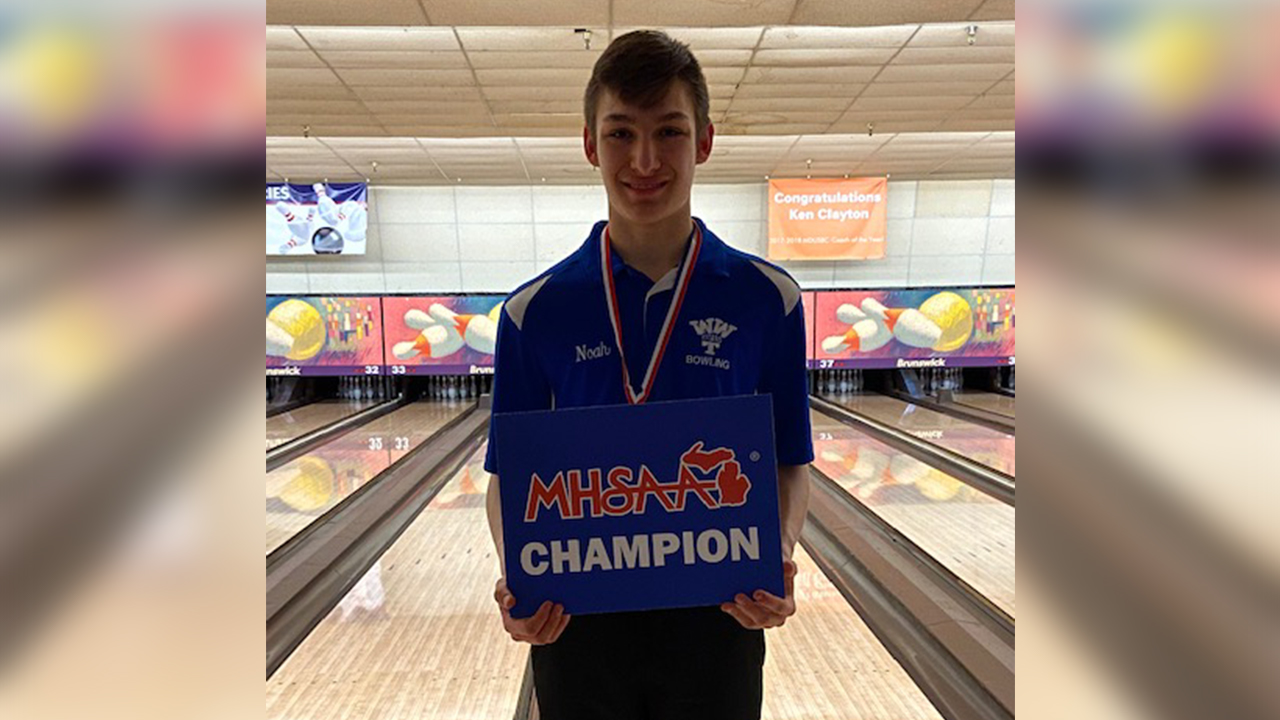 WARREN, Mich. (BVM) — For Warren Woods Tower High School student-athlete Noah Tafanelli, his journey towards becoming a state champion in boys bowling has been all about progress.

As a freshman, he didn’t qualify for the state tournament. The next year, as a sophomore, he made his first appearance in the Michigan High School Athletic Association’s (MHSAA) boys singles round.

Despite posting a strong two-game score in his match versus Zach Taylor of New Boston High School, Tafanelli was eliminated in the opening round, 471-422.

While he wanted a better outcome, the opportunity to learn the tournament’s format benefitted Tafanelli.

Tafanelli was named team captain for the 2019-2020 campaign. In the regular season, the Titans went 9-1, and Tafanelli rolled a 1,360 during qualifying to earn the top seed in the boys tournament.

An improvement in converting spares in challenging conditions was credited to Tafanelli’s progression throughout the season.

Entering the playoffs. Tafanelli’s primary goal was to go further in the championship. He would do more than that, posting a dominant quartet of matches in the 2020 tournament.

In the opening round, Tafanelli used scores of 215 and 224 to notch a 439-393 victory over Chelsea High School junior Luis Carvallo.

In the following match, he notched totals of 213 and 253 to eliminate Lowell High School senior Collin Clark, 466-366, in the semifinals.

While he admitted to battling nerves in the opening matches, Tafanelli got stronger as the tournament progressed.

The championship was the first for the Titans in boys bowling. For Tafanelli, the win vindicated his efforts.

“It just felt so good,” he said. “Everything I practice for and all the hours I spent just paid off.”

During the tournament, Tafanelli didn’t post a score below 213, and won all of his matches by at least 46 pins.

Tafanelli expressed that staying calm despite the tasks at hand paced his progression.

“Being able to stay calm, especially under pressure, ignore background noise and (focusing on) just throwing the best shots you can (really helped),” he said.

Tafanelli considers himself fortunate that the state tournament happened before the COVID-19 outbreak.

“I’m just very happy we had states before the outbreak,” he said. “States is very fun, and for me, I just didn’t want to miss it because of all the work and dedication I put into it.”

Tafanelli said his interest in bowling began at the age of 3. Bowling a 279 when he was 12 years old was when he realized his potential.

The sport could be considered a family affair for the Tafanellis. His dad, Michael, manages Bowl One Lanes in Troy, Mich. His cousin, Cassie McCarren, qualified for the state tournament four times in her career, and was named Ms. Bowling for Macomb County earlier this year.

Additionally, his sister, Kayla — a freshman on the Titans’ girls bowling team — finished third in the Division 2 girls tournament. She advanced to the semifinals before falling to eventual state champion, Megan Timm, of Flint Kearsley High School.

In the offseason, Noah was named a nominee for the state’s best boys bowler in the Detroit Free Press’s 2020 High School Athlete of the Year Awards. The ceremony honors more than 20 winners from multiple sports.

Noah advanced to the finalist round of the event — held virtually this year — and was selected as the winner of the award.

While just getting the honor itself would have been enough for Noah, an extra surprise awaited him once he found out he won.

The nominees for the award — as well as the winner — were announced by Professional Bowling Association (PBA) Hall of Famer Norm Duke, one of Noah’s bowling idols.

Another bowler that Noah considers a role model is Australia native Jason Belmonte, who competes in the PBA. He gained notoriety by becoming one of a limited group of bowlers who uses the two-handed technique when releasing their shot.

Noah notes awareness of a specific ball to use is a key skill to have in competition.

“Knowing what the ball itself can do and the layouts for the ball (is important),” he said. “It’s just that stuff to know when you’re heading into a tournament.”

While Noah’s ability during matches stands out, another trait has garnered him attention as well. He is often credited with helping his teammates progress, and expresses satisfaction about being someone they can turn to if they have questions.

“I love helping people out and that position means so much to me,” he said. “If my teammates need help or just need feedback, they know I would be there for them. Knowing that they would come to me, and having them develop just feels so good.”

Although bowling at the collegiate level is still growing, Noah hopes to follow in the footsteps of former teammate Cooper McMichael — who received a scholarship to play at Cleary University — and have the opportunity to continue at the next level.

As he enters his senior season, Noah, along with many student-athletes who compete in winter sports, hope to have an opportunity to return to action.

While Noah waits for a chance to compete, he has a clear focus for what he wants to accomplish in his senior year.

“Just to keep my grades up, keep doing the best I can in bowling, and keep practicing,” he said.