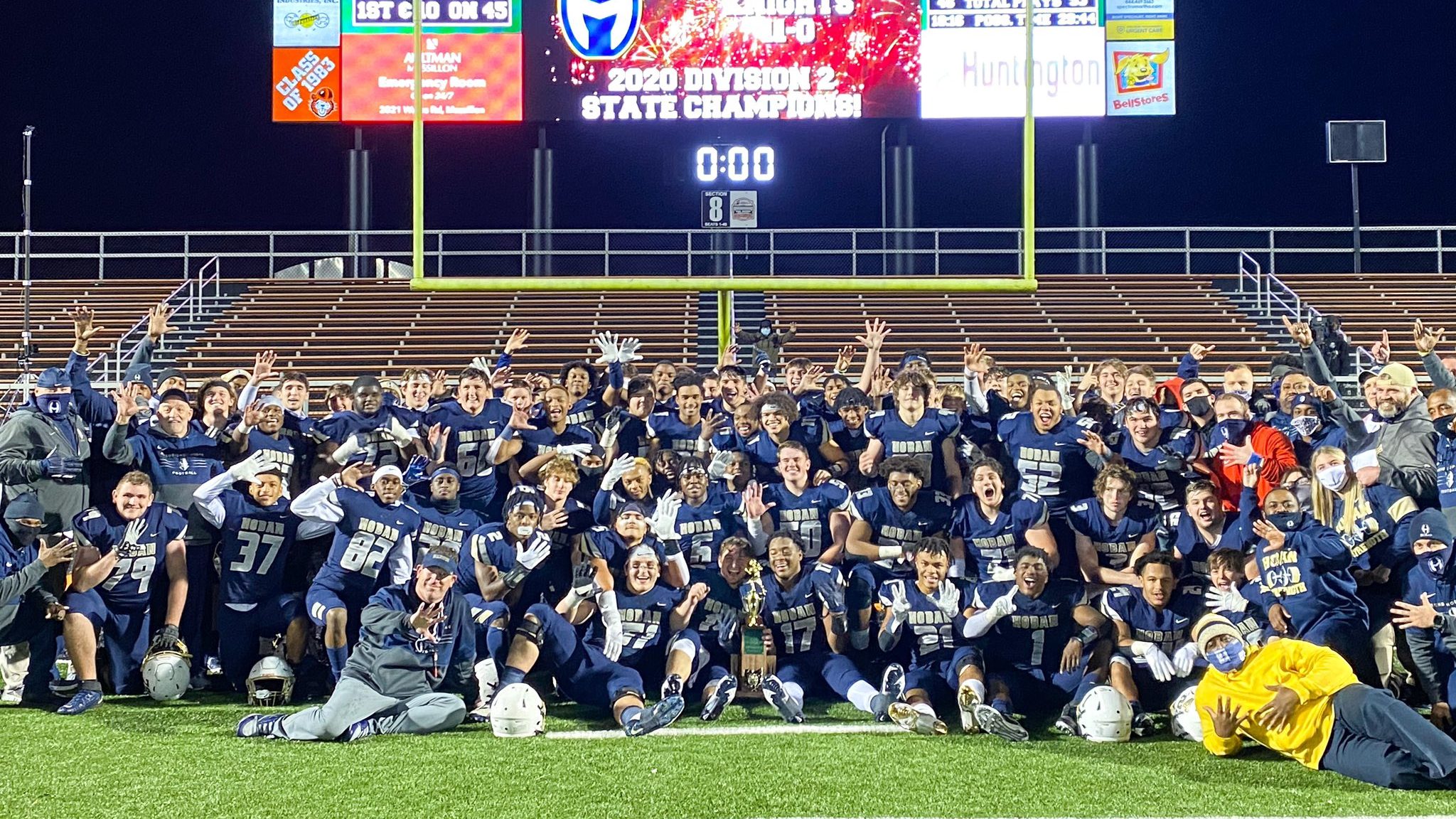 MASSILLON, Ohio (BVM) — After a seven-play drive to start the game, Akron Hoban would open up the scoring through a two-yard touchdown run from quarterback Shane Hamm that would give the Knights a lead they would not relinquish.

This was the second matchup between the two northeastern Ohio powerhouses in the state title game in the last three years. For Hoban, the 35-6 victory over the Massillon Washington Tigers is their fifth championship in six seasons, and caps off a perfect 11-0 campaign.

The Knights had their year ended last season by the Tigers in a 17-14 game in the regional finals.

Massillon Washington would go three-and-out on their first drive and give Hoban the ball back. The Knights drove back down the field to open up a 14-0 lead at the end of the first quarter, on an 11-yard touchdown pass from Hamm to receiver Kharion Davis.

The Tigers were forced to punt after a third down sack, but would get a big play as Austin Brawley would get an interception to set up Massillon on the Hoban 25-yard line.

The Massillon offense gave the ball right back to Hoban on an interception of quarterback Zach Catrone by Davis.

The Tiger defense would come up with another stop on a third-down sack to give the ball back to Catrone and the offense. Two 15-yard penalties by Hoban would extend the drive for Massillon at the end of the second quarter.

Catrone would find Caiden Woullard up the seam for a 16-yard touchdown, which cut the Hoban lead to 14-6 after a missed extra point heading into halftime.

Coming out after halftime, the Tigers got the ball first, but would be forced to punt it back to Hoban. On the ensuing Knights drive, Davis took a five-yard hitch route, and turned it into a 62-yard touchdown, opening up a 21-6 lead early in the third quarter.

Both teams would trade punts back and forth in their next possessions, including the first three-and-out forced by the Tiger defense.

After forcing another three-and-out of their own, Hoban would put together a punishing 10-play drive led by the ground game.

The drive ended with a 36-yard touchdown pass to Tyson Grimm from Hamm deep over the middle to put the Knights up 28-6 in the fourth quarter.

Davis would soon cause his second turnover of the game and put the Knights in positive field position again. Hamm would later find Chances Carter-Hill for a 12-yard touchdown to end the game and give Hoban their fifth state championship in six seasons.

Hamm completed nine of 10 passes for 172 yards and four touchdowns, while adding 25 yards and a touchdown on the ground, to lead the Knights to his third state championship in four years as a starter. Running back Victor Dawson gained 145 yards on the ground to lead the game.

Davis was the star of the game for the Knights, catching two passes for 73 yards and two touchdowns. He also helped lead a dominant defense with an interception, a forced fumble and a fumble recovery.

The defense only allowed 136 yards to the explosive Tiger offense. A.J. Kirk had five tackles, three of which were for a loss, along with a sack. Darryl Peterson added three tackles — two for a loss — and two and a half sacks on the game.

Massillon Washington, one of the most storied teams in all of Ohio, lost the Division II championship game for the third consecutive season.

The game was changed from its original site at the Fortress Obetz, to Massillon’s home field of Paul Brown Tiger Stadium last minute because of the Franklin County stay-at-home order.

Hoban has built a dynasty, winning five of the last six state championships at the OHSAA Division II level.