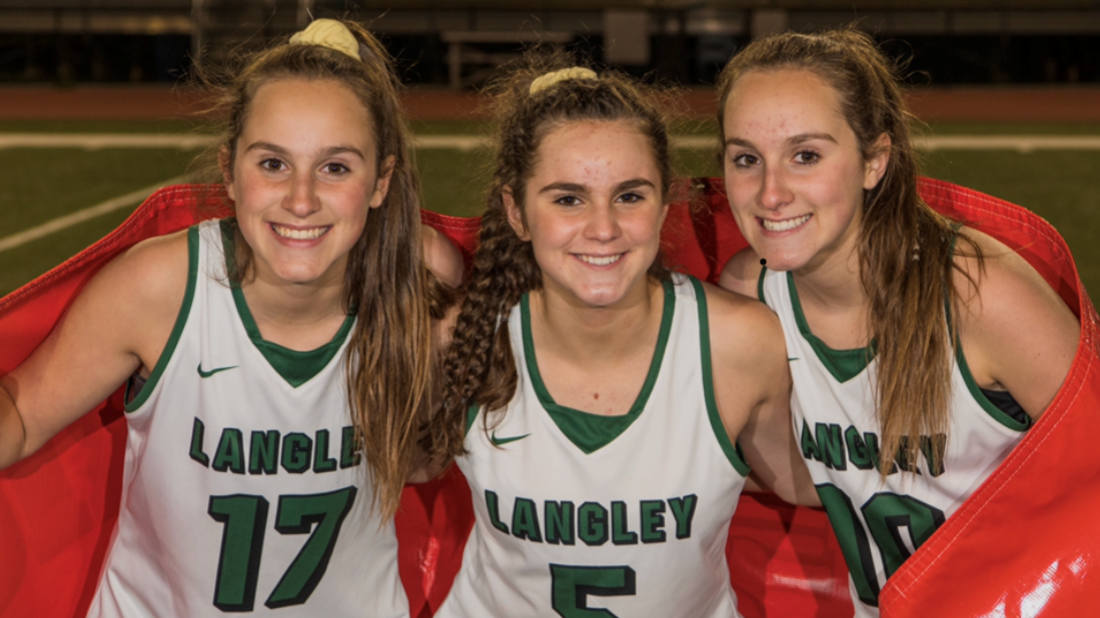 From left: Caroline, Sarah and Katherine Senich have been key cogs to the Langley Saxons girls lacrosse program. With older sister Sarah committing to VCU and twin sister Caroline and Katherine committing to Drexel University, the trio are among a large contingent of Saxons to move to the next level. (Courtesy: Nancy Senich)

MCLEAN, Va. (BVM) — In 2019, the Langley High School Saxons girls lacrosse team did something it had never done before: win a state championship. Among the pile of celebrating teammates were three sisters who had been tied at the hip throughout the season in then-sophomore Sarah Senich and her two younger twin sisters, then-freshmen Caroline and Katherine Senich.

“My sisters and I and our team are very dedicated athletes,” Caroline said. “We’ve all worked so hard. Countless hours in the gym every day. To get that recognition we deserved and to make that history we all worked so hard for it’s amazing. It’s literally like no other.”

They each had achieved greatness in their short high school lacrosse careers, but it was a long time coming for the Senich family.

As expected, when a family has athletes all of the same gender only separated by months or even hours, things tend to become competitive. Nobody wants to give an inch in any form of competition whether that be on the field, doing homework or even doing typically banal tasks. Everything becomes a proving ground and the same was the case in the Senich home.

“We’ve been competitive our entire lives,” Katherine said. “For everything. Whether it’s who got the last piece of bread for PB & J, we’ve always been competing against each other.”

This past spring, the Saxons were expected to have similar success that they had the year prior, with the potential of adding a second state championship in as many years. The Senich trio was expected to be big contributors to the team with Sarah leading the team’s offense as an attack while her twin sisters would help both sides of the ball with the two playing midfielder. With 11 returning starters, it wouldn’t have surprised anyone to see the Saxons back again in the state championship for the third season in a row (having lost the state finals in 2018).

However, this was not the case. Due to the COVID-19 pandemic, the Virginia High School League decided to cancel the spring sports season, closing the door on the Saxons’ chance to defend their title.

“It was disappointing, shocking, all of the above,” Caroline said. “It was heart wrenching.”

“It was horrible, we were all so depressed,” Sarah said. “The seniors’ last year really made our team the way it is now. It was a really sad experience to go through, but it was very moving. It motivated us to be better and keep on working and keep on getting through everything.”

A difficult time for any young athlete, the Senich sisters were left in limbo a bit. Emotions ran high and frustration seeped at times with the prospect of a lost season. Fortunately, the sisters had built-in teammates, confidants, sports psychologists and therapists in each other, something many other high school athletes didn’t have the luxury of having.

“If I was an only child on that team, it would be so much more stressful,” Sarah said. “We could relate to each other and talk to each other about it and discuss our feelings about it. It just brought us a lot closer. It’s gotten us to a point to push each other even more than we have.”

Although the sisters wouldn’t be able to represent their high school this spring, that didn’t stop them from putting work in to better their craft. While they may not have had a spring season, the girls were able to play lacrosse over the summer as part of the local club team Cardinal Girls Lacrosse Club.

“Luckily we had a few tournaments,” Katherine said. “It felt weird at first. The new normal that we had gotten used to was not being able to play with our teammates, but it felt so good to get back into the swing of things. It felt amazing to finally get our feet on that field, dig in that dirt and win a few more games.”

Through their experience over the summer, the Senich sisters were able to continue working on their skills while also being able to attract the attention from national scouts. The three were highly regarded by scouts earning a number of offers and this year were able to commit to their respective programs.

On Nov. 11, senior Sarah signed her National Letter of Intent to Virginia Commonwealth University as part of the Langley National Signing Day celebrations. While she had been verbally committed to the Rams for nearly a year, the moment was still special for Sarah.

“It was unreal,” Sarah said. “It was still really important because I had my family there and one of my best friends. I had a flashback and then I refocused myself and was like, ‘Damn I actually made it.’ It was probably my most important day.”

Sarah’s sisters were not left in the dust either however. While the juniors can’t officially sign with a program until their senior years, both Caroline and Katherine verbally committed to the Drexel Dragons in Philadelphia. While they won’t be playing with their older sister in their college years, the twins are happy to know they will have each other to lean on.

“We’re just so excited,” Katherine said. “We know how well we’ve been able to grow as players. Our entire lives since kindergarten we just love spending time with each other whether it’s on the field or whether it’s just practicing. It’s that aspect of always being with, I like to call her, a built-in best friend. We know we have such big things in store working with each other and just getting better that we are so excited.”

Always competitive, the news that the twins and their older sister would play for a national title shot against each other didn’t get missed by the sisters.

“After playing on the same team through rec and high school, it’s good to compete against each other again and have that little sibling rivalry,” Caroline said. “Have that taste of sweet victory over your sister.”

The Senich commitments were among nine total commitments by members of the Langley program to collegiate teams with a number going to Division I programs. Other Saxons are also expected to commit to the college level in the future.

With plenty of firepower and Division I talent on the team, it is no surprise that Langley is projected to be among one of the best programs in the state of Virginia heading into the spring season. As the team looks to win another championship, the Senich sisters are hoping to celebrate another state championship together before Sarah moves on to help the Rams the next year.

“The ultimate goal is to have fun and get back to normal as much as we can,” Sarah said. “Whether that’s playing in big championships or not. Playing in a state championship we’re going to give it our all. Fingers crossed, knock on wood. Two-peat, three-peat. I hope to at least accomplish a full season with them.”

Although they may not share a program in the future, the sisters will still be able to revel in their successes with the Saxons. With luck, the Senich family may celebrate even more championships in the future.