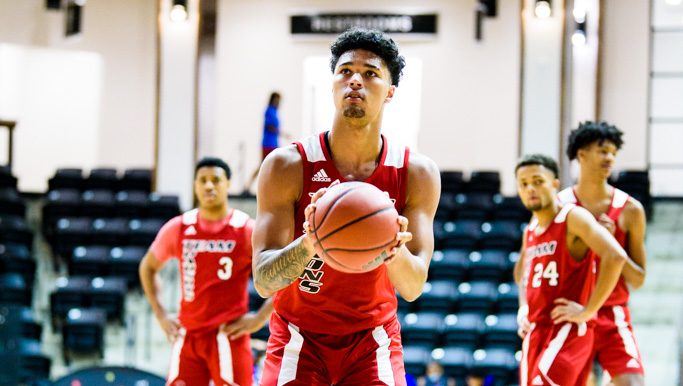 TITUSVILLE, Fla. (BVM) — The University of Illinois – Chicago men’s basketball team has been in the hunt for the Horizon League championship in recent years. After finishing as the runner up in the 2020 season, the team seems to be one piece away from the ultimate goal.

The recent commitment of Astronaut High School senior Jace Carter may be what puts them over the top.

The 6-foot-5 inch combo guard chose UIC over a dozen of other offers, and he did it before his senior year where he may have had the opportunity to attract other schools. However, Carter knows that his decision will put him in the best position possible to make an instant impact.

As opposed to going to a major program, the mid-major level will allow him to come in and contribute immediately.

“I knew the mid-major spot was the best for me. I wanna come in right away and make an impact and I felt that at that level that’s the best for me,” Carter said. “Knock on wood, if I would’ve got hurt, I didn’t want to take that risk. I was excited with UIC. I didn’t see any other school competing with them.”

Besides the potential of coming in and playing right away, Carter also appreciates the level of competition that the smaller Horizon League offers. With the conference consisting of many likewise teams, its games will be tightly contested.

“I feel like a lot of people take it for granted, ‘oh it’s just a mid-major school.’ There’s some really good schools in that conference that compete every night,” Carter said. “We aren’t going in, blowing teams out by 50. It’s a 10 to two point game. Every night is close.”

The future UIC Flame was taken aback by all the college attention, though. He had a few schools talk to him his freshman and sophomore years, but nobody took him seriously. Then his junior year, offers suddenly started flooding in.

It most likely had something to do with being named the 2018-19 Florida Today Boy’s Basketball Player of the Year, as well as a Class 4A third-team All-State selection. He finished that season by averaging 21.2 points, 9.4 rebounds and two assists per night.

Now in the beginning stages of his senior year, he looks to have gotten even better. UIC might have lucked out with this commit. In Astronaut’s opening night game, Carter dropped 40 points and followed that up with an encore performance of 25 points and 19 rebounds.

“During quarantine I took a big emphasis on getting my body right. I was 205 going into quarantine, now I’m 220. I feel like I’ve got a lot better and stronger,” Carter said. “ I also look at the game a lot differently. I feel like I play a lot more freely because I know I’m going to school.”

But credit was given where credit was due. Carter understands that this evolution of his basketball game couldn’t have been done by himself. He attributed his love of the game and development to his parents who were there every step of the way.

Carter’s mom was actually a very good player in her own right, going on to play DII basketball at Florida Southern University. Her talent was passed down to the next generation.

“They kind of instilled in me that basketball was an important thing and I fell in love with it. My dad worked me out as a kid, and growing up he taught me a lot of things,” Carter said. “Without my mom and dad I wouldn’t be where I’m at at all. They put a lot of money into me, and helped me succeed the most.”

Now UIC head coach Luke Yaklich and the remainder of the staff anxiously await the arrival of Carter on campus so that they can complete their quest for Horizon League dominance. When he does land in Chicago, he’ll be ready to rock.

“They are about winning, about the things me and my family rep a lot,” Carter said. “I feel comfortable and that’s where I want to be.”