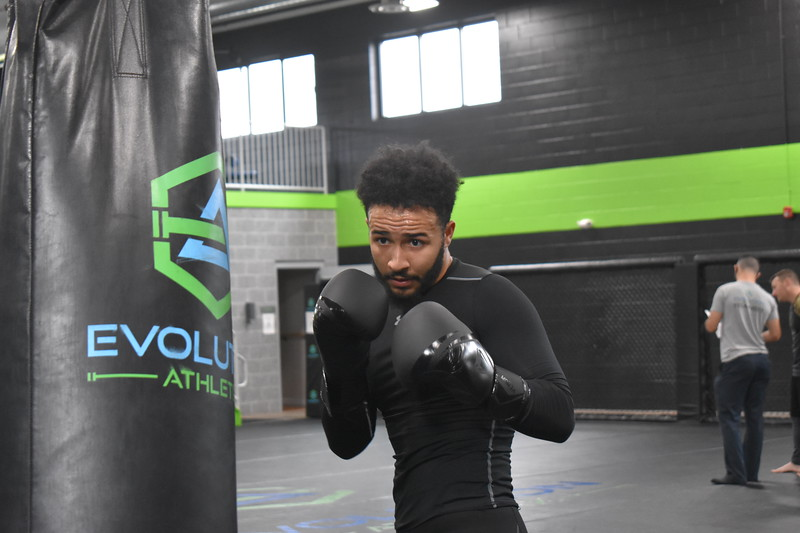 BIDDEFORD, Maine  (BVM) – Julian Connerton has had a busy year. Training for MMA and jiu-jitsu flights that will be taking place in 2021, Julian is in the gym almost every day of the week. As a student, he is taking both law and sports management classes at the University of New England. And for the past year, he has started to become who he really wants to be.

In the gym six days a week, Julian can escape the reality of being a stressed student. Once he steps foot into the gym, his focus falls on himself. He lets outside worries go, puts on his headphones, and turns the volume of his motivational music up. Julian has had to work for everything he has and has never been given a break.

He has many goals set for himself, including being a 3-0 amateur mixed martial artist. He has high hopes to get more than three fights to make it a 4-0 or a 5-0 record. Julian is a very hard worker and intends to break every record and achieve every goal he has for himself.

As he continues to strive towards those goals, a double major in sports management and business. He also minors in coaching and nutrition. Imaginably, he has a lot of time and energy that is devoted to his schoolwork. And with this forever evolving and changing world, Julian has been doing nothing but keeping his head up because he is trying to spend as much time doing the things that feel normal to him.

On top of fighting and schoolwork, Julian is also on the football team. He played for the past two years as a linebacker. For the 2020 season, COVID pushed off their official football season, so he is on a leave of absence to focus on fighting. His coaches and teammates have nothing but support for Julian as he continues down a new and exciting path for him.

To keep up with his busy schedule, Connerton stays consistent and stays on top of his daily tasks. Being a person that needs to follow an outline for a day, Connerton has obligations that he can not miss. Connerton is also a big self-critic. He tends to fall very hard on himself, which in turn wipes him out. In turn, managing his time and his schedule becomes more important to his physical and mental health.

Julian has always had struggles in his life, and all of his struggles has led him to become a very passionate person on many topics. Including making a difference on campus and changing himself for the better.

“I’m sure everyone is fighting something, but not everyone is putting their fight towards something positive or using that fight as fuel to do something else, which is what I am doing,” Julian said.

As Julian moved forward, he had a big push from quarantine that motivated him to start focusing on himself. Where many people saw COVID and quarantine as a curse, Julian saw it in a better light.

“Covid lead me to a lot of uncomfortable places that I am still trying to solve, but I know that during COVID, it brought me closer to fighting again,” Julian said. “COVID is what gave me time to focus and decide what I want to do and chase.”

COVID did a lot of damage to Julian and took a lot from him. But in return, he found someone special. His girlfriend has his back, motivates, encourages, and inspires him to do his best when he wakes up every morning. Julian says that it is always good to have someone by his side that is consistent and has been through it all with him.

But at the end of the day, Julian is a firm believer that everything happens for a reason and that he is exactly where he is at this moment for a reason. He is happy to be where he is, fighting how hard he is because he knows that he will be where he wants to be one day. He looks back at his past and acknowledges it for one of the many motivations he has. He talked on the topic of what he thinks his past self never saw him doing.

“Changing, my past self would have never seen how willing I am to change and take lessons as they come,” Julian said. “Everything I go through or do as a person shapes the type of person I am supposed to become.”