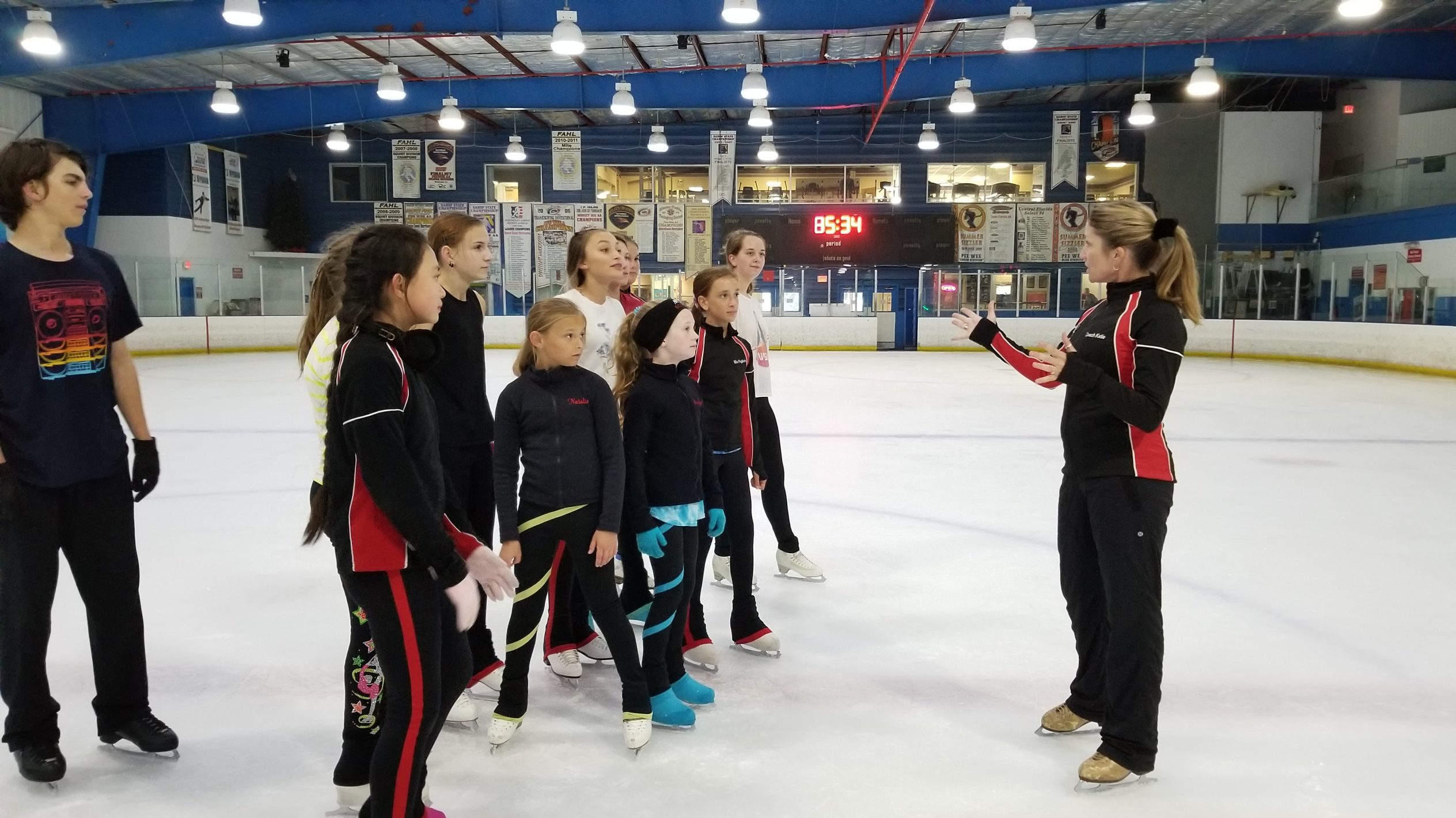 Due to COVID-19 restrictions, it operated on a smaller “recital “type scale. Theatre is just a small part of this show, it included all local skaters; some in solo performances, and others in small groups. However, this show allowed for all skaters the opportunity to show off their skills in Christmas routines. All levels and all ages were showcased, including the Theatre team group performances. Let’s learn more about the Theatre on Ice Program British born director, Katie Nyman.

Katie Nyman is the Director of the Theatre on Ice Program. Hailing from Britain, she is an accomplished skater. Training as a singles skater in London as a child, she was just 18 years old when she choreographed an entire Christmas production at her home skating rink. A background in dance, a mother who was also a dancer, and a grandmother who was a ballerina, performing runs in her blood.

She has performed in many ice show productions all over the world. During the 1990s, she toured the world in Professional Ice Productions, and in 1998, she starred in the British television production of ICE WARRIORS. On this show, she played the role of Ice Warrior “Krystor the Enchantress.” These were amazing experiences that she will always treasure.

Nyman’s experience in dance and skating is a perfect fit for the Theatre on Ice discipline she learned in Europe. When she came to America to coach in 2003, she brought this discipline with her to the Iceplex and created the Space Coast Hurricanes Theatre on Ice teams.

The teams have competed at US Nationals since 2005 and are one of the top teams in the country. This was the first year they have missed national competitions, not because they were not good enough to compete, but because of restrictions with COVID-19. Since 2003, her teams have qualified for World Championships five times and she has taken skaters and families to France and Spain.

Theatre on Ice is for a wide range of skating abilities. Ages range from 5 years old to over 70! They have 5 teams in total and about 80 skaters. This includes an adult competitive team called the Space Coast “Frozen” Hurricanes with skaters of advancing years often skating as well! Nyman continues her passion for ice skating by being on the adult team with many of the Iceplex coaches.

Sound like something you or your child is interested in? The first level, the Intro team, recruits skaters from the Iceplex Skate Academy Classes. Any interested skaters can sign up with the Iceplex group lessons to begin their Theatre on Ice journey. There is a requirement to complete a few basic levels to join the Intro team.

There are also higher competitive level skaters on the junior team. This team includes national champions, regional and sectional level competitors. The other two levels: Preliminary and Novice, are in-between so they are very structured, based upon skating level. Iceplex has the only national competitive teams in the state of Florida. The nearest program is in Atlanta as many are in the northern states.

Theatre on Ice teaches the students more than skating and performing. Team skating skills, confidence in performance and showmanship, (which are very important attributes for a competitive skater as well) but most importantly, they have fun! The skaters enjoy getting on the ice for the weekly training sessions with their friends. Figure skating is usually an individual sport, so many skaters enjoy this program because they are with others.

In addition to this program, Nyman has coached several high-level competitive skaters including her son, and he won US National Championship titles in 2013 and 2014. She spends 7 days a week at the Iceplex, and mostly on the ice. Her day starts at 4:30 am as she coaches all levels of figure skating, test skaters, private lessons, recreational levels, and adults. This is in addition to the Theatre on Ice program. Nyman says, “ They (the skaters) have one thing in common, they love that feeling of gliding across the ice even at 6 am! And they want to be the best they can be. Figure skating has been my life for over 40 years and I don’t anticipate it ending any time soon!”

If you or your child are interested and have figure skating experience, you can contact Katie Nyman to arrange a tryout and team placement. skatiekatie@spacecoasticeplex.com. Also check out the website: www.spacecoasthurricanestoi.com. If you want to learn how to figure skate, or work on your skills, check out the website for more information. https://www.spacecoasticeplex.com/